SAA is being forced to cut its fleet 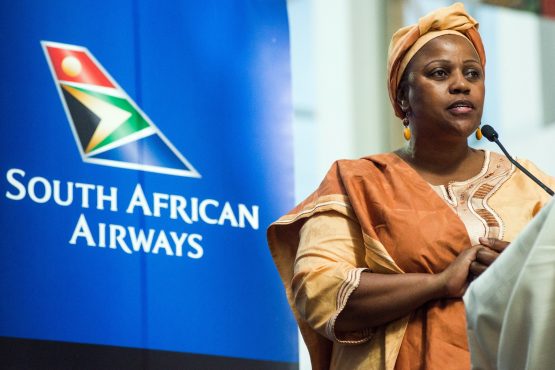 The SAA Pilots Association is pursuing a case against chairperson Dudu Myeni (pictured) to have her removed as a delinquent director. Picture: Waldo Swiegers/Bloomberg

Embattled South African Airways (SAA) is being forced to cut its fleet as its precarious financial position raises doubt over whether it can continue as a going concern and the airline is forced to reschedule terms with suppliers.

This was revealed to Moneyweb by the chairman of the SAA Pilots Association, Jimmy Conroy, who represents 721 pilots of 725 currently employed at the airline. “We were advised at a meeting in early August that they planned to reduce their current fleet of 65 aircraft by as much as 10,” said Conroy.

But due to the deteriorating financial condition of the airline, SAA’s board cannot approve contracts for durations longer than six months as they may be accused of reckless trading. This means that in the case of aircraft that are typically leased over a period of years, the owners are not happy renewing or extending leases for short periods when they can enter into leases for years with other airlines.

According to Conroy, this would entail SAA returning five of the wide-bodied aircraft it currently leases and transferring four narrow body aircraft to other airlines, amounting to nine in total or roughly equivalent to 20% of its fleet (see table).

This means aircraft that SAA utilises are now becoming not a function of the routes and passenger capacity they require, but are instead being determined by what they can continue to lease. This partly explains why some popular routes – like Johannesburg-London for instance, are being downscaled as part of broader plans to reduce flights by as much as 700 per month.

While these changes have all been mooted, nothing has been signed off yet. This is probably to allow incoming CEO Vuyani Jarana time to review the airline’s state of affairs and approve changes that could lead to a significant reduction in headcount.

When asked about whether the airline had communicated any plans to reduce the number of pilots, Conroy said that no discussions had been forthcoming. “In the wake of the planned reduction in flights, this left us scratching our heads.”

SAA’s pilots have postponed any negotiations surrounding wage increases that were due to start for the new financial year beginning in April to give the airline time to get back on a sound financial footing.“We will continue to pursue our case against chairperson Dudu Myeni to have her removed as a delinquent director.”

Asked to confirm how may suppliers had not been paid for August, SAA spokesperson Tlali Tlali, stated the following: “We have a duty to ensure that we maintain our relationship with all our suppliers. We are in liaison with them on a continuous basis and have payment terms and/or arrangements in place with all of them.”

Tlali did not respond to questions regarding the reasons for reducing the fleet.

Why is Government stubbornly holding on to SAA which obviously is a dead loss and a
dinosaur from a bygone era? My guess: (1) SAA is regarded as a pot of money for the Zuma Administration to dispense largesse and enrich politically connected cronies. (2) SAA gives jobs and jobs buy votes for the ANC. Head office at SAA is probably full of employees who achieve very little hence the perpetual financial loss. However, sitting around all day looking for an opportunity to get something for nothing and getting paid for it is a good deal. (3) SAA is willing to fly routes to African destinations like e.g. Ndola, Harare, Lubumbashi and Brazzaville which no other airline is willing to take on because it is not profitable. However, in solidarity with the African continent, big brother SA has to spend money on something which nobody else is willing to do.

the only time i fly Saa is when i fly overseas and they partner with another foreign airline.
locally i use kalula. time for anti – zuptas to put their money where their mouth is and boycott these thieving gravy enterprises.
give them some of their own medicine

Its the staff complement stupid!
SAA is grossly overstaffed(believe it or not), you need to cull the staff numbers.

Ja – the real start of the death spiral

Now I would have thought that the popular routes are where the most revenue comes from.
Oh, unless the passengers are not the paying ones – but then would the freebie routes be cut?
Like the JNB-CPT one.

Benchmarking against other airlines, locally and globally, it’s clear to see that staff numbers are the problem. You pay staff that don’t add value to the paying customers.

I gave up flying SAA years ago. Maybe that’s why they are now in financial trouble (ha ha)