The once-dominant national carrier is on the back foot as it resumes operations with a modest fleet.
By Akhona Matshoba 23 Sep 2021  00:01 Among the passengers on the first flight to Cape Town: forensic investigator Paul O’Sullivan, who wants those responsible for turning the airline into a victim to be held accountable. Image: Moneyweb

South African Airways (SAA) is back in business. Thursday morning sees the slimmed-down airline operate its first flight – from Johannesburg to Cape Town – after the airline was grounded in March last year.

The airline resumes operations as a shadow of its former self, operating just six aircraft – down from 46 in its heyday.

SAA CFO Fikile Mhlontlo said in a media briefing on Wednesday that South Africans can lay their fears of travelling in old aircraft to rest, as the airline has signed new leases that come with new aircraft.

“The fleet that we had was returned to [the] lessors. We are starting with a new fleet as part of the new lease arrangements, so some of the issues that were related to the [previous] fleet should be issues of the past,” Mhlontlo said.

The airline will resume regional operations next week.

SAA interim CEO Thomas Kgokolo told parliament at the beginning of the month that SAA will operate return flights on the popular Johannesburg-Cape Town route three times a day. Its regional service will include daily return flights between Johannesburg and Harare in Zimbabwe, with three return flights a week to Accra in Ghana, Kinshasa in the DRC,  Lusaka in Zambia and Maputo in Mozambique.

At the relaunch of the airline, Kgathatso Tlhakudi, deputy director-general in the Department of Public Enterprises, said there is no longer room for bailouts for the national carrier and restoring the airline’s financial position will now lie squarely at the feet of SAA’s proposed new owners, the Takatso Consortium. 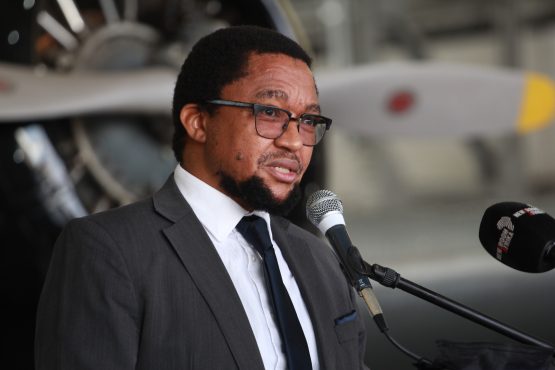 “Going forward [SAA has] been put in the hands of business people … people [who] have the technical skills,”said Tlhakudi.

Return to profitability will take time

Takatso was announced as the preferred bidder in SAA three months ago, setting out to invest R3 billion over the next three years to turn the airline around and make it profitable.

Read:
Government sells majority of SAA to private entities (Jun 11)
PIC owns 30% of Harith, but ‘is not involved’ in 51% SAA acquisition (Jun 14)
Takatso says it is still in talks over SAA investment (Sep 22)

The last time the national airline reported a full-year profit was a decade ago. It has since been entangled in a distressing web of mismanagement that has cost taxpayers hundreds of millions of rands in bailouts.

Mhlontlo said given that the Covid-19 pandemic has put the aviation industry – and the wider travel and tourism sector – under significant strain, it will take a while before the airline starts making a profit.

“We are coming from being an airline which [had] about 46 aircraft to an airline that is starting very small – starting with about six aircraft. So it’s a gradual exercise.”

He added that while aviation is a “difficult industry” the new team has done a host of things to at least start in a direction where the airline “really stands a chance”.

Good governance and no political interference

SAA interim board chair Geoff Qhena said the board, as a transitional structure, is focused on instilling a culture of good governance at the airline and is optimistic that political interference will be a thing of the past.

“The ethos of management where you have government and changing political leadership of the airline from one minister to the other – that will no longer have that kind of an impact as we’ve had previously,” Qhena said.

“The appointment of senior leadership and the appointment of board members [is] going to be based strictly on merit, where the private sector shareholder of course has a stake in the success of the industry, and they will be much more aggressive in ensuring that is done,” he added.

Read:
The NPA should investigate the allegations against Dudu Myeni
SAA’s ex-chair Dudu Myeni banned from directorships
Why did PwC not identify corruption at SAA?

The low-cost airline’s flights were grounded for the second time after it failed to honour outstanding payments to Air Traffic Navigation Services and went into business rescue at the end of July.

‘starting with about six aircraft’
This means more or less six.
Is this five, six or seven?

I think it depends on how many stay airborne !

Godspeed SAA – may you experience blue sky and tailwinds. And keep your grubby hands out of the taxpayer’s wallet

And may your unicorn hunt be successful

Unfortunately this relaunch is still costing the tax payers. The private equity deal has not been concluded yet and, therefore, no money or management skills have been advanced. The board that has made the decision is still all occupied by Government.

Like all BEE deals … its out to benefit a selected politically connected few…. at the cost of the tax payer

And on Monday next week they will petition the Govt. for a bail out. R8b should do it for the next 6 weeks.

Fly at your own peril !!

Lets see if the crew gets the take off weight right this time . Interesting times .

I still will not fly SAA, it represents the epitome of “Transformation”, “BEE”, “State Capture” and Corruption.

The new owners have paid a really hefty premium, probably because it has some “preferential benefits”.

A day or 2 ago it was reported that the deal with Takatso is still in progress and will take some time to conclude as it is very complicated????

So what if something goes wrong with the deal??? WHO IS GOING TO PAY????

As the former SARS Commissioner, you would have expected Pravin Gordhan to come out with a proper plan

5 or 6 or 7? Not quite sure are we, even a big ticket item like an A 320 should not just be missed. One thing this little airline should know is the number of planes they are operating.

what time is the first flight? Just checked my Flightradar and not one SAA in the air. 7.40am. Maybe like CR with important things they are already running late?

im sure … all the Pilots have left the country by now….

Huge demand in Dubai and across the world for SA pilots

Not, know quite a few pilots, Covid has crushed that demand. Might pick up but for now it wont. Emirates and others in the middle east actually retrenched most ex pats.

The cadres sky taxi’s are running again. It’s one risk I will avoid. It’s a matter of time. Watch this space.

Fly SAA again? Nah, not likely! There are other airlines that stood on their own feet, or shall we say, flew with their own wings throughout the pandemic and are therefore more deserving of my support, besides, who wants to fly to Zimbabwe when there are so many more interesting places in the world?

I wonder what the current board members’ salaries are … including free flights.

If you set foot on ANC Airways, then you need your head read.

“Mhlontlo said given that the Covid-19 pandemic has put the aviation industry – and the wider travel and tourism sector – under significant strain, …” The lockdown has caused the strain not the strain of the virus!

As for SAA – how many billions of taxpayer’s funds are going to have to be spent to keep this albatross around taxpayer’s necks in the air?

I hope and Pray that all our SAA Pilots rated best in the World find work somewhere in the World to see to their Families. Our loss.

Well done Dudu, Jacob, Gigaba and others. What goes around comes around.

Don’t blame it on Covid which has become the flavour. Corruption, Theft wrong leadership and of course the Gupta’s.

Yet thay are free yet a lot of good SAA people have no work.