Sale of subsidiary saves hundreds of jobs at Group Five 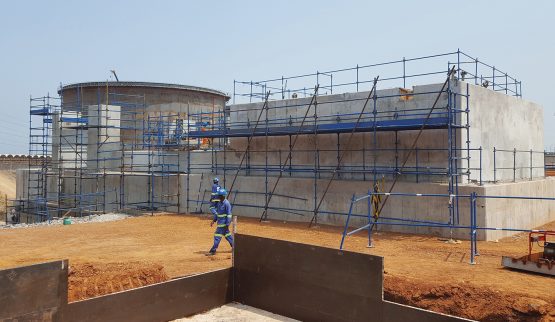 The disposal of the rest of the former construction giant’s assets should be completed by the end of the first quarter of 2020. Image: Moneyweb

About 500 jobs have been saved by the sale of Group Five Projects – a subsidiary of Group Five Construction, which is in business rescue – to the Mauritian-based Teichmann Group for an undisclosed amount.

Peter van den Steen and Dave Lake, Group Five’s business rescue practitioners (BRPs), announced the disposal on Monday and indicated about 500 jobs would be transferred to the new owners and saved.

They said these employees were mainly African-based and comprised a combination of permanent employees and contractors.

The BRPs added that the transaction included various of Group Five’s African construction businesses that were leaders in structural, mechanical, electrical, instrumentation and piping construction throughout Africa.

They said the purchase comprised all of Group Five Projects’ assets, including the construction plant and equipment in these locations.

However, they said an existing construction project on a mine in Zambia would still be completed by Group Five, as would a further project in South Africa.

“The new entity will be branded as T3 Projects. The team’s track record in Africa has ensured the effective and efficient delivery of construction projects in the mining and industrial sectors across the continent, which will complement the Teichmann Group’s existing product offering,” they said.

Group Five Projects was one of 38 assets and properties identified for sale in Group Five Construction’s business rescue plan. The BRPs declined to comment on the value of the disposal transaction.

Attempts to obtain comment from the Teichmann Group were unsuccessful.

The BRPs also declined to comment on the number of Group Five Construction assets sold to date and the total amount of money received for them, adding this information would be provided soon via another business rescue update.

The BRPs confirmed that all other assets, financial or otherwise, of the company were being vigorously pursued and/or disposed of in controlled disposal processes.

Although they indicated that certain of these sales processes included complex sales of international assets, and/or regulatory procedures and approvals that were outside of the control of the BRPs, they anticipated completing most sales by the end of March 2020.

Group Five Limited and Group Five Construction, its main operating subsidiary, decided in March this year to voluntarily apply to be placed in business rescue, and for trading in the group’s shares on the JSE to be suspended.

This followed Group Five Construction incurring losses totalling R2.1 billion in its 2017 and 2018 financial years. In addition, about R2.3 billion in losses were incurred in the eight-month period to February 28 this year, with major losses and material negative cash flows forecast for the group for the balance of this calendar year.

The majority of South Africa’s major construction groups have experienced financial difficulties in the past two years, largely because of major government infrastructure projects drying up.

Creditors in Group Five last month voted overwhelmingly in favour of the business rescue plans for the listed entity and Group Five Construction.

In terms of the business plan approved for the group last month, Group Five’s listing on the JSE will be terminated and the company wound up but between 3 000 and 3 500 jobs saved through the restructuring and sale of businesses and contracts to new owners.

The BRPs believe the shortfall or losses to creditors from the business rescue processes will be R5 billion less than under a liquidation.

On successful implementation of the business rescue plan, secured creditors are expected to receive distributions of between 66c and 78c in the rand compared to 18c forecast in a liquidation.

Concurrent creditors (people and entities with unsecured claims) are expected to receive distributions of between nine cents and 20c in the rand compared to the 3.4c forecast in a liquidation.