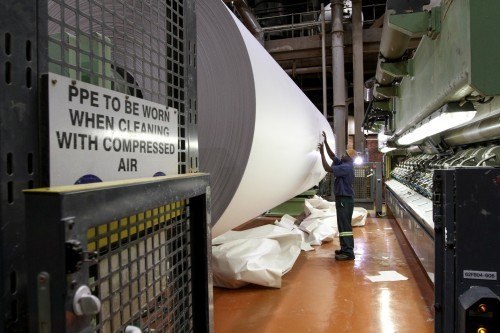 Sappi gained the most in seven years after the world’s biggest maker of dissolving wood pulp reported a surge in second-quarter profit following a rise in sales and prices of the cotton substitute.

The stock soared as much as 17%, the most since April 2009, and finished 6% higher at the close in Johannesburg. The shares have increased for four consecutive days to the highest since April 5, valuing the South African company at R35 billion ($2.3 billion).

“Our strategy to re-position Sappi as a profitable and cash-generative diversified wood-fiber group remains well on track,” Chief Executive Officer Steve Binnie said in a statement on Monday. The growth in second-half earnings before interest, taxes, depreciation and amortization, excluding special items, is expected to be in line with the first half of the year, he said.

Sappi, which started as a paper and pulp maker in Johannesburg in 1936, is diversifying its production as the demand outlook for glossy paper weakens as a result of a global corporate shift to digital publishing and advertising. The company’s more profitable dissolving wood pulp, which is used in textiles including lingerie and golf shirts, has also benefited from rising U.S. dollar sales prices over the past year. Dissolving wood pulp prices will remain stable in the second half, Binnie said.

Net income for the three months through March increased to $100 million, compared with $56 million a year earlier, the company said in a statement. Net debt fell to $1.65 billion on the back of healthy cash generation, compared with the $1.92 billion at the end of the same quarter a year ago.

“We should continue to reduce our debt and it will be closer to $1.5 billion by the end of the financial year,” Binnie said. “Across all of the group we continued to look for cost containment initiatives. You’ll see that in the US and Europe our costs were down.”