Says it has dealt with instabilities over the past few months.
By Palesa Mofokeng 14 Dec 2021  11:09 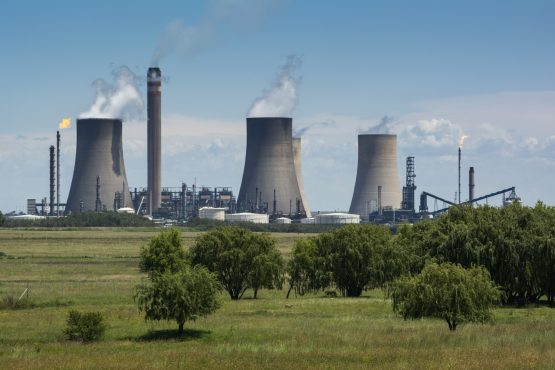 Vapour rises from the cooling towers of the Sasol Secunda coal-to-liquids plant in Mpumalanga. Image: Bloomberg

Sasol has revised down its forecast Secunda Operations (SO) production volumes to between 6.7 million tonnes and 6.8 million tonnes for the 2022 financial year. “Based on actual performance and our coal purchase strategy, we expect Mining operations to achieve an average productivity rate of between 950 to 1 040 t/cm/s for financial year 2022,” it said in a trading update on Tuesday.

This follows a previous revision in October, when the fuels giant said it expected production volumes for SO to be between 7.3 to 7.4 million tonnes (down from 7.4 to 7.5 million tonnes). That reduction was ascribed to “unforeseen delays during the September shutdown, interruption of power supply from Eskom, poor coal quality and other operational instabilities.”

Read: Sasol special report part 2: How do you solve a problem like Secunda?

In the update issued on December 14, Sasol says that since the end of October it has encountered three major production impacts at the Mining division, resulting in over 1 million tonnes of lost coal production.

“Collectively, these incidents contributed to just over 50% of the coal production shortfall.”

Besides safety incidents, its operations were negatively impacted by adverse weather conditions and some significant operational challenges as well as a slower-than-expected Fulco ramp-up.

“As a result, production run-rates decreased to below 1 000 t/cm/s and we had to utilise the coal stockpile which, as a result, decreased to below our targeted stock level. External coal supply from our long-standing commercial supplier was also interrupted as a result of wet weather, significantly impacting the supplier’s ability to provide us with our contracted off-take quantity.”

Sasol says the lower coal availability hampered its ability to effectively blend coal, which resulted in lower yield rates in the gasification process at SO.

It has thus reduced SO production rates until mining productivity rates increase, and its coal stockpile is rebuilt to well above threshold requirements.

This is a disappointing blow for the company, especially given its ‘Sasol 2.0’ goals.

“We are committed to gradually lifting production rates as coal availability improves, while carefully monitoring the supply and demand balance,” it added.

Sasol says it will also supplement its production shortfall by purchasing coal on the open market, however, it is not possible to determine the shortfall at this point.

“Our first objective is to ensure that we restore the integrity of the stockpile to a level of above ~1.2 million tonnes by the end of quarter 1 of calendar year 2022. Following this, we plan to gradually increase the pure gas loads through increased coal supply to SO in an effort to improve the run-rate.

“We are targeting a stockpile level of ~1.5 million tonnes and will further improve the gas loads for SO by quarter 2 of calendar year 2022. Improving the coal quality will take some time and we will update the market of our progress during the following months.”

Sasol says the operational instabilities at its SO have been largely resolved (as of December 13) and it has seen major improvements in gasifier and boiler availability in the Synfuels facility over the past three months.