Cornell has been more involved in the Lake Charles project, where costs are soaring, and is paid more than his co-CEO.
By Loni Prinsloo and Antony Sguazzin, Bloomberg 30 Aug 2019  08:25 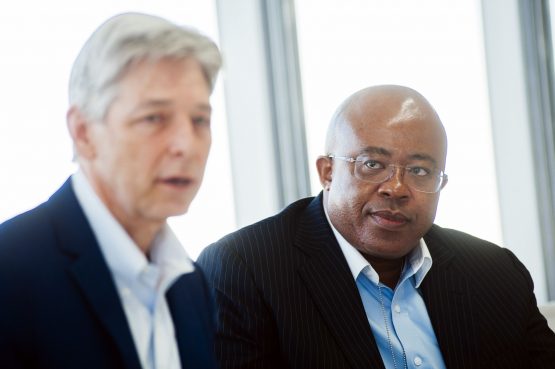 Sasol has been asked by some of the country’s biggest fund managers to consider executive changes including ousting Stephen Cornell, one of two chief executive officers, over cost overruns at a flagship project, according to people familiar with the matter.

The money managers began meeting with Sasol’s board and leadership after it raised the estimated cost of the Lake Charles plant in Louisiana by $1 billion on May 22, having increased it only three months earlier. Investors including Allan Gray and Coronation Fund Managers want management to take responsibility for the escalation in costs at the $13 billion chemicals project, the people said, asking not to be identified. Allan Gray and Coronation confirmed they met with Sasol but declined to comment on the content of the discussions.

The companies both own stock in Sasol and are South Africa’s third and fifth biggest fund managers.

Some investors also questioned the need for the company, which is South Africa’s biggest by revenue, to have co-CEOs, the people said. They suggested that Cornell leave and Bongani Nqwababa be retained.

Cornell has been more involved in the Lake Charles project and is paid more than Nqwababa, boosting costs, they said. In the year ended June 2018, Cornell was paid R46.3 million ($3 million) in salary, benefits and incentives, while Nqwababa made R25.9 million, according to the company’s annual report.

“It would not be appropriate for Sasol to comment on behalf of its shareholders,” the company said in an emailed response to questions. Earlier this month, Sasol confirmed that it met with a number of shareholders to “hear their views, concerns and expectations.”

Concern has grown over the costs of Lake Charles with Sasol on Auguat 16 delaying its annual results, saying that it hadn’t completed a review of the problems at the project.

Since the May announcement, the stock has fallen 34%, the most on an index of the 40 biggest companies traded in Johannesburg. Sasol, which produces chemicals around the world and motor fuel from coal in South Africa, has a market value of R176 billion.

Cornell has held his position at Sasol since mid-2016, after serving as executive vice president of international operations for the company for the previous two years. Before that he worked for BP.

These have to be the worst CEOs in the history of Sasol. I really miss the days of homegrown CEOs and FDs.

Maybe the SA financial discipline is not suitable to an American or the – culture which appears to be sloppy, if Tesla is anything to go by?

I wouldn’t talk about financial discipline or ‘culture’ as a South African. You guys are honestly a bit of a joke.

Fire the one that engaged Fluor on the project.

Did you get fired by them?

Hardly their fault if Sasol can’t run Sasol’s own projects.

Go and look at their history. They do it all over the world.

I’m like a stuck record on SASOL because no one will yay or nay me. SASOL developing in the US is like Woollies opening stores in Oz. A vanity trip with spin offs for the executives.

Most of SASOL’s profit is from SA where it enjoys subsidisation and monopoly. It can never compete in the first world.

Well they have been competing in 32 countries (including the first World) for decades now so I think you are a little slow. A child could google that.

Also this is not a matter of competing yet. The plant is not yet finished.

Maybe people won’t engage with your question because it is one that is rather silly?

Totally agree. Also, like clockwork all these Foreign Strategies are folding.

No offense but why on earth would a South african with less talent, tech, innovation be able to accomplish what a US firm cannot?

I love Shoprite and hold quite a few shares. My message to mgmt would be to GET out of africa. We are still many many years away from stabilisation. Let other retailers burn cash. Focus on dominating SA. Eastern Europe is far more intriguing but start slow.

Quite interesting how an exact copy of the Sasol
Plant was built down the road in Lake Charles at a fraction of the cost (finished within a few months) and more output! Madness. Reminds me of the Minas-Rio mine in Brazil for Anglo American.

But remember. Bigger projects equals bigger paydays for execs. I mean who cares about IRR right? “Empire building” in the CFA exam seems to be a real thing. Fire all these greedy okes.

In terms of what is significant to me, I also invested quite a bit of my savings in the company. I realise I only less than 0.0001% of the company, but I agree! You can’t be in such a senior position and take paygrades of that order of magnitude and drop the ball like this. All of the above said, it is a tough project to pull off. If there is one more (even the smallest) glitch on LCCP, you need to be send packing.

You have R18M in Sasol? Impressive!

Percent not a fraction. Not impressive at all.

Unlike the South African Government, hopefully in the corporate world the buck stops somewhere! While always a cyclical business Sasol has gone from the staple holding to an OMG investment.

He is a tremendous asset to the SA talent pool. It’s daft to vilify foreign competence in favour of some imaginary wisdom of the night.