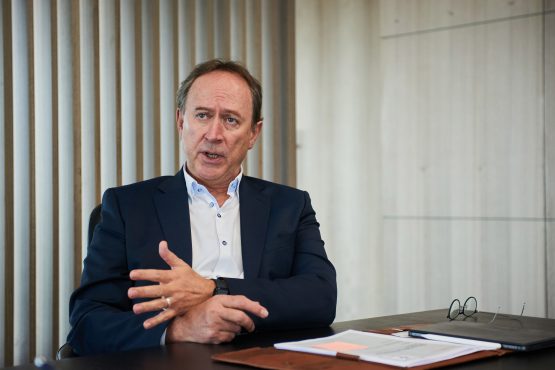 Fleetwood Grobler, chief executive officer of Sasol, during an interview at the company's headquarters in Johannesburg, South Africa, on Tuesday, April 12, 2022. Image: Bloomberg

Europe’s scramble to find new sources of energy to reduce its reliance on Russia has given Sasol, South Africa’s biggest fuel producer, a new purpose to accelerate its green hydrogen plans.

Sasol is focusing on green hydrogen – made by machines called electrolyzers that are powered by the wind and sun – in South Africa’s northwest coast. The company is doing a feasibility study that it expects to complete in two years, according to Sasol’s chief executive officer Fleetwood Grobler.

Sasol will no longer consider gas supply from a planned pipeline stretching from fields in northern Mozambique to its South African operations because it doesn’t want to get stuck with the infrastructure as the world shifts away from fossil fuels, Grobler said.

Read: Sasol drops plan to invest in pipeline in favour of LNG imports

“The impetus for renewables like hydrogen has gone up a couple of notches in the last two months,” Grobler said in an interview. “What in my mind changes is that we should move quicker and faster on our hydrogen plays.”

The surge in energy demand can help Sasol, which has been converting coal into synthetic products for more than half a century, pivot to cleaner fuels faster. South Africa’s second-biggest polluter didn’t even have a plan to transition to green energy until a little over a year ago, Grobler said. It is now – like Shell and TotalEnergies – targeting to reach net-zero emissions by 2050. 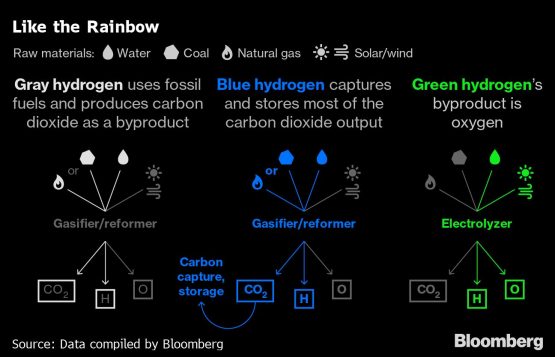 The invasion of Ukraine has Europe searching for new energy sources to starve Russia of funds to fuel the war. Green hydrogen will be an important part of the mix. The European Union doubled its goal for green-hydrogen capacity to 80 gigawatts by 2030, compared with less than 1 gigawatt currently. The UK just set a target to produce at least 5 gigawatts of capacity by 2030.

Still, it will take Sasol at least five years to begin exporting the clean fuel. The key will be to bring prices down from about $5.5 a kilogram to $1, Grobler said. The company plans to take on partners, but he declined to give an overall cost estimate.

South Africa “will face competition from would-be exporters who are further along establishing a green hydrogen production pipeline,” which include Australia and Chile, said Antoine Vagneur-Jones, an analyst at BloombergNEF’s energy transitions team.

It’s crucial for Sasol to get the transition right. The company recently managed to recover from a catastrophic string of issues including an oil price crash and a US expansion of its chemical business that went over budget, increasing its debt burden and sinking the stock to a 20-year low. 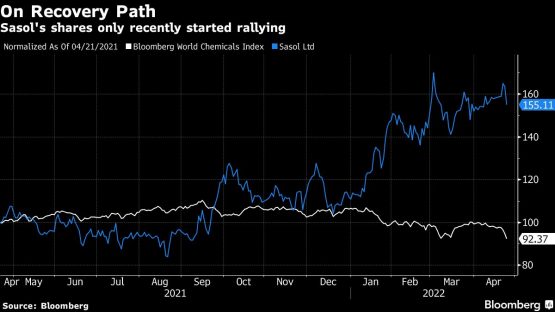 Sasol now wants to avoid making significant investments in natural gas infrastructure such as a planned pipeline that would stretch to fields in northern Mozambique.

“We know that the sunset of the oil industry is staring us in the face,” Grobler said.

Sasol is studying the possibility of obtaining as much as 3 000 megawatts of renewable power to make 100 000 tons of green hydrogen for export. That could be a challenge as Africa’s most-industrialised nation struggles to generate enough electricity.

“From Saldanha Bay to Walvis Bay is the best endowment of sun and wind in southern Africa,” Grobler said, outlining a former steel-making centre of South Africa and a port in Namibia along the West Coast.

Sasol’s Boegoebaai project would act as a “first peg” of the plan that would then expand domestic use of the fuel, potentially building a pipeline that would reach the provinces of Gauteng and KwaZulu-Natal, he said.

Aviation fuel is another opportunity for the company. Its Fischer-Tropsch technology — named after the Germans who developed it in the 1920s — is helping it develop synthetic jet fuel.

The technology, which the company says can capture carbon directly from the air to produce carbon monoxide can then be combined with green hydrogen to produce aviation and other fuels.

Grobler said the company is already speaking to as many as five “major” airlines.

Sasol’s plans to turn to green fuels can help it regain its blue-chip status, according to Grobler.

“The company is reinventing itself,” he said.

Luck plays such a huge role when it comes to successful inventions that the probability of any business reinventing itself successfully is quite low.

Nokia was successful at making the transition from a lumber company to a cellphone company. They had a few spectacular years in the sun, but where is Nokia today? Think about Blackberry which went from hero to zero. Coca-Cola is one of the oldest listed companies, but that proves the point – they never had to reinvent themselves. It is still the same business with the same business model, although they did add a few new brands.

At this stage, green fuels cannot compete without subsidies, and subsidies depend on lobbying powers. The reinvention depends on the generosity of taxpayers.

Excellent, Sasol looking ahead, and moving on from its dirty Sasolburg and Secunda operations in the future.
Future mobility, transport will work on electricity, hydrogen and other environmentally friendly produced fuels.
The big question will indeed be how to bring the production price of hydrogen down, and it cannot only be by dirt-cheap green electricity, the whole process needs major improvements.