Sibanye: Thinking outside the box

Neal Froneman comes up with a win-win solution for stakeholders.
By Marylou Greig 18 Sep 2015  00:01 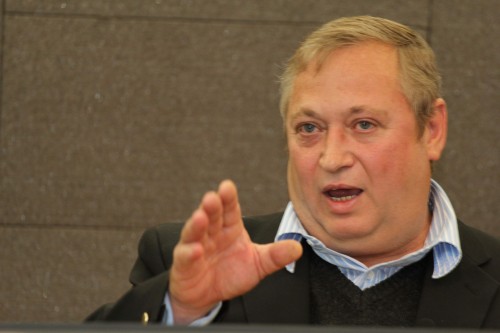 The call earlier this year by Mineral Resource Minister Ngoako Ramatlhodi for a home grown mining champion to step forward, clearly did not fall on deaf ears. Sibanye Gold, led by CEO Neal Froneman, has stepped into the spotlight demonstrating an ability to think outside the box when putting together deals that benefit all stakeholders in an embattled industry.

Following hot on the heels of last week’s announcement which marked the company’s foray into platinum, Sibanye now proposes to put in place a series of transactions that will see SA’s largest gold producer ultimately own a majority stake in an enlarged coal group.

Rewind to March this year. ASX and JSE-listed Waterberg Coal Company (WCC) and associate Firestone Energy (FSE) applied for voluntary suspensions. Firestone holds a 60% interest in the Limpopo-based Waterberg Coal JV project. Waterberg Coal owns a 45.88% stake in Firestone – controlling its activities and financing its capital expenditure. Faced with the repayment in April of the funding facility made available to it by the Standard Bank (SBSA), Waterberg Coal embarked on a plan to seek a third party to refinance the facility but met with little success.

Several months later in walks Sibanye, which for some time now had, as with most South Africans, expressed concern about the unreliable electricity supply from state-run Eskom. In February the company revealed that it would be exploring alternative sources of electricity supply and was contemplating a phased R3 billion investment, with involvement of financial partners, in establishing a solar photovoltaic generating plant. What the coal companies’ predicament did was to provide Sibanye with an opportunity on which to capitalise and reduce its dependence on Eskom.

Sibanye will acquire a secured convertible note in WCC from the consortium of lenders comprising SBSA and Abu Dhabi Investment Council for A$22.5 million, the terms of which have been amended to allow for conversion into equity in the enlarged company upon completion of a corporate restructure. The proposed restructure will see WCC and FSE merge through a proposed scheme of arrangement to form a single company.

In addition, Sibanye will inject a further A$8.5 million into WCG to fund further development of the Waterberg Coal Project (WCP) and will have the right to subscribe for such number of additional new shares in order for it to achieve a 51% stake in WCG within 18 months of closing the deal.

In line with Sibanye’s focus on securing a platform to facilitate the company’s electricity supply objectives, a coal off-take agreement has been signed with WCG to secure coal supplies for its proposed independent power producer project.

The WCP, in which Sekoko Resources participates, comprises three projects; mining high grade coal for export purposes, selling thermal quality coal to Eskom and an independent power producer platform (IPP) through which coal-fired power generation facilities will be developed. Sibanye sees the multi-product nature of the WCP as having the ability, in an economically viable manner, to produce energy from coal that would otherwise have been thought of as discard. It will enable Sibanye to secure a reliable energy supply while having greater control over energy costs, which in turn will support the company’s bottom line.

Again Froneman appears to have come up with a win-win solution for stakeholders across commodity industries.