Otis Tshabalala takes over the top position from December, but Ngebulana will stay on until May 2022 in a consulting role.
By Palesa Mofokeng 26 Oct 2021  10:47 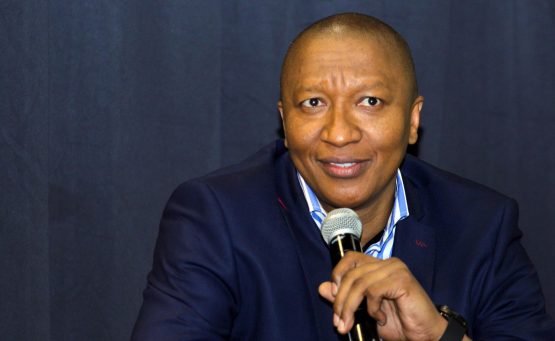 Founder and CEO of JSE-listed Rebosis Property Fund Sisa Ngebulana has decided to retire, the group announced on Monday.

“Following the announcement of the R6.3 billion sale of 32 office assets that will restructure Rebosis’ balance sheet to an acceptable loan-to-value (LTV) level of 42%, Dr Sisa Ngebulana has decided to step down and retire as CEO and from the board with effect from 01 December 2021,” it said in a Sens statement.

Rebosis pointed out that Ngebulana had planned the move when he took up the CEO role again back in 2018.

This was following the departure of former CEO Andile Mazwai, who had a short stint in the position but resigned after differences with Ngebulana and the Rebosis board. Ngebulana was CEO of the company when it listed on the JSE in 2011.

With Ngebulana now set to exit executive roles at Rebosis (he remains a shareholder in the company), the group also revealed that Otis Tshabalala will take over the top position from December.

Tshabalala is the outgoing chief operating officer (COO) of SA Corporate Real Estate. He is also a former COO of Delta Property Fund.

His appointment as CEO of Rebosis means that Tshabalala will effectively need to lead the finalisation of the group’s R6.3 billion sale of its government-tenanted office property portfolio to Ulricraft Proprietary Limited, which is a subsidiary of Vunani Capital Partners.

Ngebulana, who will stay on in a consulting role at Rebosis for a six-month period, is likely to work with Tshabalala to finalise the deal.

“In order to ensure a smooth handover to the incumbent CEO, Dr Ngebulana will consult to Rebosis until end May 2022,” the group noted in its Sens statement.

The group’s share price weakened just over 7% on Monday, to close at 26 cents a share, after the news of Ngebulana’s resignation and retirement.

His ‘retirement’ comes as somewhat of a surprise, considering Ngebulana is in his early 50s.

However, Ngebulana also owns the privately-run Billion Group, which developed the Baywest, Hemingways and Forest Hill City shopping centres that are now part of the Rebosis retail portfolio. Monday’s share price decline wiped out some of the gains following the announcement on Friday of its R6.3 billion office property portfolio sale. However, the stock was trading firmed at around 27 cents in early morning trade on Tuesday.

“The disposal of assets will bring down the company LTV level and optimise its balance sheet to real estate investment trust standards, closing the curtain for Ngebulana’s three-year stint since the board brought him to stabilise the company,” Rebosis said in a separate media statement.

“Rebosis was facing financial crises which included asset write downs of its United Kingdom assets, precipitated by Britain’s decision to leave the European Union [Brexit], that caused a storm in the financial markets and investments, including assets write-downs,” the group added.

“Notwithstanding its challenges, Rebosis continued to meet all its financial obligations and generated surplus cash in addition to successfully renewing debt facilities,” the company also noted in its Sens statement.

“The board further notes Dr Ngebulana assisting the company in successfully defending an aggressive takeover bid during this time by acquiring shares at a premium from the bidder to protect shareholder value,” it pointed out.

“In these changing environments, every company faces challenges. Rebosis was no exception,” Ngebulana declared in Monday’s media statement.

“It has been a privilege to lead this company during the past three years. Initially the board gave me a one-year timeline to stabilise the company when it was facing financial challenges… [But] more new challenges emerged as I started which included massive assets write downs as a result of Brexit uncertainty and local conditions,” he added.

“I focused the team on fundamentals and operational efficiencies, preserved cash resources through retaining dividends and restructuring debt through this period… As a result, the company met all its financial obligations and generated surplus cash with all debt facilities renewed each year,” reiterated Ngebulana.

Rebosis surges over 34% on news of possible rescue deal

“Following a long negotiating process, the sale of 32 office assets at R6.3 billion has now been signed, subject to fulfilling conditions thereto. Upon fulfilment of all conditions, shareholder voting and transfer of the properties, the company will have a debt of around R3 billion instead of R9.3 billion, thus reduce the LTV to 42%, in line with best practice,” he said.

Ngebulana said he has ‘no doubt’ Tshabalala will do well in the CEO role.

“Post the implementation of the disposal transaction, Rebosis should be in a position to resume paying distributions and under Otis’ leadership will pursue growth opportunities over time,” he said.

Nedbank and others must be relieved.

Otis Tshabalala, the same guy who resigned from Delta with immediate effect when senior management was accused of corruption by the board. I guess its ‘innocent until proven guilty’. Clearly his departure from Delta and the collapse of the share price has not dented his corporate image.