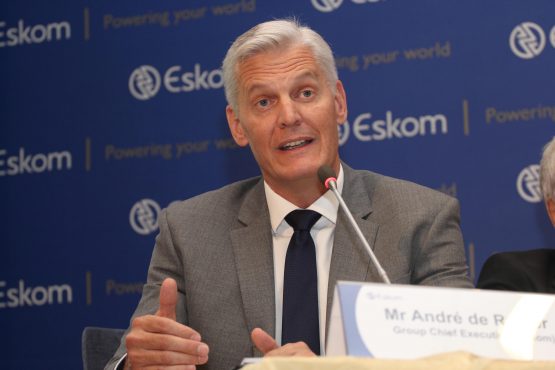 In an update on Wednesday afternoon, Eskom said loadshedding would proceed from Stage 4 to Stage 3 as of 22:00 on Wednesday night, continuing at that level until Friday. This follows six generation units being returned to service over the past 24 hours, and three more units set to return on Thursday.

According to the state-owned enterprise, 5 787MW is on planned maintenance, and another 14 259MW of capacity “is unavailable due to unplanned breakdowns.”

Earlier in the day Eskom CEO André de Ruyter had said: “We are expecting a number of large units to return during the course of tomorrow and if those units stay online and if they perform as expected, then we should be able to consider lifting load shedding entirely by the start of the weekend.”

As of Wednesday morning, Eskom had lost a unit at Majuba power station due to a boiler tube leak, as well as another unit at Arnot power station which tripped.

The utility saw a return to service of two units at Lethabo power station while Camden also saw a unit return, as did Matla power station.

“The units are coming back, we are again putting in every effort that we can, to reduce load shedding as soon as we can.”

“Again, we wish to issue an apology to the country for the load shedding that we unavoidably have to impose in order to prevent the much greater inconvenience and risk of a total system blackout,” De Ruyter says.

Total blackout not a risk

Eskom says despite the latest intensification of power cuts in the country, a total system blackout remains off the cards.

According to De Ruyter, Eskom’s assessment is that its systems still have enough headroom to avoid a total blackout.

Earlier Eskom’s chief executive for transmission Segomoco Scheepers had said: “As we speak with Stage 4, we are reasonably comfortable that the system is in balance, the recovery plans have been spoken about in terms of the units that are coming back online.”

“Therefore, we are not particularly concerned about this risk, but it’s something that is always top of mind for the system operator to make sure that every second they are doing what is necessary to maintain balance in the system.”

So focused on the day to day that there is no planning ongoing for the future.
No new construction started in the last 5 years!!!!
That simply means that we run everything into the ground and then blame apartheid !!!!!

The handful of wokes also get in on the act trying to stop the R4billion rand Amazon development in Observatory Cape Town which would inject thousands of jobs into the economy.

You can’t make this sort of stuff up!

There are very few building block in a functional society of greater importance that a sustainable, trustworthy power supply. It is paramount in enforcing the contribution industry provides to a country. The damage done by a never ending procession of inept and incompetent CEO’s through the last 15 years will in the future be high lighted as the ANC’s most destructive policy of deployment.

“Luthuli House has tripped. We are forced to impliment goverment-shedding. We will only be able to generate stupid ANC incompetence for 1 day per week from now on. The cost of corruption, BEE and state capture will be carried by the govermment employees and will be limited to the value of the GEPF. Please generate your own set of rules and principles as you cannot rely on this stupid and criminal government anymore.

We will restore ANC corruption and stupidity to its full potential as soon as Luthuli House comes back online again. Until then, please bare with us and enjoy your life in a civilized world.”

This scenario is actually feasible and it is in the hands of voters.

I don’t think you can really belive anything they say. Only they know how bad it really is and they not going to let the public really know,

It is bad make no mistake. De Ruyter – good though he may be – is not going undo 20 odd years of mismanagement etc. in a couple of years & not while his hands may be tied by “certain” regulations!