Standard Bank did well to weather the storm of low economic growth and weak consumer confidence in SA during the first half of the year – by growing its corporate and investment banking business and expanding its operations into African countries north of SA’s borders. Strong results from the corporate and African segments were the main drivers for the 6% increase in headline earnings to nearly R13.4 billion in the six months to June.

Headline earnings per share showed a similar 6% increase to R8.29 for the six months and the interim dividend was also upped by 6% to R4.54 per share.

Management noted that the operating environment in SA remained weak with uncertainty weighing on confidence, spending and investment, leading to very low economic growth. This, in turn, resulted in low demand for new loans and thus fewer opportunities to earn income.

Standard Bank discloses that advances to retail and business customers increased by only 5% in the six months to June compared to the first half of 2018. Luckily, Standard Bank was able to grow its corporate and investment banking business aggressively and the value of loans to big businesses, governments and those linked to corporate deal-making increased by 14% compared to a year ago.

Arno Daehnke, financial director of the Standard Bank Group, told analysts and investors in a presentation of the results that banking clients have been migrating to low-cost online and digital banking services with the result that revenue from traditional banking fees were decreasing, while fees from electronic banking are increasing.

Private and business banking in SA delivered headline earnings of R6.1 billion in the first half of the financial year, which was largely unchanged from a year ago. This reflected the impact of the cost of reducing the number of branches and the continued difficult macroeconomic environment.

The results disclosed that Standard Bank reduced its branch network to 531 branches by closing another 98 offices and reducing the overall floor space by some 14% compared to six months ago.

“Standard Bank had to adapt to changes,” says Daehnke. “We evolved into a fitter and better enterprise.”

The bank continued to keep cost increases as low as possible, with total operating costs increasing by only 6% compared to a year ago. The cost-to-income ratio decreased to 57% (57.6% in the six months to June 2018).

Of interest is the strong growth in business in the rest of Africa. Loans to customers in countries like Namibia, Nigeria, Angola, Malawi and Mozambique increased by 17% to R70 billion, mainly due to higher loans to businesses.

Corporate and investment banking also increased sharply in the rest of Africa, with Daehnke highlighting the success the bank achieved in bringing together governments, funders and corporate entities to strike deals ranging from currency transactions to development and funding of large infrastructural projects.

While Standard Bank still earns the bulk of its income in SA, the contribution from the rest of Africa is increasingly important as the margins are much higher than in SA. The interim results show that the return on equity for the African segment is sitting at 22% compared to 15% for Standard Bank SA.

CEO Sim Tshabalala confirms that Standard Bank is looking for continued growth from Africa. “We continue to see fast growth in retail numbers in our African business which countered lower growth in SA.”

Tshabalala struck a positive note in the presentation to investors, saying there are very encouraging signs that things are improving.

“We expect some improvement in the second half, although confidence in SA remains subdued.”

He expects some structural reforms in SA to bolster economic growth, including steps to stabilise state-owned enterprises. “It will definitely happen,” he says, but adds that he does not have confidence that we will see much change in the labour market or reform in education.

Standard Bank hopes to benefit from continued growth in other African countries with recovery in Nigeria and Angola leading the pack. Meanwhile, the reduction of cost growth and increases in efficiency remain a priority, says Tshabalala, to “permanently reshape the group’s cost structure”.

It looks like investors welcomed Standard Bank’s results – the share price increased 0.7% on Wednesay (August 7) against the backdrop of a 2% decline in the banking index. However, at just above R172, the share is still 20% off its 12-month best of R210 and seems to be stuck in a downward trend, like the share prices of SA’s other banks. 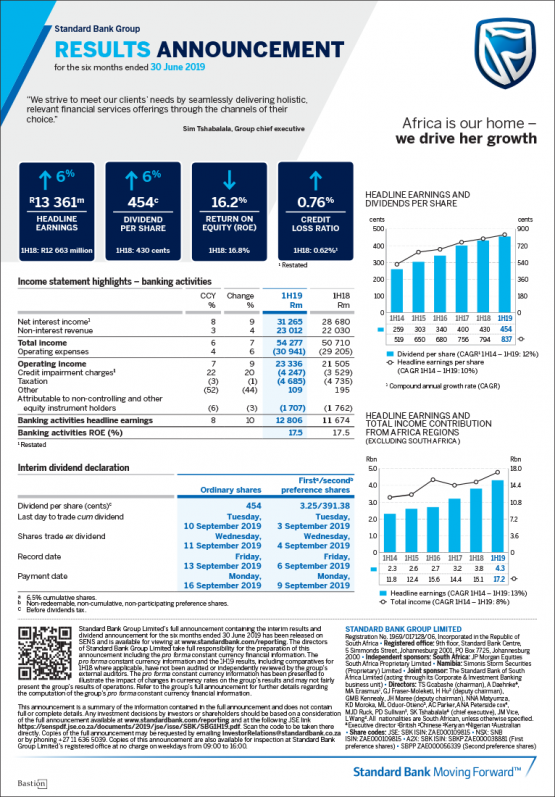 Brought to you by Standard Bank.

I’m impressed by SB’s performance in what must be a difficult market. Pleased to see that management is moderately optimistic about SA’s prospects for the rest of the year. Very pleased to see the degree of success in assisting companies in other African countries. Well done SB!