Standard Bank shareholders defy board in vote for greener disclosure 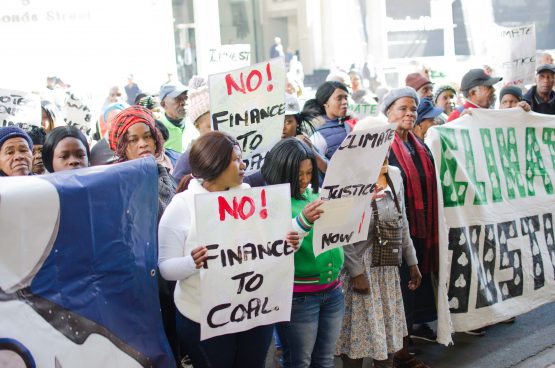 Protesters gathered outside Standard Bank’s head office on Thursday calling for shareholders to vote for the resolution, and delivering a message to the entire business sector – get your environmental ducks in a row or it’s going to get noisy. Image: Moneyweb

This is almost certainly the future of annual general meetings (AGMs) in SA. Get your environmental ducks in a row or it is going to get noisy.

Protesters were gathered outside Standard Bank’s Simmons Street head office on Thursday calling for shareholders attending the AGM inside to vote for a resolution compelling the bank to adopt and disclose a policy on lending to coal projects. Non-governmental organisation Just Share says this is the first time that a South African bank, or any listed company, has faced a shareholder resolution on climate change.

The resolution was proposed by the Raith Foundation and shareholder activist Theo Botha, and supported by Just Share. When asked by Tracey Davies, director of Just Share, why the bank recommended voting against the resolution, CEO Sim Tshabalala said the bank fully supported the Paris Agreement on climate change, and agreed that climate change represented a “clear and present danger”. The bank was embarking on a process of adjusting to the requirements of climate change as it affects its activities, he said, but was compelled to balance this against developmental objectives.

Environmental activist Greer Blizzard of Just Share pointed out that Standard Bank is one of the lead arrangers for a US$2.5 billion loan to support the East Africa Crude Oil Pipeline through Uganda and Tanzania, which the bank claims will unlock East Africa’s potential. However, the oil to be transported through this pipeline will emit more carbon than the whole of Uganda and Tanzania currently does each year.

Thousands of people will be displaced, and the pipeline will run for several hundred kilometres though the Lake Victoria Basin, putting the drinking water of millions at risk.

A coalition of African and international environmental activists recently wrote to the bank urging it not to proceed with financing the project. They point to several studies showing major opportunities for financing renewable energy infrastructure which would meet the region’s energy needs in a clean and rights-compatible manner, which would represent a much less destructive use of the bank’s finances.

“Will the bank agree to meet with local people and listen to their concerns about the East Africa Crude Oil Pipeline?” asked Greer.

CEO agrees to meet with locals

Tshabalala said he would, adding that the bank supported the Task Force on Climate-related Financial Disclosures (TCFD), joining more than 500 organisations around the world committed to improving climate-related disclosures.

The TCFD’s mission is to “develop voluntary, consistent climate-related financial risk disclosures for use by companies in providing information to investors, lenders, insurers, and other stakeholders.”

Some 55% of shareholders voted in favour of the bank adopting and disclosing a policy on lending to coal-fired power plants and coal mines.

“This was a significant result,” said Davies after the vote. “Firstly, for a majority of shareholders to vote in favour of the resolution despite [the] board recommending against it really shows that there is much more awareness and understanding of climate risk among our investment industry than it might appear.”

A second part to the climate-related resolution would have required the bank to report to shareholders its assessment of the greenhouse gas emissions resulting from its financing portfolio and its exposure to climate change risk in its lending, investing and financing activities. This resolution was defeated, but still managed to swing 38% of shareholders to vote in its favour.

Davies says this was an impressive vote in favour of climate-related disclosures, considering this was the first time it had been tabled. “Generally it takes several years to raise awareness behind climate-related disclosures among shareholders, and this is a far better result than has been obtained in other AGMs around the world when such resolutions were first introduced.

“It is clear we are moving rapidly in the right direction.”

“In SA, where we are still so heavily reliant on fossil fuels for energy, climate risk and the transition to a low-carbon economy pose unprecedented risks and opportunities for our society and economy. The financial sector has a crucial role to play in driving this transition and today’s developments prove that institutional investors are starting to demand it do so.

“Banks should already, at the very least, be disclosing the extent to which they are exposing their businesses, shareholders, and the planet to climate risk via their financing of fossil fuels.”

Shareholder resolutions have become one of the most powerful tools for raising awareness about climate change risk, and for forcing the business and financial sectors to take action to mitigate and avoid that risk, says Just Share.

But do it without protection. So sure, build a pipeline. Frack the Karoo. As long as you have sufficient proof of insurance for unlimited liability for environmental disasters, with recourse to shareholders for bankers, construction companies, clients and the operator. Recourse means no hiding behind limited liability : if BP Tanzania is the pipe partner then BP group is unlimited exposed to risk just like it has unlimited exposure to reward.

Oops : the cost of such insurance means the investment feasibility has wobbled?

Suddenly not so eager on naked capitalism?

My goodness. Here’s an article everyone should read.

It is, I promise, worse than you think. If your anxiety about global warming is dominated by fears of sea-level rise, you are barely scratching the surface of what terrors are possible, even within the lifetime of a teenager today.

Sadly, it may be much too late to save our climate; and weaning ourselves off fossil fuels would also kill billions of people – they really have no substitutes.

Still, since we continue to destroy the planet for profit, the actions of these profiteers are far worse than the cigarette companies of yesteryear who only destroyed the health of millions.

I’m impressed. Watch this movement grow. Very soon it will be the loudest voice on the planet.

But sadly, what we are going to do (like this act of just disclosing loans) is also going be far too little, too late.

This is an action that would have had proper meaning in the 1940’s. We’re long past that now.

I read the article, Navigator, and it is scary. Even more scary is our tendency to believe that things will ‘continue just as they are’. So we’ll continue to live in self-comforting denial until the pawpaw hits the fan. And it will happen in inconceivable ways we just don’t want to even think about.
Round about now it might also be a good idea to look at some Biblical prophecies, which totally corroborate what the article is saying. E.g. ‘NATION WILL RISE AGAINST NATION and kingdom against kingdom. There will be great EARTHQUAKES in various places (My comment – these are already increasing and California is well overdue for one.), FAMINES and PESTILENCES’ (i.e. diseases). Luke 21:10 & 11, Christ speaking. Then later in the same chapter: ‘There will be signs in sun and moon and stars and on the earth DISTRESS OF NATIONS in perplexity because of the roaring of the SEA AND WAVES, (My comment – rising sea levels), people fainting with fear and with foreboding of what is coming on the world’.
But of course, the scoffers will continue to scoff, as they already scoff at predictions of science. Bad news is just so unpalatable, it messes with our financial plans. We simply want to continue being ostriches, heads in the sand with our bums in the air awaiting an almighty kick.

@ Navigator – From that article I don’t get the sense there is real understanding, or answers, only the imagination and fear of the writer. Its almost like an artists impression of a dinosaur, or distant planet millions of light years away…. no one can prove them wrong – but – that does not make them right. Are these the same “scientists” trying to convince us all we came from soup, or a rock, 4.5 billion years ago? They are serious, but seriously?

Well I reckon we just have to sit back and watch the weather over the next year or two. That’s about all it’s going to take for the penny to drop. That’s if the fact like 18 of the 19 hottest recorded years are all in this century is not enough for you.

Doesn’t take much to answer that.

Sorry but this picture is weirdly unbelievable…not one white face protesting? Something wrong here.

I thought the banks already stopped funding for coal burning power plants? So disclosure will force them to honour this policy?

Stupid and shortsighted… climate change is a very harsh reality and it is already impacting millions if not billions of people around the world.

Witness the current chaos in the Midwest of the US (ironically mostly supporters of Trump, who still refuses to acknowledge that climate change is real).

Misleading picture too – not a white face in the crowd. I find this picture disturbing because it’s so unrealistic that the protestors shown would be protesting over this issue. Certainly staged in my opinion.

Agree and in reality most of those protesters do not pay for electricity in any case. So it looks a bit contrived to say the least.

I’m fairly certain Standard Bank signed the equator agreement which should have a fairly rigorous environmental assessment for any capex project.

I don’t have anything strictly against coal investment or the like but if it a high emission or project which will lead to large environmental problems then why would std bank even consider funding it. If 40% of your shareholders aren’t happy with then you should surely be listening.

Hasn’t Standard Bank ALREADY said NO to dirty technology such as coal projects? If not, it’s ABOUT TIME (including Eskom!)

And that should INCLUDE bridging finance.