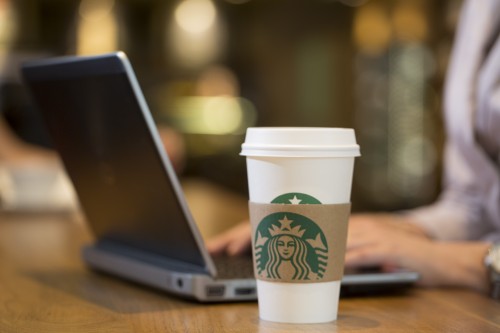 LONDON – The Seattle coffee chain is growing strongly in all regions, with profit up 22 percent in its third quarter. But for Starbucks, the choice between Africa and China is clear – the People’s Republic is its fastest-growing overseas market.

Recently announced plans to open its first sub-Saharan outlet in Johannesburg look much more conservative.
Starbucks coffee has been a surprising hit with traditionally tea-loving China. The company has a bullish target to more than double its store count in the country to 3,400 by fiscal 2019.

In South Africa, it has just signed a 25-year exclusive partnership with local player Taste Holdings. Starbucks could do with more geographic diversification. The Americas brought in 73% of group revenue in 2014. And South Africa already has a vibrant cafe society, along with the best infrastructure and retail network on the continent.

Posh cappuccinos should go down well with the country’s growing middle class too, around 15 million households, Standard Bank data shows. But this is not yet a fully froth-friendly market. The economy is hamstrung by severe electricity shortages and the IMF forecasts a lacklustre 2% GDP growth in 2015.

Still, interest from multinationals is strong. Taste Holdings also holds the licence to roll out Domino’s Pizza, and U.S. doughnut chain Krispy Kreme will open 31 new stores in South Africa by 2020, also working with a local partner. Then there is the notion that the nation can be a springboard into the rest of Africa.

However, it will be a while before most of the continent can afford the “Starbucks experience”. Across 11 sub-Saharan countries analysed by Standard Bank, 86% of households have an annual income below $5,500. That doesn’t leave much financial wiggle room for $4 coffees. The pace of upward mobility looks modest. In 2030, Standard expects 75% of households to still be living on $15 a day.

Eventually, strong economic growth should generate Starbucks-sized markets around the continent and the infrastructure needed to provide uniform quality. U.S. President Barack Obama, currently on an official visit toAfrica, has said the region has the potential to be the next centre of global economic growth. But Nairobi is notBeijing. With the exception of South Africa, it’s too early to stick the kettle on.

I totally disagree. SBUX will be a huge hit in SA.
-South Africans crave US branded product. Burger King, Domino’s et al
-Most cant afford a Merc and a big house and overseas holidays but will buy a simple luxury like a premium coffee.
-Its a lifestyle, not just a cup of coffee. It has aspirational qualities.
-They will lining up wherever they open which will likely be in affluent areas for the foreseeable future.
-They are different in that people will start drinking coffee differently as they will be able to get it in a branded cup that they can take to the office or friends or in the car.
-They will buy the instant and the beans to use at home.

Taste have done a GREAT deal. At 470c is a call option on a huge annuity type business.

I agree, it will add value for Taste.