Markus Jooste is arguing that payments made to him were not ‘express terms’ of his employment contract.
By Janice Kew, Bloomberg  19 Aug 2019  08:30 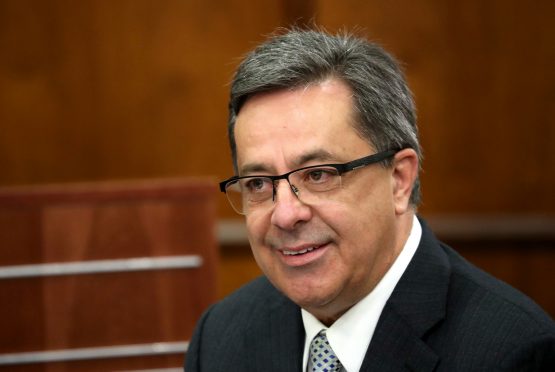 Steinhoff International former chief executive officer Markus Jooste sees the retailer’s claim for more than R850 million against him as “vague and embarrassing.”

The owner of Poundland in the UK and Pep stores throughout Africa said in June it will look to claw back base salaries, bonuses and other incentives paid to Jooste since 2009 because of his role in the accounting crisis that triggered the retailer’s near-collapse.

Read: Steinhoff’s ‘only way to survive’: slim down, sell assets

Jooste’s planned exception to Steinhoff’s claim includes the assertion that the company failed to provide enough detail of his employment contract in the lawsuit, including whether certain elements were made orally or in writing, according to legal papers filed to the High Court in Cape Town. The filing gives Steinhoff two weeks to “remove the identified causes of complaint”.

Steinhoff’s shares have collapsed by 97% since the crisis erupted in late 2017 and the company is itself facing a string of lawsuits, which chief executive officer Louis du Preez on Tuesday said the company would prefer to settle as quickly as possible.

Steinhoff has claimed that payments to Jooste were dependent on “the sound and successful financial performance” of the retailer and, had the company been aware of all the facts, the remuneration committee would not have recommended any payment.

Jooste is arguing that these were not “express terms” of his employment contract. Moreover, he’s objected to Steinhoff not explaining how any fictitious deals or accounting irregularities resulted in a loss to the company, rather than its shareholders.

In at least one lawsuit against the company, where Steinhoff added Jooste as a third party, the ex-CEO has argued that he needs access to a full forensic report compiled by PwC. Steinhoff, who commissioned the report, has refused, according to separate court papers. Du Preez said Tuesday that the report needs to be kept confidential for Steinhoff’s own legal cases.

Late Tuesday, Steinhoff got some space to focus on the lawsuits as it reached an agreement with creditors where it doesn’t have to pay principal and interest on about 9 billion euros ($10 billion) of debt until December 2021.

And he is walking the streets why?

If what Jooste claims is true (expressed terms of his employment contract) then how Was he paid in the 1st place? FRAUDULANTLTY ?

Jooste, by his own admissions in public, stated, “I am not a diligence person”….. proof of such is by the way he did deals, i.e.. Tekkie Town (on a napkin), then Jooste admits to wrong doing.

PAY BACK THE MONEY, JOOSTE and GO TO JAIL

Secondly, Steinhoff is incorrect to claim “privileged protection” re the PWC Report. The PWC Report belongs to ALL shareholders. Why has no shareholders taken Steinhoff to court on this point? What is Steinhoff hiding …… current execs implicated ?

I still don’t understand why nobody is in jail for this yet…
Welcome to modern day economics, doesn’t matter if you push capitalism or socialism, if you’re rich you can do whatever you please with no consequences.

My Brother, I sat on the trading floor at the Refco Building 550 W. Jackson Blvd, Chicago, when on October 12, 2005, The CEO Phill Bennett was arrested and charged with securities fraud. This was 2 days after the scandal broke.

I sat on the trading floor, along with hundreds of traders, watching on Bloomberg Channel how the police escorted the handcuffed Bennet out of the very same building we were sitting in. This is a better example of the law and order that is part of the capitalist system.

The deterioration of the rule of law that we experience in South Africa is so typical of the decay of law and order under a socialist regime. The criminal justice system is the first casualty of the perversion of the law that is socialism.

There are two issues here: 1. The law needs to be seen to be done. It’s not happening in the RSA.Witness Porritt and the Zuma gang. I have long said the perp walk serves a purpose. No question in my mind 2. The rich can get away with anything. Jooste is never going to go to jail he is going to keep this going for the next 20 years … and he has the money to do it. There are two systems of justice in SA….one for the rich and the politicians and one for the rest of us. Most of the facts pertaining to malfeasance at Steinhoff are outlined in “Steinheist”. Surely this man should be locked up pending trial..? Is there a lawyer out there who can explain this to us ordinary folks?

The only thing that’s “embarrassing” about this case is the man’s total lack of shame.

Mr Marcus Jooste, I have no words for you . Remember what you do unto others will come back to you. You have destroyed my life.

Mr Marcus Jooste, I have no words for you . Remember what you do unto others will come back to you. You have destroyed my life.

I started to question the honesty of Steinhoff’s directors a couple of years ago when Wiese had his suitcase with 500 000 pounds in cash confiscated at Heathrow while being booked on a flight to Paris.

At least a common lowlife has a face now.

The public perception of him is at the lowest anyway so he does not care as that cannot get any worse and he may as well try keep all his ill gotten gains at any cost which will involve all these type of tactics.

I used to wake up in a sweat at 2 in the morning worrying about my little overdraft……I some how think you do not, seeing that I have not crossed into the dark side. Those that cross that line seem to like it there.

Beware boet you may be rich and never go to jail but one day you will feel a little discomfort in the rear end………..it will bite you.