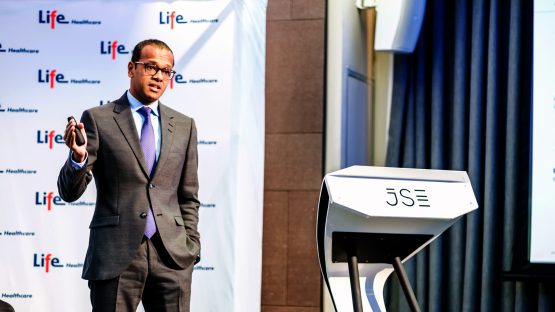 Group chief executive Shrey Viranna says within South Africa there was an improvement in positive paid patient days, with growth of 1.1 % despite a tougher environment and a reduction in admissions for pneumonia-related conditions in the last quarter of the year. An additional 131 beds were added across South African facilities. The newly-acquired Life Healthcare Employee Solutions, which offers occupational health and wellness programmes, lost a major contract in the first half of 2018 but management is confident that the business is well-positioned for new growth with improved margins.

“We continue to invest ahead of the curve with areas of growth both in South Africa and internationally, with operations in Italy, Ireland, Poland and the UK,” Viranna says.

He says Alliance Medical remains at the heart of the group’s investment story, with revenue for this division alone increasing by 30.8% to R5 billion. “This is due to the continued strong growth in molecular imaging in the UK, good growth in Italy and Ireland, the acquisitions of the Italian clinics, Imed and Centro Alfa, as well as Piramal Imaging SA, the inclusion of their results for the full 12 months in 2018 as opposed to just over 10 months inclusion in 2017, and the weakening of the rand against pound sterling and the euro,” he explains.

Viranna says Alliance Medical has done “unbelievably well in a challenging environment” with its first integrated diagnostic centre (IDC) opening in March this year and contracts signed with an additional 12 trusts. “The IDC is less about having a big structure and more about delivering volumes via service level agreements,” he says.

In Italy, private clinics’ MRI and CT (computed tomography) volumes increased 14% on the back of increased volumes and the acquisitions of:

* Albaro Clinic, which was acquired in 2017 and is performing ahead of business plan;

* Imed, which was acquired in March 2018 for £32.7 million and operates a group of six diagnostic clinics in the Veneto region in Italy; and

* Centro Alfa, which was acquired in September 2018 for £0.8 million and operates out of Modena in Italy.

In Ireland, Life Healthcare is rolling out an outpatient diagnostic clinic model, which is similar to the Italy clinic model and is part of a partnership with one of the large private hospital groups in Ireland. Viranna says there is currently a ‘pause button’ on other activity in Ireland pending certainty regarding a Brexit “We feel it is prudent to wait for three to six months until we can determine the impact of a hard Brexit,” he says.

Expansion in Poland, however, has not been confined to a clinic model and encompasses a larger footprint with two hospitals, 30 clinics, and more than 3 000 staff members.

Shareholders saw an increase of 11.1% in the final dividend, moving to 50 cents per share.