Extension welcomed, however government opts for a ‘step down’ approach – with the concession being reduced to 75c/l from July 6 and ending as of August 3.
By Roy Cokayne 1 Jun 2022  11:57 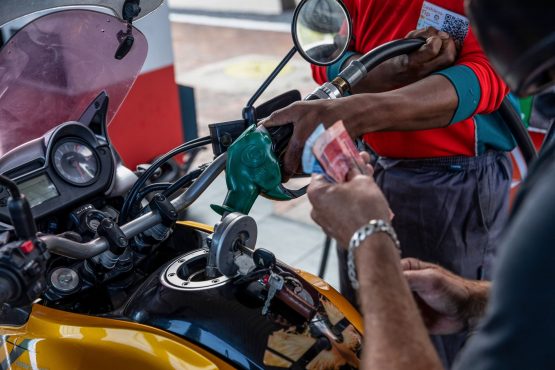 An attendant refuels a motorcycle at a fuel station in Cape Town. Image: Dwayne Senior/Bloomberg

Government’s temporary fuel levy relief measure will be withdrawn when the August fuel price adjustment is made, National Treasury and the Department of Mineral Resources and Energy (DMRE) confirmed on Tuesday.

Nonetheless, the announcement that the R1.50/l fuel levy concession will be extended for a further month, until July 5, has been largely welcomed.

The decision came as National Treasury looks to continue to soften the impact of massively higher fuel prices on consumers and the economy in the wake of the Russia-Ukraine conflict contributing to spiraling international oil prices.

With the volatility in global crude oil prices, the SA government is now also opting for a ‘step down’ approach in its fuel levy support measure. It plans to reduce the levy relief to 75c/l from July 6 and to end the support as of August 3 this year.

However, Finance Minister Enoch Godongwana and DMRE Minister Gwede Mantashe on Tuesday also indicated that government will be taking further measures to help reduce fuel prices in a more sustainable manner in the future.

Firmer details are expected when Godongwana tables his medium-term budget in October.

Several industry bodies and economists were happy about government’s extension of the fuel levy relief, including the Automobile Association (AA) and the Organisation Undoing Tax Abuse (Outa).

Chief economist at Econometrix Azar Jammine said the government was under a lot of pressure “to do something and it was between a rock and a hard place” on extending the relief.

“The country imports crude oil and the price of oil has risen sharply… Therefore the country, if it is going to and needs to import oil, is likely to have to do so now at a very high cost.”

Jammine stressed that there would have been a cost of some sort whichever way the government handled the situation, whether it was through doing away with the fuel levy or subsidising it.

“Whichever way you look at it, the consumer is still going to pay a lot more, but not quite as much as they were going to pay [for June and July].”

“One can only hope that oil prices fall back within the next two months, otherwise there will still be very big increases to come,” he said.

Jammine noted that the increase to the fuel price is part of the inflationary process taking place related to a shortage of fossil fuels. This, he said, started before the Russia-Ukraine conflict, however the situation “has been exacerbated” by the war.

AA spokesperson Layton Beard said the extension of the temporary fuel relief is welcome and will ease financial pressure on embattled consumers. However, he conceded that the June fuel price increases will “still hurt”.

Beard said the June fuel adjustments will take the fuel price to record highs, and consumers will have no option but to tighten their belts to accommodate these significant price jumps.

“Such a review is long overdue and the longer government delays in getting this started, the longer it will take to find sustainable solutions,” it said.

Outa CEO Wayne Duvenage said the initial announcement and the further extension to ease the pain of higher fuel prices “are unprecedented”.

“These are good things and we have to welcome it. It is a sign of a finance minister who understands and is showing sensitivity to the plight of the population and consumers and the ramifications of fuel price increases on inflation,” Duvenage said.

He added that this is also “a good crisis” to induce Godongwana to turn to his colleagues in government and “start forcing savings and tightening the belt”.

“We can’t continuously expect the taxpayer to fork out in these times. We have to look internally for greater efficiencies, less waste or good spending… No notions of flagpoles and nonsense like that … think with a citizen-centric hat on and maybe longer-term savings can come out of this difficult time,” he said.

Duvenage believes the levies in the fuel price have been “over inflated” for a long time.

Meanwhile, Consult by Momentum’s Larry Masson has warned of the ripple effect of the fuel price hikes.

“It is not only filling up that will cost us. The cost of petrol is directly linked to the cost of many other goods, such as foods and public transport – so there will be steep rises here too,” he said on Wednesday.

“South Africans are already under extreme financial pressure, and these significant increases will see them having to once again tap into their limited disposable income to make ends meet.”