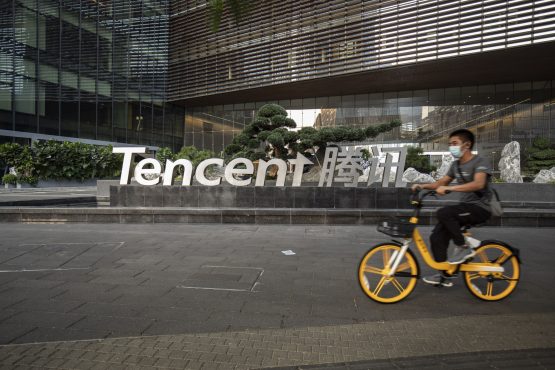 That the Tencent share price is back at pre-pandemic levels is interesting in that its approach to HK$356 has come from the opposite direction.

Most companies report that activity and earnings have recovered from pandemic lows and investors see a recovery in share prices – but Tencent fell hard after the initial boost it got from the new trend of working and playing from home.

Tencent ran hard from around HK$320 at the end of 2019 to a high of HK$757 in February 2021 as restrictions on the movement of people fuelled internet use and, more importantly, investor expectations.

The gradual return to normal since then, as well as other challenges, has seen Tencent slump by more than 50%.

Tencent dropped nearly 10% in just the last few days, with the decline starting shortly before the Chinese internet giant announced a mediocre increase of 8% in revenue for the last quarter.

Read: Tencent declares ‘reckless’ era for tech is over as growth tanks

The quarterly results were eagerly awaited, but the numbers seem to have disappointed, despite being close to analysts’ expectations.

Ever-critical analysts quickly pointed out that revenue grew at the slowest rate since the group listed in 2004, blaming the damage on the crackdown of Chinese authorities on large tech companies’ operations.

For Tencent, one of the serious restrictions is that authorities forced the company to limit the time kids can spend playing online games. This is a serious issue if one remembers that Tencent attributed its strong revenue growth a few years ago to the fact that it produced eight of the 10 most popular online games.

The Chinese government, by way of different regulatory departments and different laws, decided that it would rather not see its youth sitting in front of cellphone and computer screens for hours on end. In addition to limiting gaming time, authorities also prohibited the launch of new games.

Bloomberg reported that a “freeze in new releases in the world’s largest gaming market is entering its eighth month, reviving fear of a 2018 crackdown that plunged Tencent’s most lucrative business into contraction”.

During the quarter to end-December 2021, Tencent’s revenue from gaming operations in China increased by only 1%.

Another bombshell hit a few weeks ago when authorities accused some of Tencent’s underlying businesses of facilitating illicit financial transactions. This gave rise to speculation that Tencent might face a record fine.

While the weakness in the prices of Naspers and Prosus dragged down JSE indices last week, gains in the share prices of other large companies reduced the damage.

This index is based on the largest companies by market capitalisation and weighted by the free float of shares available to investors, however, it is regarded as giving a good indication of the overall sentiment in the market as it represents more than 80% of the total market value of companies listed on the JSE.

That said, large international companies hold supreme, with Prosus and Naspers having a big impact on the index due to their large free float of shares.

Other large companies – such as Anglo American, Richemont, Sasol, British American Tobacco, AB InBev, BHP Group, MTN and local financial giants – mostly held on to their recent gains during last week, except for the effect of the stronger rand on some of the share prices and the concern of the effect of rising interest rates on consumer spending, company earnings and share valuations.

While the recent increase of another 25 basis points in the repo rate was expected, the news that two of the five members of the South African Reserve Bank’s monetary policy committee voted for a 50 point increase shows that interest rates are on a definite upward trend.

“As such, the possibility of a more aggressive hike, 50 basis points instead of 25 basis points, at one or more of the remaining meetings cannot be ruled out,” she adds, although saying that this is not the bank’s most likely scenario.

Overall, the JSE Top 40 is back to just about where it started 2022, after advancing 5% during the first few months of the year, predicting that investors are in for interesting times in 2022 – the type of interesting times referred to in the Chinese proverb.

Naspers and the JSE Top 40 over the past five years