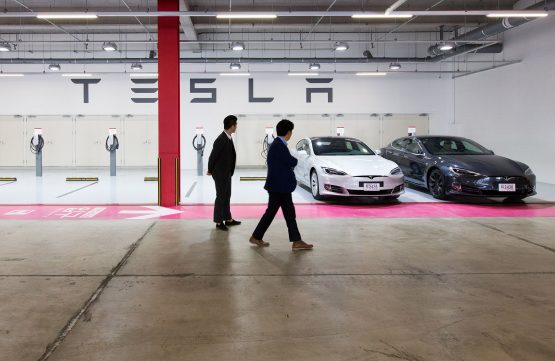 Tesla shares are poised to mark the biggest seven-day gain since 2013, after Credit Suisse upgraded the electric-car company on Tuesday, saying the coronavirus crisis has handed it an edge over legacy automakers.

Shares of the Model 3 maker rose as much as 14% in New York on Tuesday, putting them on track for a nearly 60% climb in the course of its longest win streak since mid October.

“With the focus almost exclusively on the ‘near’ for the auto industry, and combined with reduced liquidity/increased net debt levels, it raises question on how legacy players can maintain ample commitment to the ‘far’ (specifically, electrification),” Credit Suisse analyst Dan Levy wrote in a report. Tesla, on the other hand, “is solely focused on electrification and doesn’t have the dilemma of balancing a transition from ICE (internal combustion engine) to EV.” Levy bumped his rating up to the equivalent of a hold. Coronavirus-related market gyrations led Tesla shares to drop as much as a 61% from a record high on February 19. The stock has been steadily advancing since the company reported better-than-expected first-quarter deliveries on April 2 and is back to the levels it was trading at in early March.

“There is some clear optimism from the bulls,” Wedbush analyst Dan Ives wrote to clients on Monday. China production and demand appear poised for a significant rebound and should be a key growth driver over the coming quarter, he said.

Even so, it is now a “virtual impossibility” that Tesla will be able to reach its original annual delivery forecast of at least 500 000 units, according to Ives. Bullish investors are also looking past the shutdown of the company’s vehicle assembly plant in Fremont, California, which could last at least another month, further complicating the delivery trajectory for the coming quarters, he said.

Credit Suisse’s Levy also sees Tesla coming up short of its full-year deliveries guidance and is now estimating the company will hand over about 400 000 electric vehicles to customers this year, down from his previous projection for 550 000.

While Levy estimates Tesla is burning about $300 million of cash every week that its Fremont factory is down, he believes the company will emerge from the crisis with advantages over other automakers.

“It likely has a lead in batteries, its liquidity is improved and it has shown signs of improvements in basic auto execution,” Levy said.

However, the group continues to maintain a strong balance sheet boosted by improved performance by its Boxer and clothing stores.