The year of The Struggle

A year after its unbundling and the Steinhoff implosion, Pepkor is finding its feet.
By Sasha Planting 27 Nov 2018  00:09

The 2017/2018 year is one that the management of Pepkor would rather forget.

Chairman Jayendra Naidoo refers to it as The Year of the Struggle. A year filled with crises and drama and requiring extraordinary resilience from board members and management alike.

The year saw Steinhoff, which holds 71% of Pepkor, implode spectacularly shortly after Pepkor was unbundled from Steinhoff and listed on the JSE, causing a chain reaction that threatened the very foundations of the value retailer. The year has been spent fighting fires, the biggest of which was refinancing R16 billion worth of Steinhoff shareholder funding that then released it from related financial guarantees, and the most ‘irritating’ of which is the ongoing low-grade war between Pepkor and the founders of Tekkie Town. This culminated in the walkout of about 100 of Tekkie Town’s most senior staff.

Tekkie Town sales before and after staff walked out Yet with all of these challenges and more, Pepkor CEO Leon Lourens says that deflation stands out as the most testing of the problems faced in the past year.

“Deflation is very difficult for a retailer to manage,” he told investors at the presentation of the company’s results on Monday. “We passed the lower costs on to consumers, which means you need to drive sales that much harder to compensate for deflation of about 4.5% in the clothing and footwear business.”

Despite this and other challenges, the group managed to produce commendable results for the year that ended on September 30, 2018. Turnover rose by 10.9% to R64.2-billion while operating profit increased by 10.7% to R6.4-billion. However, after accounting for once-off capital items and the R511 million cost that arose from the group’s exposure to the corporate financial guarantee and associated loans (disclosed at the half year), operating profit grew just 1.9% to R5.9 billion.

Double-digit growth from Pep and Ackermans

“The operating businesses have maintained a high level of performance, with double-digit growth from both Pep and Ackermans,” says Naidoo. The JD Group is almost breaking even and the Speciality group of brands (which includes Tekkie Town and Shoe City) grew by 12.5%, a substantial improvement on last year, he says. “We are conscious that this year’s results are less than what we wanted to achieve, however, it is a very competitive result compared to our peers.”

“The growth in turnover was good considering the deflation in a number of their sales categories,” says Reuben Beelders, portfolio manager at Gryphon Asset Management. “Pep and some of its related businesses are businesses that should benefit in the current ‘constrained’ consumer environment in that consumers trade-down in order to stretch their under-pressure budgets.”

He notes though that Pepkor’s African operations were poor with sales growth falling 1.8% across the 12 trading countries. “This is nothing different from what other SA-listed groups have experienced in Africa.” The company puts it down to the lagging effect of low commodity prices, foreign exchange shortages, and high inflation rates that continue to weigh on consumer spending.

The company has continued to put distance between itself and Steinhoff in a bid to reassure investors that steps are being taken to limit the “contamination”. Pepkor will now fund its own credit books for the JD Group and Capfin, and has agreed to terminate its existing commercial relationship with Century Capital (Fulcrum) in a phased approach. “JD Group funds 28% of all furniture sales, we needed the certainty that this funding would remain available,” says Lourens. This will require R4 billion in capital funding over three years, R2.2 billion in 2019 alone. 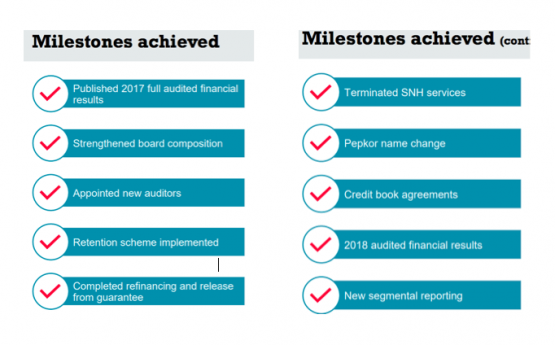 The year also saw Pepkor shut down discount furniture retailer Poco and reassess the capital it allocates to businesses in the stable that are performing sub-optimally. “We are working hard to rebuild trust and credibility in the market,” adds Lourens. “Just providing audited financial accounts, which sounds like a small thing I know, goes some way to restoring that.”

Net debt increased to R12.2 billion (2017: R12 billion) and the contractual net debt-to-Ebitda (earnings before interest, taxes, depreciation and amortisation) ratio of the group was 1.64 times. “This is higher than we are comfortable with,” he says. “The goal is to reduce this to below 1% within three years.”

The group generated cash from operations of R5.3 billion during the year. Cash generation was impacted due to additional investment in inventory, resulting from an increased store footprint ahead of the peak December trading period, stockholding of directly imported cell phones, earlier stock inflows and some carry-over of inventory from the previous season due to reduced sales.

As a result of future capital commitments, strategic investments and the group’s ambition to reduce its gearing to one times net debt-to-Ebitda in the medium term, the board has approved a revised dividend policy of three times earnings cover.

The board has declared a final dividend of 27.8 cents per ordinary share, being Pepkor’s maiden dividend. While the debt is not a major concern Beelders notes that as the group invests cash to “build-up” its debtors’ book over the next year or two, shareholders will not feel the benefit of profitability in the near term. “However longer-term these initiatives should benefit shareholders,” he says.

If the managers thought the PR about Steinhoff was a bitch, just wait until somebody at SARS wakes up and takes a close look athe the R500m bailout the managers received.

Washing away a debt is no different than paying a cash bonus in the eyes of SARS. And that is before SARS takes a closer look at the scheme that created the problem and whether it was a reportable arrangement designed to (1) reconstitute option gains from normal income to capital gains (2) aiming to circumvent SARB rules through externalizing the gain into offshore equity. The bankers and tax advisors should also be nervous