Tiger Brands (TBS) has seen its share price slump by 10% this month as investors weigh up the difficulties stemming from its subsidiary, Dangote Flour Mills (DFM). Although the equity value of Dangote is carried at zero on its books, continued operating losses might suggest that investors have begun ascribing a negative value of R1 billion or R2 billion to DFM. So where did it go so horribly wrong?

Tiger Brands purchased a 63.35% stake in DFM in September 2012 for a total consideration of R1.59 billion, as well as assuming a further R1.5 billion in debt (see table below). It was the company’s third acquisition in Nigeria and its largest outside of South Africa. There were plenty of good reasons for the acquisition. Nigeria is the continent’s most populous country with strong economic growth being experienced up until the end of last year. DFM enjoyed a dominant market presence as the second-largest flour milling company in Nigeria, with market shares of 30% in flour and 40% in pasta.

For the first full year of inclusion in TBS’ results (financial year ending September 2013), DFM posted an operational loss of R389.2 million which included once-off retrenchment costs and bad debt provisions of R85 million. The disastrous performance was attributed to “increases in raw material costs, volume pressures in attempting to recover long-standing customer debts in an industry with significant overcapacity, as well as aggressive pricing by competitors in the Nigerian flour market”.

Tiger Brands managed to claw back some of its initial outlay through the sale of packaging subsidiary, Dangote Agrosacks, back to Dangote Industries, for R470 million.

By the time the company’s AGM rolled around in February 2014, things had clearly become desperate. TBS sought authority to be able to grant financial assistance to DFM under a special resolution. TBS subsequently signed a loan agreement with DFM to provide financial assistance of up to a maximum of NGN10 billion (R650 million).

The interim results ending March 2014 shed further light on the issues confronting DFM. TBS was implementing plans to reduce DFM’s fixed cost base (mothballing mills where necessary) and rebuilding the brand equity of its product basket, as a result of quality issues and internal inefficiencies. The company decided to impair the carrying value of the goodwill and intangible assets to the value of R849 million. This was followed up with a further impairment of unutilised fixed assets of R105 million. The impairments, together with the sale of Dangote Agrosacks, effectively meant the equity valued of DFM had been expunged from the books of TBS. Just the initial debt, and the ongoing funding of operational losses were left.

So, what went wrong?

Anthony Geard, food and beverages analyst at Investec Securities, says: “I am sympathetic to what’s happened to Tiger Brands, as many of the factors that have impacted on the business have been beyond their control. DFM made profits between 2005-2011, with an operating profit margin of roughly 5%. At the time it was the number two player in the flour market, with Flour Mills of Nigeria being about five times bigger.”

One of the factors Geard points to, is the increase in the wheat tariff by the Nigerian government which occurred during the negotiations between Dangote Industries (led by founder Aliko Dangote) and TBS. This represented a large increase in the main input for flour, as wheat (which is priced in US dollars) is fully imported in Nigeria. During the course of the protracted negotiations, investment in production capacity continued, creating a large amount of surplus capacity that later sowed the seeds for the crippling price wars.

Geard also believes a large amount of damage was done to the business before TBS assumed control. “I think Mr Dangote and his management team took their eye off the ball. Mr Dangote was focusing on developing (the much larger) Dangote Cement business. With the previous management asleep at the wheel, the product quality collapsed. While I think Tiger Brands realised this, I don’t think they understood how quickly things had deteriorated. They still thought they could successfully implement their ‘FOG’ strategy (Fix, Optimise, Grow) which they had previously deployed to other acquisitions,” says Geard.

But the company’s due diligence should have picked up some other issues too. One of these related to the relationship Dangote had with his customers. DFM’s business is located in the north of Nigeria – where Alike Dangote has his roots. “TBS were trying to address the large debtors book through collections and the tightening of credit terms in the midst of a pricing war, and clients who had a great deal of personal loyalty towards Mr Dangote may not have had the same affection to the new owners. So many of them left,” says Geard.

In summary, the confluence of these factors led to “the situation becoming quite ugly,” says Geard. “They inherited a business with higher input costs, deteriorating product quality and an industry with surplus capacity. This meant they couldn’t recover costs with higher prices. Then they were tightening credit and losing customers, and suddenly the oil price begins to fall, sending the Naira into free-fall.”

So TBS had to lay off 20% of the workforce, install a new management team and impair assets. “We were seeing a sequential improvement in the operating profit margin up to November last year (negative, but improving) and we thought they were going to turn the corner. But then the oil price collapsed, sending the cost of imported wheat through the roof. Now I can’t see them making money in the next two years as selling prices just cannot keep up with costs,” says Geard. He expects DFM to incur an operating loss of R200 million this year, with a smaller loss to follow next year.

As can be seen from the graph, TBS enjoyed a strong run from the end of last year – rising 26% to peak at R398/share on the February 3 2015. TBS’s P/E ratio had begun to move out of the 16-18x band it had remained in during most of 2013 and the early part of 2014. February 3 happened to coincide with a quarterly update from DFM, which described ongoing increases in raw material costs and further expected devaluation of the Naira over the course of the year. The P/E ratio has now fallen below the trend line as the share price slumped from R398 to the current level of R347. The slump could be attributed to the negative sentiment attached to the problems facing DFM, or alternatively a negative value being placed on DFM as investors weigh up how much money TBS needs to pump into the business to keep it afloat.  So there might yet be light at the end of the tunnel. But for now, it’s a case of trying to stem the bleeding. 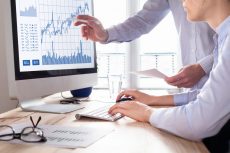