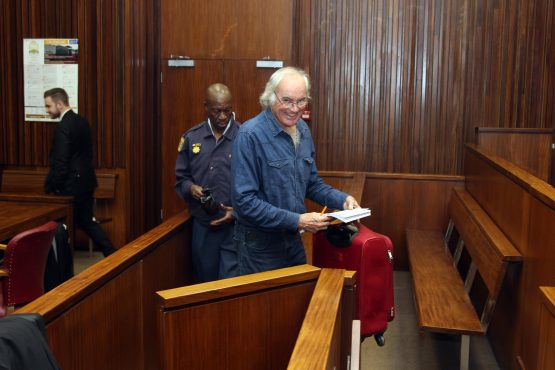 Despite video evidence indicating that deception has been taking place, Gary Porritt maintains that he has not been feigning illness. Picture: Moneyweb

After almost two years in prison Gary Porritt, former CEO of JSE-listed financial services group Tigon has petitioned the Supreme Court of Appeal (SCA) in an effort to regain his freedom.

Porritt and his former co-director Sue Bennett are on trial for fraud, racketeering and contravention of the Income Tax and several other acts. The charges relate to the collapse of Tigon around 2002.

The pair’s trial only started late in 2016 after they apparently stalled the commencement by bringing a variety of appeals and applications. When it eventually started, the trial progressed at a snail’s pace.

Porritt frequently interrupted proceedings, complaining that he did not have enough time to make notes. As the accused are unrepresented in the trial, judge Brian Spilg had to indulge them to a certain extent to ensure they get a fair trial.

When Porritt failed to appear in court in June 2017, Spilg had him arrested at the KwaZulu-Natal psychiatric hospital where he was at the time and brought to Johannesburg for an enquiry to determine whether his absence was through his own fault.

Spilg found at the time that Porritt deliberately planned to avoid court on several dates when he allegedly fainted and was subsequently admitted to hospital.

Porritt forfeited his bail of R100 000 and has been held in the Johannesburg Central Prison, also known as Sun City, ever since. Whenever his trial is in session he is brought to court in shackles.

A full bench of the High Court in Johannesburg overruled Spilg’s decision and found that Porritt’s absence following his first admission to another hospital on June 12, 2017, and his absence in the following days, was reasonable. It however dismissed the appeal with regard to Porritt’s absence on June 19, when he was in the Oatlands psychiatric hospital.

Spilg found that Porritt deliberately engineered this admission to find an excuse not to be in court and the full bench agreed.

In the supporting affidavit Porritt questions the full bench’s logic. He argues that if hospitalisation was a good enough excuse for his absence on June 12, 13 and 14, it should have been accepted for June 19 as well. He says the full bench in effect found that he was malingering (feigning illness) on June 19 and denies that.

Read: Malingering = pretending to be ill to escape duty or work

Porritt further denies that he followed a strategy to get the medical practitioners to assist him in delaying the trial.

He disputes the full bench’s rulings on evidence, including:

The state is opposing Porritt’s applications to the SCA.

In a supporting affidavit advocate Gerrit Louis Roberts SC, a senior deputy director of public prosecution who has been coordinating the prosecution for the National Prosecuting Authority and signed the indictment in 2005, denied that Spilg ever made a finding that Porritt was malingering.

He in fact found that Porritt did not intend to appear in court because he wanted to delay the proceedings.

Roberts pointed out that the full bench refused to admit new evidence because that should be addressed in a fresh bail application.

He says Porritt, duly assisted by counsel at the time, was the one who decided against calling the eye witnesses to testify and only tried to do so at a very late stage at the end of the enquiry. Porritt hid the fact that one of the eye witnesses, a woman called Vanessa Pretorius, actually accompanied him to and from a restaurant at which he fainted on June 9, and could therefore have shed light on the matter, even from his own counsel. Roberts says Porritt did that to avoid making Bennett, who according to testimony was also his romantic partner, jealous.

Roberts argues that the evidence of these witnesses is irrelevant to the events of June 19 and that Porritt failed to call his own son, who was present in court at the time, to testify about a subsequent collapse.

With regard to the video evidence, Roberts quotes the full bench’s summary of what transpired at the Milpark hospital: “ … the appellant was not walking slowly, he was not immobile or uneasy on his feet, and he had no difficulty sitting up and sitting on a chair, as opposed to lying on the floor. The video extends over a period of hours and the appellant over those hours does not change.”

In his response to the state’s reply, Porritt persists in his arguments and says the state does not know the nature of his relationship with Bennett.

Read: Forensic expert to testify about flow of Tigon money

TO ALL THOSE PEOPLE HE ALLEGEDLY ROBBED, He needs to wipe that B S smile off his face. Jail is really not a smiling place. This is a facade.

This will soon surpass “The Bold and the Beautiful” as the longest running soap opera in South Africa.

If this is how weak the courts are…how on earth will they deal with the Guptas – if the authorities ever find them! What a mockery this makes of the judicial system in this country.

You are so right Mac.
People are penniless because of them then he acts like a fool that he is. By the time he is sentenced he would have served his time in luxury.

The only mistake this guy made was to commit his crime ten years too early, when police and prosecutors still had some competence in financial matters.

A glowing example of how “the law” has been specially designed to afford the politicos and the wealthy multiple loopholes thru which to duck and dive.
And of course the lawyers love it. Repeated court appearances = repeated fees.

such an “intelligent” business man behaving like a clown…..just postpone his bail indefinitely.

The judge has to watch his step- that all-empowering constitution is watching him.