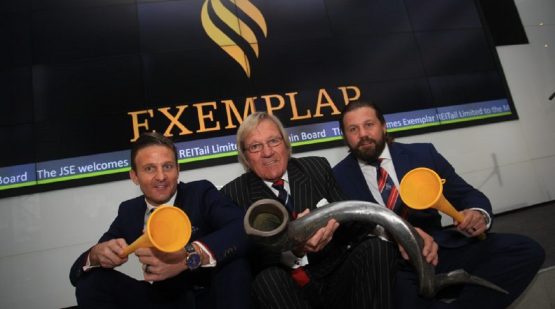 The McCormicks at the listing of Exemplar in June 2018 – (from left): Jason, John and Matthew McCormick. Picture: Supplied

Township and rural focused shopping centre landlord Exemplar REITail, which was the only real estate investment trust (Reit) to list on the JSE last year, is now targeting acquisitions for growth beyond just new developments.

That’s the word from Exemplar CEO Jason McCormick, speaking to Moneyweb this week following the small cap’s results announcement on Tuesday for the nine months to February 28, 2019.

Exemplar listed on the JSE in June last year in arguably the most volatile year for the Reit sector. McCormick says that despite the tough property market conditions, Exemplar is being positioned for growth. He says this relates not only to the rollout pipeline of new developments: “We are also increasingly looking at acquisitions for accretive growth.”

“The idea to list the portfolio was to access capital and benefit from being a Reit, however, we are yet to raise capital … we could look at a few capital raises in the future if good opportunities come our way.”

In its reporting period, the company made two acquisitions – Kwagga Mall in Mpumalanga and Modi Mall in Limpopo. McCormick says the Reit is looking at further acquisitions, but is focusing on retail opportunities “that can add value”.

The McCormick family, which has over 35 years’ experience in the development and management of rural retail centres, listed Exemplar on the JSE’s main board on June 12 last year. MPD was started by Jason McCormick’s father, John McCormick, who is regarded as one of the pioneers of rural and township retail development in the country.

Exemplar has first right of refusal for all of MPD’s developments, subject to approval from Exemplar’s Investment Committee. MPD’s development pipeline currently stands at over half a million square metres of retail space.

Jason McCormick says key future flagship shopping centres under development include the 46 000m2 Mall of Tembisa, opening next year, as well as the 22 383m2 Dobson Place in Dobsonville and the 60 000m2 Capital Mall in Pretoria, both opening in 2021.

“Of the 15 developments we have planned over the next few years, valued at some R7 billion, half of these will be in Gauteng. Our focus is largely on Gauteng, Mpumalanga, KwaZulu-Natal and the Eastern Cape. With regards to the Western Cape, while we would love to do developments there, land is simply too expensive, so the Western Cape is not on our radar right now,” he adds.

Asked about Exemplar’s performance, Craig Smith, head of research at Anchor Stockbrokers, says: “We don’t formally cover Exemplar. But from a high-level view, it is a very focused business with a phenomenal track record and solid pipeline. Results were broadly in line with expectations.”

Nesi Chetty, senior fund manager at Stanlib, notes: “Exemplar is one the smaller niche retail funds. It has done well to deliver a total annualised return of 14.2% in a tough retail market. Vacancies in the portfolio continue to be steady at 3.1% and are at a similar level since its listing in mid 2018.”

He adds: “The fund is now a decent size portfolio at R5.4 billion with all assets internally managed. Alex Mall, Chris Hani Crossing and Tsakane Mall in the East Rand continue to be flagship retail properties in the portfolio with good performance.

“Exemplar continues to have rights of first refusal to MPD’s pipeline of 550 000m2 of GLA [gross leasable area], which will unlock value for the company in the future. Management has however been cautious on debt and has kept the loan-to-value ratio of the fund at 30%.”