Vodacom cut its full-year dividend to R7.95/share for the year ended March 31, 2019, a 2.5% decline from the R8.15/share it returned to shareholders in 2018, with the payout impacted by the issue of additional shares for a new black economic empowerment transaction.

The telecommunications group reported headline earnings per share of R8.62 (using IAS 18 accounting standards), a decline from the R9.23 reported a year ago. Net profit was R24.5 billion, from R24.3 billion previously.

“The financial impacts of delivering on our promise of further reducing the cost to communicate in South Africa, combined with costs associated with concluding our new R16.4 billion BEE deal, is evident in the subdued increase in our operating profit,” said Vodacom Group CEO Shameel Joosub in commentary alongside the results.

“This masked an otherwise solid operational performance for the group, where service revenue grew by 5%, led by a strong performance in our international portfolio. Excluding one-off BEE costs, group headline earnings per share rose by 4.2%.”

Indeed, the international segment did well on the back of improved economic and political environments. International service revenue grew by 15.6%, with margins expanding. Data revenue rose by 25.8%.

Vodacom added six million customers across the group (including Kenya’s Safaricom) in the 2019 financial year, bringing its total subscriber base to 110 million. It invested almost R13 billion in network and IT infrastructure.

Safaricom contributed R2.8 billion to Vodacom Group’s operating profit, with the Kenyan operator reporting a 7% increase in service revenue and a 13.1% improvement in earnings before interest and tax. This was “underpinned by strong customer growth and M-Pesa revenues”.

“The Safaricom acquisition has proven to be a catalyst for extending our mobile money leadership position on the African continent and in ensuring that financial services have become a significant contributor to the group’s revenues. In the past year, we effected 11 billion transactions worth R2-trillion to 36.1 million customers across our financial services network, including Safaricom. In South Africa, our profit before tax from financial services doubled to R1 billion, while M-Pesa revenue grew by 32.2% to R3.1 billion in our international operations and now makes up one-sixth (15.8%) of that portfolio’s entire service revenues.”

In South Africa, the group said it is encouraged by the growth in service revenue of 2.1% “despite the low economic growth environment” and “deliberate actions to reduce prices for all segments”.

“We are particularly encouraged by the noticeable rise in new contract customers in the fourth quarter in both the consumer and enterprise segments,” it said.

It said data prices fell by an average of 37% during the year, amounting to a R2 billion cumulative saving for customers. “Over a three-year period, data prices have fallen by 57%; despite not having access to further available spectrum.”

So a normal shareholder gets a kick in the teeth just to give away stuff to an ethnic group?

Very glad I liquidated all Vodacom shares. Never going back

Redistributing YOUR wealth if you are a shareholder!

Incredible that these companies still need to do new BEE deals after already being empowered. Costing investors at a time when performance has been flat for years. Not very hard to see why we will probably stay in a low growth scenario indefinitely. 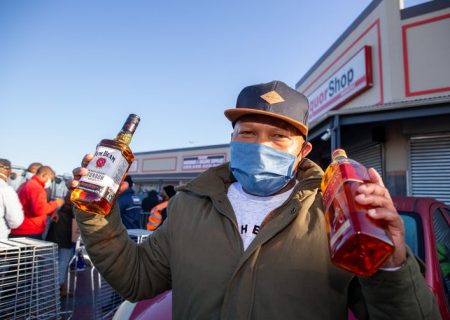 Steven Friedman / 6 Jun 2020
Lockdown rules started with high legitimacy. But it has been eroded and has now dissolved.
9