Vodacom plans to invest R10.5bn in network, expand into lending and investments

FIFI PETERS: Vodacom, which released its first-half results earlier today, says it plans to invest R10.5 billion in its network in the current financial year. The company added 6.2 million customers in the period, taking total subscribers to almost 130 million.

Vodacom CEO Shameel Joosub joins the Market Update. Shameel, thanks so much for your time. Just talk to us about the R10.5 billion and exactly where that’s going.

SHAMEEL JOOSUB: Thank you, Fifi. A lot of the investment is going of course into being able to keep abreast with the demand for mobile data and the growth that we’re experiencing. So a big portion of the investment has gone into that.

Then of course, with the current power cuts, a lot of investment will go into things like batteries and these type of things so we can try and keep the network up, even when the power goes down – a large investment is going into that. And then of course also investing into fibre back wall……14.4 and then of course, financial services and IT.

SHAMEEL JOOSUB: I think it contributes towards government’s broader plan, as does the whole telco sector. I think the telco sector spends close to R30 billion a year. Of course that does help in the delivery of the plan for SA Inc, so to speak.

FIFI PETERS: It has been quite a busy six months for the group, Shameel, with your entry into Ethiopia, with the consortium there, and now more recently Egypt. I think that the opportunities are well known, just given the company’s communication around why you are doing these deals. But what are the major risks to these transactions realising value?

SHAMEEL JOOSUB: Well, I think of course the opportunity’s there; as you’re saying, with all these opportunities come risks. Of course things like the exchange rate play a role, and you always have to watch [that]. Political unrest is another issue that is always there as a risk across all our markets.

But other than that, I’d say a lot of it is within our control – making sure that you buy in the right teams, you’ve got the right management, and that you executing on the opportunity.

FIFI PETERS: On the pandemic, inasmuch as your sector has benefited from the increased demand to do everything online, there have also been pressure points. I’d like to understand the shortage around semiconductors – to what degree has this been a pain point for Vodacom?

SHAMEEL JOOSUB: Of course the pandemic has increased in South Africa quite dramatically, so the demand on the networks and the investment – that’s the R10.5 billion – is there and you have to constantly make sure that you’re keeping abreast so that your customers have a great experience. The shortage of semiconductors is not great, to be frank, because it affects the supply of devices. It affects the supply of network equipment and so on and causes delays.

At this stage we are trying to manage it by being proactive in procurement and that type of thing, but it does depend on how long this shortage prevails because it will affect supply.

FIFI PETERS: Just further speaking to supply, we have seen the pandemic affecting supply chains globally and delaying the arrival of new stock for most businesses. What’s the situation like in your stores?

SHAMEEL JOOSUB: We’ve tried to make sure. Of course you will have certain devices being in short supply or not getting the volumes that you want. An example would be the launch of the new iPhone. The demand is much bigger than the supply and, of course, with things like semiconductor parts you normally have a shortage – anyway of Apple devices – when you launch. But these things will be a role for everybody. I don’t think any supplier is immune. Some might be better prepared than others, but it does affect that ready availability. Now you’re introducing more suppliers in some respects, just to make sure that you’ve sufficient stock.

FIFI PETERS: Shameel, moving away from the pandemic, you recently brought 5G to Mpumalanga, I believe, following the rollouts in Gauteng and Cape Town. Just talk to us more broadly about the 5G plans, and which cities are next.

SHAMEEL JOOSUB: I think we will continue to expand. First you start with the big cities, then the secondary cities, and you continue to expand and continue to grow out the 5G penetration. Part of it also depends on how quickly the prices of the devices come down.

So we’ll continue to invest in the network, but we also have to be able to cope with the traffic and be able to shift traffic from the 4G network onto the 5G network, which is a better technology for data.

But it also comes down to affordability. You don’t want to dash out and cover the entire country and then basically not have the devices, and the affordability of the devices. So you have to be very succinct and very savvy in how you invest.

FIFI PETERS: Just lastly, regarding your financial services division, we have seen revenue in that division continue to grow strongly. You are now Africa’s largest fintech platform by [number of] subscribers. How do you plan to further leverage this position?

SHAMEEL JOOSUB: I think what we have is a really solid platform. We now process $302 billion a year, which is R4.5 trillion a year. So with 57 million customers now buying a financial service product from us we continue to evolve our M-Pesa platform, but you’d also have seen huge ties with the launch of VodaPay in South Africa, which has been unbelievable in terms of the uptake in a little over four weeks. So very, very exciting in that respect. You’ll see us increase the number of services, but also bring the e-commerce part of VodaPay into our international markets.

We are increasing the number of use cases on both the VodaPay platform and the M-Pesa platform. Yes, I think it’s going to be very exciting because we’re now expanding into lending, investments in marketplaces. You can shop online on the VodaPay platform, and that capability will be brought into M-Pesa as well.

FIFI PETERS: All right, Shameel. Thanks so much for your time. We’ll leave it there, sir. That was the CEO of Vodacom group, Shameel Joosub. 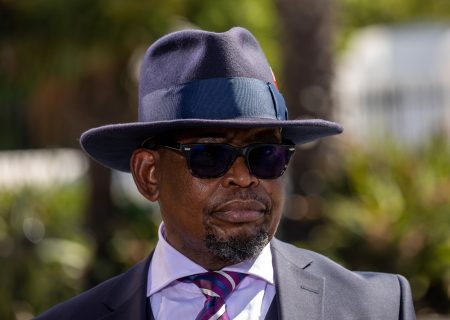