Volkswagen on the electric vehicle offensive 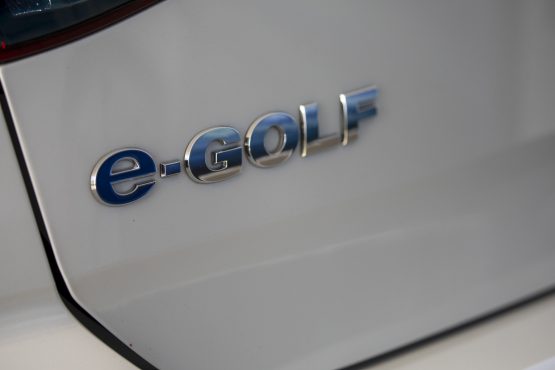 VW says it will bring 60 e-Golfs into SA by the end of the year as it looks to spark interest locally. Picture: Alex Kraus/Bloomberg

Volkswagen Group South Africa is working on a comprehensive electric mobility strategy with the purpose of laying a strong foundation for the introduction of battery electric vehicles into its key brands and removing the risk to its lucrative export business.

Thomas Schaefer, chairman and managing director of Volkswagen Group South Africa, said on Wednesday it was a myth if South Africa believed it could carry on producing vehicles with traditional engines when the rest of the world is going electric.

Schaefer said at the Festival of Motoring at Kyalami that the demand for traditional vehicles is reducing while demand for electric models is increasing.

“We will face a time when traditional vehicles will get more and more expensive and electric vehicles cheaper. This could change overnight.

“In South Africa we cannot wait and see for forever, and that is why we engaged the Department of Trade and Industry,” he said.

This was a reference to recent discussions by Volkswagen, Nissan Motor Company and BMW AG with the department about bringing the electric vehicle revolution to South Africa.

Read: BMW, Audi, Porsche, Tesla – which electric car is right for you?

Schaefer said they had good engagements with trade and industry minister Ebrahim Patel in the past two weeks, where they showed the minister what the world was doing and where South Africa should be going, including with the South African Automotive Master Plan.

The Automotive Master Plan replaces the current Automotive Production and Development Programme (APDP) next year and runs until 2035. It makes provision for electric, hybrid and fuel cell vehicles.

Schaefer believed from the engagement with Patel that there is a much bigger interest “to come along with us and decide on electrification of South Africa in the automotive space”.

“Will it happen overnight? No it won’t. But we have to. We cannot stay behind. We as a company export 70%.

“Our exports are in danger and so we need to get onto this bandwagon,” he said.

Schaefer said he was very hopeful South Africa’s automotive industry could wrap up its discussions with the trade and industry department soon and come up with “a real plan”.

He stressed that the plan would not be implemented overnight, saying they are talking about a 10-year transition period.

Mike Glendinning, director of sales and marketing at Volkswagen Group South Africa, said many countries in Europe are moving away from vehicles with internal combustion engines to electric vehicles, partly to comply with EU C02 emission requirements.

Glendinning stressed that South Africa would eventually be forced to follow suit but the successful introduction and marketing of affordable cars in South Africa, including electric vehicles, hinged on some key factors.

The most important of these are the need for government support in the form of incentives and the reduction of the 25% import tariff on electric vehicles to ensure improved affordability and pricing, as well as accessible and affordable charging infrastructure in the major cities and on the major roads, he said.

Glendinning referred to comments by Volkswagen Group chief executive Herbert Diess at the company’s recent annual general meeting about the group’s electrification offensive strategy, which includes plans to invest about 30 billion euros in electric mobility between now and up to 2023.

Glendinning said it was clear that in the future the electric car would be a key success factor in the automotive industry.

He added that with the imminent launch of the Audi A3 electric vehicle, the Volkswagen brand was entering the third major chapter in its history following its launch of the ‘people’s car’, the Beetle, after World War 2, and the Golf in 1974.

Glendinning said Volkswagen Group South Africa is in discussions with its headquarters to be considered for the range of Audi electric models and remains optimistic about introducing battery electric vehicles into its model range in the near future.

He confirmed they would be bringing 60 e-Golfs into South Africa by the end of this year largely for testing and planning purposes and to generate media and customer interest.

Glendinning said it is their intention to expand this in 2020 with some Audi A3s as they actively engage with customers on the electric vehicle driving experience in the build-up to their new generation Audi vehicle launch, which is planned for 2021.

“We want to show people that electric vehicles can be sporty, fun and can deliver an exhilarating driving experience,” he said.

“We are very excited about the opportunity that electric mobility brings to the future of the Volkswagen brand and this strongly supports our medium-term goal to future-proof our brand with innovative, compelling and desirable models that customers need.”

Given Africa’s strength in the minerals needed, investing upstream in battery cell manufacturing could be a great opp for the country and exports

The problem will be a tender that looks at the cheapest price and they will get what they pay for.

My solar array disagrees.
But nonetheless, its still better than petrol/diesel fired cars.

The e-golf is pretty much EOL.
I would rather wait it out for the new VW ID3, that is going to be a game changer.

the days of the internal combustion engine are numbered, yet you wouldn’t believe that if you read articles by motoring journo’s in SA; words like ‘petrolheads’, ‘vroom factor’ etc. But when it comes to EV’s – virtual silence.Yes there are few recharging stations, prices are high for now, and battery technology is still evolving. Auto air pollution is deadly for human health, let alone the whole climate issue. Incredible that we have a huge auto industry and yet we only produce ice’s.Dinosaurs.

May I be right in assuming that most of these motoring journalists are “sponsored” by companies that have stakes in petroleum products.

I wonder what will happen to all the filling stations that are suddenly mushrooming all over the place? Seems the Engen’s and Shell know what is coming their way and flogging the opening up of petrol/diesel filling stations.

I wouldn’t bet on it anytime soon. The electric engine has actually been around a lot longer than people think. So has hemp fuel, paper, plastic etc. The oil giants will not relinquish their power without a massive fight using the most nefarious tactics.

Correct….for long distance trips between Gauteng & WC (or KZN) you leave the EV at home, and fly instead with green Kucumber or orange Pawpaw.

When will Boeing develop an electric airliner? Then travel will come a full circle.

Very expensive solution if you can only fly Airlink as is our lot. And then rent a car at your destination… So no, although commendable, not practical for all but the elite.

This won’t really be such a problem with the new VW ID3 coming in 2020, it will cost the same a top line diesel golf R500K+-

And you will have around 400KM’s of range, so a 1000KM trip would take 2 charge sessions and with 125KW charge capabilities you can charge the ID3 in around 40 mins from empty.

So making 2x 40 min stops in a 1000KM journey is definitely not unreasonable.

…and end up taking 2 days because of load shedding or cable theft. If EV manufacturers agreed on standardisation to enable, say, swopping of batteries or leasing additional modules which can be exchanged at the next station for the fully charged.

@KennethRampou
That is a horrible idea, these battery packs weight over 200KG, and making them easily accessible would be both a safety and security risk (imagine waking up to find your batteries stolen out of your car)

Remember you can charge a electric car anywhere there is electricity, if you ask me people who drive petrol and diesel cars are at MUCH greater risk, you can easily make your own power, have you ever tried making your own unleaded 95?

Cars are like shaving. You’re either the blade/soap/warm water type OR the electric shaver type.

I’m ready to convert to EV (once priced reasonably), as I enjoy my Phillips shaver!