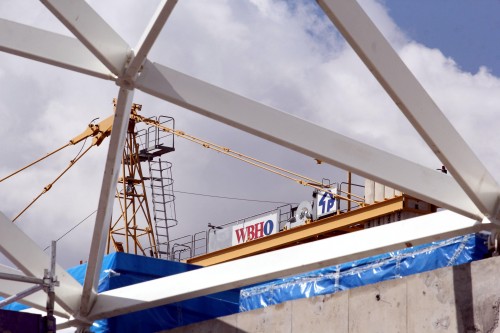 The losses recognised on the project in Melbourne overshadowed solid delivery from the group’s African and UK operations as well as its Australian building business. Picture: Moneyweb

Wilson Bayly Holmes-Ovcon (WBHO), which for some time was almost the only shining light in the financially distressed JSE-listed construction sector, continues to take financial strain from the losses incurred on a road contract in Australia.

WBHO said the forecast loss position on the Western Roads Upgrade (WRU) project in Melbourne in Australia, as previously reported, had negatively affected the group’s operating performance in the current financial year.

The group in February this year reported making an unprecedented A$50 million loss provision in the six months to December on the WRU project and that it was considering a number of options to recoup the losses on this contract.

The loss provision related to a design and construct contract, comprising eight packages for the widening and upgrading of various roads and intersections in the western suburbs of Melbourne.

It also reported on Monday that WBHO chairman Mike Wylie had, after 45 years of exemplary service, indicated that he intended to retire at the group’s general meeting on November 20.

Group chief executive Louwtjie Nel has been appointed executive chairman to ensure the constructive and effective relationship between the board and executive management continued.

Wolfgang Neff, who joined WBHO 22 years ago and has been managing director of its North and Africa Building Divisions for the past seven years, will replace Nel as chief executive.

Nel said in February the WRU loss was caused by the incorrect interpretation of certain technical specifications, resulting in the underestimation of the physical work necessary to meet the output specifications of the contract.

He added that WBHO had terminated 22 members of the corporate leadership and bidding teams for the contract in December last year and had temporarily withdrawn from a design and construct role on new project bids with the same risk profile in the eastern region of Australia.

The losses recognised on the project overshadowed the solid delivery from WBHO’s African and UK operations as well as its Australian building business, he said.

Nel said there were a lot of issues WBHO and its consultants needed to deal with to sift out where the problem arose, adding there were three big international design engineering companies on the project.

“If somebody has made a genuine mistake, they have to own up to it.

“We (ideally) want an amicable settlement. If it comes down to a claim, we will do a claim,” he said.

Previous interim operating profit down from R510m to R3m

In the six months to December, the losses on this project resulted in WBHO reporting an 80% reduction in diluted earnings a share to 145.5 cents from 726.6 cents in the prior period and total operating profit slumping to R3 million from R510 million because of the loss provision for anticipated losses to be incurred on the project.

In a market update issued in June this year, WBHO reported a 5.5% decline in its total order book in the four months to end-April to R47.3 billion from R50.1 billion at end-December.

All of this decline related to WBHO’s Australian business, whose share of the total order book declined to 54% at end-April from 66% at the end of June last year.

However, WBHO said the Australian building book remains strong despite reducing, with growth in student accommodation and commercial refurbishment sectors.

The group said the forecast loss position on the WRU project is expected to remain as reported in its interim results, with delivery in line with the completion programme.

It said the design has been split into functional packages to achieve sign off and not to affect the construction delivery programme, and that discussions are continuing with the client about variations and potential claims.

“Potential claims against professional designers will be finalised for submission in due course,” it said.

Another ill South African company-yesterday was Blue LAbel, Sasol and City Lodge-things are really bad here in the ANC paradise

We are living in an international deflationary spiral that is much worse than the Great Depression of the 1930s. Money-printing by major Reserve Banks can support share indexes in nominal terms, but it does nothing for the profit-margins of primary industries. This situation is getting scary, to say the least. Similar economic situations have led to serious social upheaval in the past.

We’re already seeing all the foundations for mass civil unrest and social upheaval. Look at Hong Kong. Wall Street has seen several protsts. France yellow vests.. In SA we have a strike every other day. The world is gatvol of banks destroying their spending power..