Where banks fail (and win) on transformation

One bank, surprisingly, is stone last when it comes to most levels of management.
By Hilton Tarrant 22 May 2017  00:25 There is no clear winner among the country’s five retail banks when it comes to transformation when measured on the employment equity score. In aggregate terms, Capitec Bank leads the way with nearly nine black employees out of every ten. In its annual report, the bank says its approach to employment equity integrates with its strategy for staffing of branches, which is “aligned to the local demographic of each branch by employing people from the surrounding area, ensuring [a] cultural fit with the client”. Unsurprisingly, Capitec also has the youngest workforce among the five, with 71% of its staff under the age of 31 (and 88% under 36).

Barclays Africa Group lags on this aggregate measure of employment equity, with only 69% of its South African workforce black as at December 31, 2016. FirstRand, Nedbank Group and Standard Bank Group are at 76%, 78% and 79%, respectively.

It is important to note that this overall measure does not carry any score in the BEE sector code. But, without a representative overall employee base, it will be near impossible to meet management targets, which do matter.

* As presented to Parliament. If just Stratco was used, as is the case in other banks, this would drop to 22%.

On the current scorecard, three of the five banks meet the target when it comes to junior management. In submissions to Parliament’s hearings on transformation in the sector, most banks seemed to indicate that progress had been sufficient in both junior and middle management ranks. Barclays Africa chief executive Maria Ramos made the point that there is “steady progress being made in all tiers of management but more needs to be done”. The bank says 88% of new hires are black, and 83% of new promotions are too. 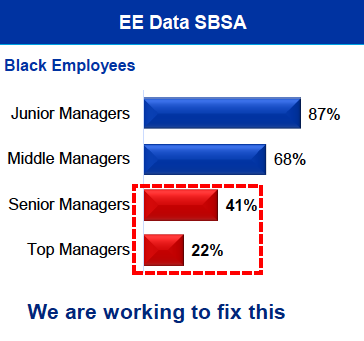 However, when looking at the middle management score, no bank is anywhere near the current (and likely future) sector target of 75%. Only Standard Bank, at 68%, has a realistic chance of reaching this in the near term.

In senior management, the picture deteriorates further with four of the five banks hovering around the 40% mark. This clustering points to a structural/supply problem in the sector, and with good and decent progress in the junior and middle management ranks, respectively, this situation will resolve itself automatically in time.

When it comes to top management, however, only Nedbank can be commended. It has managed to substantially transform its exco. With 54% of the 13-person executive leadership team being black, it currently exceeds the target of 40% and has a realistic chance to meet the new target of 60% in the draft sector code. In FirstRand’s submission, Burger pointed out that “top management progress has been slower than hoped and more work needs to be done”.

Nedbank is the obvious outlier on this measure. The other banks are all at around the 25% mark, with FirstRand at either 22% if the strict definition of Stratco (its exco) was used, or 34% as per its submission to Parliament.

In FirstRand’s submission, Burger pointed out that supply “has been one of the constraints” when it comes to progress in top management.

Using the supply of Chartered Accountants as a proxy, FirstRand pointed out that only 26% of the CA base in the country was black. This is a substantial improvement on the 7% in 2002, but was still far off being representative.

What is surprising is that Capitec is in (the distant) last place on every measure but one, and on that score (junior management) it is in second-last place. The bank does not provide any detail on how it’s addressing this issue in its annual report, and is among the three banks who do not produce a specific transformation/B-BBEE report annually (only Nedbank Group and Barclays Africa Group do, while Standard Bank Group and FirstRand’s operating units (including FNB) publish broader ‘Reports to Society’).

One area where Capitec ought to be commended is the fact that it has two development seats on its executive committee that rotate annually. These “provide senior employees with the opportunity to gain experience at an executive level”. The bank says the development members for 2018 are Jerome Passmore (head of its project office) and Dumisani Ncukana (operations manager at head office).

Employment equity, however, is but one score when measuring against the sector’s BEE scorecard. Currently, it accounts for 15 of the available 100 points, and three of the seven bonus points). Management control counts for eight points out of 100, and one bonus point. In the draft amended financial sector code, published for public comment a year ago, the measurement shifts from employment equity to management control only.

The draft amended code states the following targets when it comes to management control (which accounts for 20 of the 112 points for banks):

Everyone in the banking industry knows that stats are a useful tool to deceive. So I view this data very cautiously.Window-dressing and honest transformation are uncomfortable bedfellows. That said, we also know that competence (skill) in the workplace is generally the result of sweat over the years whilst acquiring relevant banking know-how in a wide range of functions. 10 years experience is meaningless if it is 1 year repeated 10 times. So the bank with the most promising long term prospects (10-15 years) to my mind is Capitec so long as it adheres to a genuine honest transformation plan

Genuinely curious as to what you mean by “long term prospects”? Human capital development? Improved client service/value? Or investment returns for the shareholder?

I worry about Capitec, that it will go the same way as African Bank.. Let’s hope not!

No matter how you view it or how you want to see it, Banks function on having staff that are competent to do the work and compatible with the outlook and structure of the products they sell. The banks should be color blind when employing people and ONLY take in those that have the competencies to function and benefit their specific needs in order to make a profit while giving the clients top service.

As for the BEE code and the government supposedly levels of Transformation, well, that is all window dressing and bull$h1t. Businesses function on skills and not colour. It is as simple as that. Or else you end up being captured just like many SOE;s are.

Agree Sweetpea, banks have cost me money when processes ground to a halt because of incompetent people employed.

The transformation issue is also stuck in the inherited monopolization of the financial sector where a clique of 5 banks control (in-competitively) the banking landscape in SA.

SA needs something like five more banks right now to break the monopolization and this would also give more avenues for employment absorbsion.

There is a new Govt Bank in the Cape. So lets see how that performs. If well I am sure the Government will deploy throughout the country. Apparently it serves those who earn R15000.00 providing funds to first home buyers.

But do not forget to include senior management statistics in the Government space. How about letting us know the success of senior management in opening own enterprises what with the assistance of Development bank and grants etc etc

As with Naspers and Sanlam, this is one of the lily-white legacies of the national party government.

The Broederbond is strong in these.

Yawn yawn yawn, our bitcoin is over 30k this morning and Ethereum is flying. World wide millenials cant get enough of this stuff. You can take your transformation and stick it. The world is a big place and the new digital economy doesn’t care about your hang ups and hand outs.

Capitec is part of the same group as PSG who proudly announced in 2015 intentions to get more black advisers.Go to the PSG website and my computer screen has never looked whiter.Not that i expected anything to change if you not committed to change and want to window dress.Still a good bank nevertheless and a thorn in the side of the big 4.

You are very correct Sweetpea but looking at the South African context, the black race has been at an disadvantage for decades (apartheid, Bantu education, etc.) and if transformation is not stimulated in the private sector there is a ticking time bomb that is going to happen. The poverty and unemployment levels amongst the black community are very high and worrisome and if not addressed through aggressive policies, all those people are simply going to turn to crime and come take your hard earned wealth from your house. It would be beneficial as well to have an efficient government to speed track education and skills to previously disadvantaged communities but everything ends up being a tender…which simply means corruption…

Considering that service business relies on service, this is dependent on quality of service. I see this is a matter of competence, thus in training and education, and thus consequently on quality of management.

This in turn implies that BEE is hardly a contributor to the success of a business.

Which in turn begs the question of what does BEE do for business, or, for that matter, how it benefits the people of the country that it is supposed to benefit, other than very limited on a very small scale?