Why MTN wants, no, needs Telkom 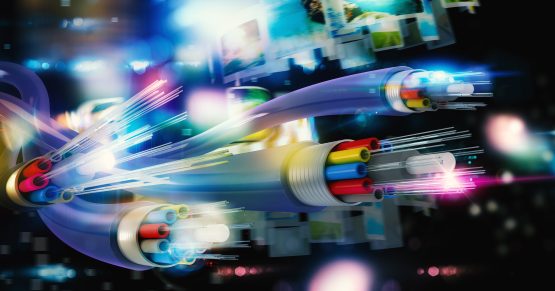 Friday’s announcement that Telkom is in talks to be acquired by MTN is not the first time these two telecoms operators have flirted with some sort of transaction (either formally or informally). And it’s certainly not the first instance of Telkom looking to M&A activity to solve its situation of being sub-scale in mobile.

But the current potential takeover is about one thing only: Telkom’s market-leading fibre network.

Read: Telkom shares soar over 26% as MTN wants to buy it

Its wholesale Openserve division has more than 169 000km of fibre in the ground across long-distance links, metro rings and fibre-to-the-home (FTTH) or -business (FTTB) deployments.

By contrast, MTN’s fibre network in South Africa is likely not much more than 25 000km (the figure from around a year ago was 23 000km).

Had Vodacom not concluded a complex but smart transaction with Remgro’s CIVH which owns Dark Fibre Africa (DFA) and Vuma to merge their fibre assets into a new vehicle, there likely would not be this sudden urgency on the part of MTN to catch up.

The Vodacom/CIVH deal is smart. Vodacom will inject its fibre assets into an InfraCo/FibreCo that will house CIVH’s DFA and Vuma assets and pay R6 billion for 30% of the new business. It has an option to increase this to 40% in a fairly short period of time.

This convoluted structure, where all the fibre assets are housed in a separate open-access entity, has likely been designed to assuage concerns from competition authorities.

There are two stated reasons why Vodacom is doing this deal: for “gigabit transmission and backhaul” and to “enhance” its home and business connectivity offering.

It is the first of these that is arguably the most critical. In a Remgro presentation about CIVH last month, there is a single slide that sketches the opportunity for fibre.

Mobile operators are increasingly desperate for fibre back-haul for data-hungry 4G and 5G networks. This is going to increase dramatically, especially in urban areas. There ought to be no surprise that Vodacom and CIVH have concluded this transaction. Former Vodacom CEO Pieter Uys is a senior executive of Remgro, focused on strategic investments, while former Vodacom CTO Andries Delport is CEO of DFA.

So, then, MTN has some catching up to do. Its executives will know that, absent any M&A activity, it will firstly have to trench and light up an enormous amount of fibre each year and, secondly, it will be paying a large amount of money to DFA annually as one of its biggest customers.

If the Vodacom/CIVH deal closes (which it surely will) – Telkom aside – there is no other substantial fibre network up for grabs.

Liquid Telecom’s network (formerly Neotel) is somewhere around the same size as MTN’s, and everything is smaller after that.

The challenges of getting government to agree to sell state-owned Broadband Infraco, with around 15 000km of fibre, is surely simply not worth the effort (if possible at all). Seacom’s ±4 000km pales in comparison.

On the fibre-to-the-home front, Telkom’s Openserve leads with a 46.3% connectivity rate, meaning it connects nearly one out two homes (46.3%) of the nearly 850 000 that it passes.

By comparison, the average uptake rate of CIVH’s FibreCo (effectively Vuma) is 33.8%, across the 1.4 million homes it passes. CIVH says Vuma has a market share of 39% of the FTTH market, by homes passed and connected. On an active connection basis, Vuma currently has just under 500 000 homes while Openserve has just over 400 000. This makes Openserve an exceedingly attractive asset.

Any transaction is likely to be for cash and MTN stock, and the market’s reaction – a 26% rise in Telkom’s share price on Friday – shows that the market had been undervaluing its assets.

Former Telkom CEO Sipho Maseko has long argued that there remains a lot of value trapped in the business. A second slide, this time from a Telkom results deck in 2020, shows just how much! 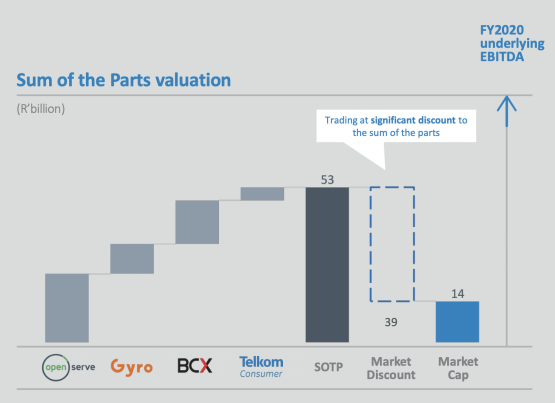 Even after Friday’s move, Telkom now has a market cap of R22 billion. That’s roughly what Maseko was arguing in 2020 that its Openserve unit was worth.

Quite how an MTN-Telkom buyout gets through Icasa and the competition authorities is anyone’s guess.

Consolidation in the mobile market is inevitable – even recently-departed Icasa chair Keabetswe Modimoeng agreed with this on Friday, telling TechCentral that markets four times the size of SA only have “two-and-a-half or three players”. This country has five (including Rain).

One could easily construct a scenario where post any buyout, BCX is unbundled and Telkom’s tower assets (Swiftnet, part of Gyro) are also separately listed (this was the plan until Russia’s invasion of Ukraine roiled global equity markets).

The rest of Telkom’s unused property portfolio could be quickly sold off. This would leave just wholesale business Openserve and Telkom Consumer (the legacy fixed-line and mobile business). If the latter becomes a sticking point for approval, one might also see this sold.

A natural buyer for the mobile book would be recapitalised Cell C (presuming Blue Label Telecoms could stretch its balance sheet further) – the prepaid bases are roughly the same quality, although Telkom’s is larger.

This could gift regulators their ‘dream’ market with three sizeable competitors. The fixed-line business may be allowed to be merged into MTN, given its precipitous decline in recent years.

Will MTN pay a premium well north of R22 billion? That remains to be seen …

In a separate Sens announcement, Telkom also revealed that former MTN CEO Mteto Nyati has been appointed to its board. Nyati’s appointment is part of a raft of changes to the Telkom board.

There is no more complicated transaction than a merger or acquisition.