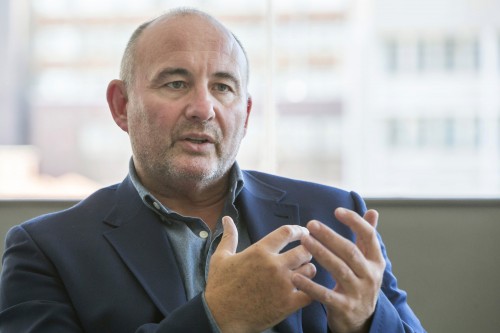 Ian Moir, chief executive officer of Woolworths, says the retailer will ride out the slump in SA and Australia by going back to retail basics of good customer service. Picture: Supplied

Staying resilient during uncertain times was once Woolworths’ hallmark, earning it the status of a darling in SA’s retail sector.

Woolworths is now facing many battles: an intensified war with its competitors via aggressive promotions for market share, SA’s ailing economy and the problem of burning cash as a result of the slow turnaround of its Australian business David Jones.

“We are in the midst of a storm of change. The customer is changing and markets are in tough places.  But we are not going to wither and die,” Woolworths’ CEO Ian Moir told Moneyweb.

Although Woolworths’ group sales grew by a marginal 3% to R74.3 billion for the year to June 2017, its clothing business underscored the extent of heightened markdowns by its peers in response to low consumer confidence and spending.

Moir sees little hope of the clothing segment turning its fortunes around for a while. “Margins will tread down for a long period of time. The next two to three years are going to be tough.”

The recovery hinges on retail basics: a better customer shopping experience and fast response to fashion. On the latter, 80% of its clothing business is ladies wear, and the retailer’s lead time on introducing new fashion is six to eight weeks versus 11 months five years ago.

Woolworths joins its peers Truworths and The Foschini Group in offering a sober outlook for the apparel segment.

“I get the sense that these retailers have been hit more by structural changes such as competition and promotional activity changes than cyclical changes like economic growth and low consumer confidence. Woolworths in its results has come short more on structural changes,” said Alec Abraham, a senior analyst at Sasfin Securities.

The food segment, a mainstay for Woolworths, is the antithesis.

Retail space grew by 4.6%, helping to lift food sales by 8.6% and like-for-like sales by 4.6%. Factoring Woolworths’ price inflation of 8.4%, sales volumes grew by a meagre 0.2% compared with a resilient 2.1% posted by its closest rival Shoprite (SA supermarket sales of 8% and product inflation of 5.9%).

On Tuesday, Shoprite CEO Pieter Engelbrecht unveiled the retailer’s plans to ramp up its exposure to higher-income consumers – a market traditionally conquered by Woolworths.

Moir is unfazed, saying Woolworths doesn’t have a monopoly in SA’s premium food space, as Engelbrecht implied. “They [Checkers] have more LSM nine to ten customers than we do, so does Pick n Pay. We just do premium really well,” Moir said. “People have tried to attack our business for a very long time. We are deeply entrenched in quality and value. We have great product developers and technology. It’s a difficult business to be in and we are far from being complacent.”

Arguably, the top priority for Woolworths is turning around its disappointing David Jones business. Since Woolworths completed its ambitious R22 billion acquisition of David Jones and sister retailer Country Road Group (CRG) in 2014 – tipped to turn it into a substantial retailer in the southern hemisphere – both businesses have been in turnaround mode.

Woolworths has sunk about A$284 million (R2.9 billion) between 2016 and 2017 to reposition David Jones and CRG by mainly replacing merchandise and financial systems that track stock availability better.

Its turnaround efforts are starting to bear fruit at CRG, which grew sales by 5.1% while comparable sales fell by 0.4%. David Jones is still the problem child, with total sales up by 1% and a decline of comparable sales by 0.7%. “The CRG performance is encouraging and indicates the new management team [led by ex-Marks and Spencer executive Scott Fyfe since this year] is fixing the business but it still has a long way to go,” said Damon Buss, an equity analyst at Electus Fund Managers.

Woolworths recently introduced a high-end food service into David Jones, opening a flagship Foodhall in Bondi Junction, located in an upmarket eastern suburb of Sydney. The store is similar to Woolworths’ model of offering food and apparel in its SA stores.

Abraham said Moir has successfully converted Woolworths’ brand equity into shareholder value. “I’m confident that he will do the same with David Jones.”

I believe I was highly critical of this company & others who believed that entering the Aus retail market would be their salvation. Unfortunately I have been proved correct (once again) no doubt much to the horror of all my critics out there. What is really scary tho’ is that this company is pinning its hopes on the outcome of the December 2017 ANC conference. I understand that there is widespread feeling that some guardian angel is about to arrive to solve ALL the nations problems. Let me clarify the situation – NOTHING WILL CHANGE – it will only get worse. JZ has everything in place for a safe & secure handover to his ex.
This is reality & for a company like Woolworths to pin its hope on an anc conference merely shows the depths to which a once fine sa company has fallen to

Do you work for Bell Pottinger?

Many predecessors, i.e. Pick ‘n Pay, Queenspark etc etc all failed. The arrogance or blind optimism of Woolworths is fascinating. They were given so many warnings. Having lost their way, they will continue to battle forth. Sell Woolies shares. The Australian spending patterns are beyond conservative.

The premium food hall of David Jones at Bondi Junction is more high end than I imagined. It is not just woolies sa food transplanted- it clearly involved a huge supplier effort. Also more of a restaurant than a food shop. It looks different and better than competition…was packed today.

I’m there every Wednesday (Bondi junction that is) – why don’t we meet for coffee & talk abt the olde country! U’ll find me on twitter under “robertinsydney”!

Mr Moir. A couple of points from this 70 year old customer. I live within waking distance of three of your stores. Firstly I have been buying ALL my clothes from W’s for nearly 50 years until recently. Now I shop around because you are no longer competitive and your quality is not what it used to be. Secondly, we buy a lot of our food from W’s but we are now finding rotten food in your perishable products, particularly fruit and veg. Under cooked bread products. Staff at the tills chatting to each other.This was unheard of in the past.

Mr Engelbrecht. Your Rondebosch store must be one that targets the typical W’S client. Do yourself a favour and visit it some time. The stench of rotting fish as you walk through the door has turned me away and I will not return. Others have expressed the same view. You cannot even start to compete with W’s if your staff are rude to indifferent, the stores stink and the layout is chaotic

Do you work for Bell Pottinger?

Woolworths is a very respectable company.
I myself own shares in Woolworths and will continue to support them.

If you are in Sydney why are you so concerned about events in South Africa?

Seems like you are not enjoying your stay in Sydney?

I have been here for just over one week, and keep tabs on SA financial news-all my money is in SA.

I am in bondi every Wednesday – more than willing to have for a cup of coffee. can tweet me on twitter using my username

lets put it this way – any day in aus (and Sydney if possible) is better than a lifetime in “soon to be junked sa”!

Woolworths results: Sales up 3%, profit down by 8%

Woolworths results: Sales up 3%, profit down by 8%