Among other things, the week that was brought about another previously unheard of accounting metric – ‘Ebitdar’.
Ann Crotty 25 May 2020  00:03

Where are the risks lurking on the JSE?
Ramaphosa warns of more job losses
Rights issues, competition issues, and a food fight
CLICK THIS COMPANY MORE COMPANY NEWS SENS
MASSMART 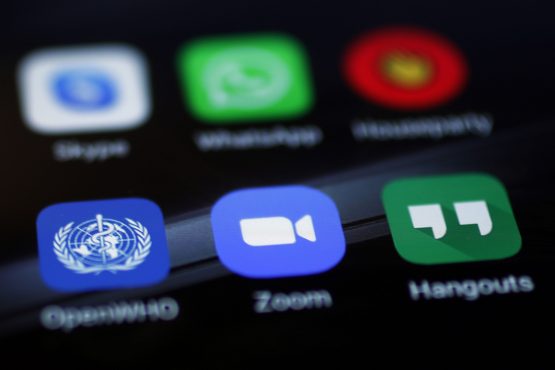 Organising a 21st Century shareholder meeting seemed too much for MTN. One of those who did get access was de-Zoomed before his question was answered. Image: Stefan Wermuth, Bloomberg

‘Covid-19 accounting’ could destroy the little that is left of the reputation of South Africa’s auditing profession.

Remember in the pre-Steinhoff, Tongaat and EOH days how the country used to score first place for auditors in the World Economic Forum (WEF) annual competitiveness survey? Cling onto that memory because in the weeks and months to come it will seem utterly implausible.

Of course, it needs to be pointed out that the WEF annual survey wasn’t a terribly vigorous piece of scientific analysis; key sections, such as those relating to audit profession and equity markets, relied heavily on opinions of players in those sectors.

Anyway, right now the old adage about never letting a good crisis go to waste appears to have been embraced enthusiastically by some of South Africa’s accountants.

Ebitda, with an extra bit

There’s no doubt Covid-19 is a crisis that has wreaked havoc across the economy but what are auditors going to do when they come across something like Ebitdac (earnings before interest, tax, depreciation, amortisation and Covid)?

Or, as in the case of Tsogo Sun Gaming, Ebitdar. The company has just warned shareholders in a trading update that it will be using this previously unheard of accounting metric when it reports its annual results at the end of this month.

Not that Ebitdar is actually a Covid issue, but what the heck.

It stands for earnings before interest, tax, depreciation, amortisation and property rentals, long-term incentives and exceptional items (which presumably includes whatever kitchen sink they might want to throw in as well). The audited presentation of this imaginative concoction is certain to be riveting.

So it’s hardly the best time for wholesale changes at the industry’s regulatory body. Not only is long-serving Independent Regulatory Board for Auditors (Irba) CEO Bernard Agulhas about to be replaced – by ex-Tongaat director Janitha John – but the majority of the board members have stepped down. Indeed, given that no new appointment letters have been issued, there is in fact no board at present.

And the best fully virtual AGM award goes to …

Also on the issue of corporate governance in the Covid-19 era, Nedbank wins last week’s award for best fully virtual AGM; not just because it all went so smoothly but because the bank made a concerted effort to ensure all stakeholders – that’s everybody including shareholders – would be able to access the meeting. In addition to the AGM notice in the Integrated Report, Nedbank issued a Sens statement explaining the process, which being new can be daunting.

Massmart’s AGM was okay but would have been a lot better with visuals and wasn’t easy for guests to access.

But the standout underperformer was fortress MTN. What were they thinking relying on the legal nicety that as only shareholders have rights at shareholder meetings, everyone else can be excluded? How 20th Century.

Of course this is a group in turmoil, with lots of churn at top management level and legal battles in the US about protection payments to the Taliban.

So organising a 21st Century shareholders’ meeting might have been just too much for them – perhaps more fumbling than fortress. One shareholder who did get access was de-Zoomed before he could get a reply to his question about pricing of 500 megabyte bundles.

No doubt the weak rand flattered the Marikana contribution but analysts are encouraged by the progress made in integrating the operation since Sibanye bought it for a paltry 60 pence a share last year. “It’s only beginning to warm up,” remarked one analyst in reference to prospects for Marikana under the new management.

It does seem government is incapable of feeling much embarrassment about anything these days but the seemingly smooth process Comair is going through does highlight the utter destructive chaos of the SAA situation.

Meanwhile, tensions between the US and China are mounting by the day

Last week’s decision by the US Senate to pass the ‘Holding Foreign Companies Accountable Bill’ could prevent many Chinese companies from listing on US exchanges or raising money from American investors if it is passed in the House of Representatives.

According to US media reports, the bill, if enacted, would require Chinese (and all foreign) companies to establish they are not owned or controlled by a foreign government. In addition, companies would be required to submit to an audit that can be reviewed by the Public Company Accounting Oversight Board, which oversees audits of all US companies that seek to raise money in public markets.

To date, China has refused to allow this sort of interrogation of Chinese companies by the US.

Tencent isn’t directly impacted by the proposed legislation but can it be much longer before the US government looks at discouraging US investment in Chinese companies regardless of where they are listed? Critics say too many powerful Wall Street entities are making too much money on Chinese companies to ensure the bill is passed in the House of Representatives but these days Democrats and Republicans seem to be competing to sound more hostile on China.

And finally, to the big question: was former Steinhoff chair Heather Sonn pushed – or did she jump?

Read: Heather Sonn’s resignation may have been ‘a way out’

Certainly, the Sens statement seemed designed not to shed any light on the matter. It read as though three different people had sent through separate paragraphs that were stapled together unseen. Of course, as we know by now, with Steinhoff anything is possible.

The JSE doesn’t deserve its Licence. When times where good they could not detect irregularities and now that times are tough the level of irresponsible and irregular accoutnig is just going to increase.

EBITDA – although it has earnings in the acronym – is not actually an earnings number but an indication of operating cash flow. It is not a standardised IRFS measure, and companies are free to disclose this indication as they see appropriate. Similarly, analsysts are free to calculate this number as they deem most relevant.

Seems rather strange that, as a CA(SA) and a financial journalist, Ann Crotty doesn’t seem to understand that EBITDA, or any of its many derivatives, is classified as a non-IFRS earnings measure and would never be reported on by an auditor in audited financial statements. Companies are free to make up any earnings measure they want but these don’t form part of the financial statements. Companies have been doing so for as long as money has been made.

EBITDA – seems a bit dodgy.
In the US the SEC issue very good guidance , it advised companies there is no need to Normalize your EPS for covid.
There is no normal…this is the world we live in it affects all of us, so show it as normal earnings.

Also how do you measure loss if volume…for example if your budget was a 1000 units, and you know 700 is secured , and the 300 was always a stretch target.
Now in covid you only sell 400, and you disclose 600 loss of volume as covid impact….non sense

Standout under-performer MTN?
Probably ran out of data for a Zoom meeting with more people…