An exact date cannot be confirmed but work is progressing on safety fixes to the aircraft, FAA says.
Richard Weiss, Bloomberg  /  12 June 2019 13:39
8 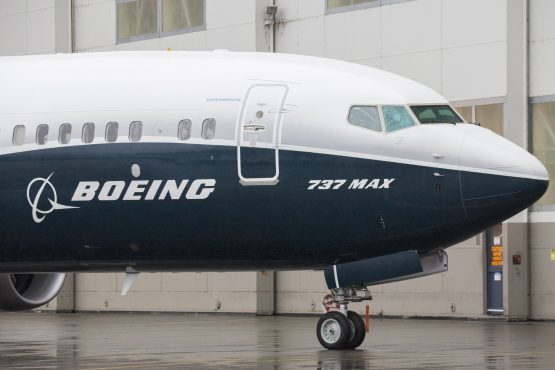 FAA says they are under pressure but the aircraft will be returned to service. Picture: David Ryder, Bloomberg

Boeing’s 737 Max aircraft, grounded since March after two fatal crashes in five months, will be back in the air by December, according to a top Federal Aviation Administration safety official.

Read: Boeing’s 737 MAX back in spotlight after second fatal cra

It’s not possible to give an exact date as work progresses on safety fixes to the aircraft, Ali Bahrami, the US regulator’s associate administrator for aviation safety, said Wednesday in interview at an aviation safety conference in Cologne, Germany. While the FAA is “under a lot of pressure,” he said the Max will be returned to service “when we believe it will be safe.”

Knowing when the aircraft may return to service would help airlines contend with the disruption caused by the grounding of the narrow-body Max, Boeing’s most popular model. The FAA has said that there’s no time frame to sign off on Boeing’s proposed software fix for the jet.

When the crashes were reported in the Financial Times, the commentators, many of whom had expert knowledge on the subject, were of the opinion the the entire wing structure needs to be redesigned and that the engines are far too large in relation to the wings. This is why there is a computer assisted function in the takeoff mode.

Many of them vowed never to fly on one of these.

Hopefully by December, BOEING would’ve reverted back to improved engine placement, exactly in the same position as it was in the B737 ‘NG’ series (800) 😉 But the CFM-56 turbines are less efficient than the new LEAP turbines, and less powerful.

Why was it not possible just to design a slightly smaller & lighter LEAP engine from the outset? (with the same exterior cowling dimensions as the older engines…with same power…but just more efficient).

Then no dirty software tricks will be required to maintain centre of gravity , and angle of attack.

‘from the outset …’. That is history. The configuration was done and flight tested, and 100s of planes are on the orderbook. That is the dilemma

Boeing’s decision was based on profits (while competition from Airbus blowing hot air down their necks). Instead of going for a brand new design for their single-isle market, which would’ve had great development costs…and then typical delays may’ve caused Airbus to be in front in that market segment (for a while)….instead Boeing decided to get maximum use (profit) out of the existing frame, by stretching the design too far.

In this way, no new pilot training would’ve been required (as opposed to in a new design), which would costed airlines extra money in training….making Airbus A320 Neo a more attractive option.

(As an air crash investigator sadly put it: “…you know when you have taken an aircraft design too far, is when you find debris on the ground like today” 🙁

In car speak…so instead of allowing the previous generation VW Polo to be the new “Citi Golf”….just imagine VW continue developing the Golf-1 generation to its MAX? 😉 It may end up with undesirable handling characteristics with all the extra weight of stressed chassis…and too large engine up front.

Wonder would have happened if hauwei and boeing were intertwined via each others products – would have been a nice excuse for the usa boycotting china now – but in this case boeing is standing all alone, can’t point fingers other than themselves – the direct result of monetary greediness . The ironical part about this is that the self-confessed mistake /slip up made by boeing with their 737max is not as nearly emphasized by the self inflated usa government as hauwei’s possible, but not proven, security risk. The 737max slip up already cost people’s lifes.

I read somewhere on a tech site, that with Huawei’s 5G global network rollout, they refused to allow the USA’ National Security Agency (NSA) a hackable backdoor.

(The NSA is a spy agency, responsible for a huge share of global malware that is written. The good guys…or are they?) They spy also on friendly nations, besides spying on China, Russia, North Korea. Interestingly, CISCO Systems was found spying on behalf of US govt.

So this would’ve meant if the whole of US would operate on Huawei’s 5G network, their our NSA may find it difficult to spy on their own US citizens, and others. This would’ve been a huge issue….”Sorry Huawei, we don’t want you in the US. Out you go!”

For those readers further interested in the B-737 MAX saga, and the plane’s development, the following article as a fairly balanced read in my opinion: