Listed businesses are using shares to buy out other companies and reward staff and shareholders rather than expand their operations.
By Larry Claasen 9 Oct 2020  00:01

‘We have stunning value in our equity and bond market’ – Karl Leinberger
Even passive requires an active choice
The JSE in 2021: What seven asset managers expect
CLICK THIS COMPANY MORE COMPANY NEWS SENS
QUILTER The JSE might not be seen as a way to source capital, but using shares as a means of payment in lieu of cash has worked out well for investors. Image: Waldo Swiegers, Bloomberg

Over the last 20 years, the JSE has become more of a way for big companies to unbundle non-core assets and offer staff incentives rather than fund initial public offerings (IPOs) or grow their operations.

This can be seen in the number of listed companies having almost halved from 612 to 342 in the two-decade period.

Another indication of this trend can be seen in figures derived from the South African Reserve Bank (Sarb) quarterly bulletins. They show that ‘other share capital’ raised of R1.5 trillion dwarfed the less than R292 billion raised through rights issues from the beginning of 2000 to the end of August 2020 by a factor of over five. 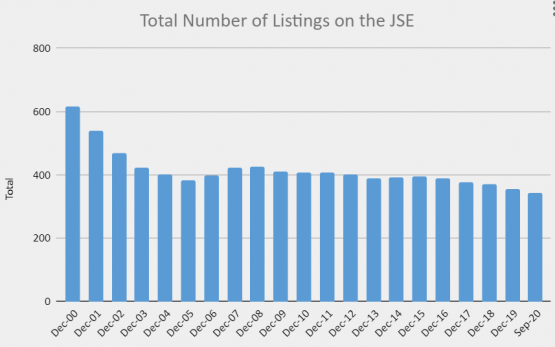 Other share capital raised includes other methods of issuing shares on the JSE, namely: From these figures, the primary use of the JSE is for already listed business to use shares instead of cash to buy out other companies and to reward staff and shareholders, rather than funding IPOs or the issuing of new shares to fund the business.

Though the JSE might not be seen as a way to source capital, using shares as a means of payment in lieu of cash has still worked out well for investors.

In contrast, the value of shares had risen nine and a half fold from just shy of R537 billion to R5.14 trillion over the same period.

The high watermark for capital raising on the JSE was 2015 when about R250 billion was raised. Back then, it saw 12 companies like Sygnia, Balwin Properties and Capital Appreciation listing.

Since then, however, there has been a steady decline in the number of new listings and money raised. By comparison, only R35.8 billion was raised in 2019. The last time capital raising was at that level was in 2004.

This year however looks better as it has already matched that figure. “Equity capital raised by companies listed on the JSE in the domestic and international primary share markets of R35.6 billion in the eight months to August 2020 was 25.3% more than in the corresponding period of 2019,” according to the 2020 Second Quarterly Bulletin.

This rise is in large part a response to the Covid-19 crisis, as several companies like TFG, Mr Price and Stor-Age have all gone to the market to raise capital.

The largest single contribution came from equity funding of R7.6 billion in June by mining company through a general issue of shares for cash to partly fund the construction of a new copper-concentrating facility in Zambia, according to the bulletin.

Even so, the extent of the falloff in the JSE being a source of capital can be seen in the PwC African Capital Markets Watch 2019 noting that there were no IPOs on the exchange last year.

Not the whole picture

The figures provided by the Sarb’s bulletins don’t tell the whole story as they do not touch on unbundlings, where a company lists a subsidiary by giving it to their shareholders.

The JSE says in a statement: “Rights offer is a capital raising corporate action where a listed company raises money from existing shareholders on a subscription basis. On the other hand, unbundling is when a listed company lists one of its businesses as a separate listed entity. It’s a distribution of assets to shareholders and shareholders get a stake of an asset in new listco.”

In other words, an unbundled company is a new listing but not necessarily ‘new’ capital, as shareholders did not pay anything for their holdings.

The distinction can be seen in Old Mutual’s 2018 R43.2 billion unbundling, which resulted in its shareholders getting a direct stake in Nedbank and, Quilter plc and US-based BrightSphere Investment Group.

Despite the size of this transaction, it did not show up in the capital raised figures.

In contrast, rival Sanlam’s rights issue in March 2018 of R5.7 billion to pay for its takeover of a Moroccan company, SAHAM Finances, was one of the biggest drivers of capital raising over the period.

Could it be that the time has come to reign in loose exchange control.

The best exchange control is confidence in the economy.

Many listed companies are investing (and loosing money) offshore because they have no faith in the future of a country run by a Marxist, business-hostile, racist and corrupt bunch of ignorant fanatics.

The main purpose of exchange control is to restore the balance of payments equilibrium, by allowing the imports only when they are necessary in the interest of the country and thus limiting the demands for foreign exchange up to the available resources.
We need less controls and red tape to grow the economy.

Exchange Control is unfortunately a necessary evil. A plethora of countries used it in the past to protect their industries and economies. Globalization and exchange control have not sorted out their differences yet.

The financial market crisis in 2008 clearly indicated that you cannot allow steady capital inflow over long periods, but then allow a wall of money to leave ”overnight” during a market crisis. Russia in 2008 had a ”hole in the wall” that will take decades to heel!

Grow at 10% a year and you dont need exchange controls..The latter is for failing states

SA is likely to miss economic growth forecast for 2021

SA is likely to miss economic growth forecast for 2021