Car exports are racing to a record in South Africa South Africa's vehicle exports increased on the back of investor confidence in the local industry and its products, technology and services, Naamsa's CEO says. Image: Waldo Swiegers, Bloomberg

Vehicle exports from South Africa, the continent’s largest automaker, could reach a record R140 billion in 2019, partially offsetting a drop in domestic sales.

The value of car shipments was R127.5 billion in 2018 when the industry exported just over 351 000 vehicles. The country is expected to ship around 388 000 units this year as assemblers including Ford Motor ramp up production, according to Renai Moothilal, executive director of the Automotive Industry Export Council and chairman of the National Association of Automotive Component and Allied Manufacturers.

Almost 19% more vehicles were exported in the nine months through September, compared with the previous year, data from the National Association of Automobile Manufacturers of South Africa show. Vehicles, ranging from passenger cars to trucks and buses were shipped to 155 countries in 2018, up from 149 in the previous year. Daimler’s Mercedes-Benz C Class set the pace for passenger car and light commercial vehicle shipments, with more than 90% of locally produced models destined for export, said Mike Mabasa, chief executive officer of Naamsa.

The export volumes are a show of investor confidence in the local industry and its quality of service, products and technology, he said. Exports were also boosted by the country’s Automotive Production and Development Programme, which has built a good base for assembly and allowed for high volume production, and supportive trade policies, Moothilal said. With the UK and US are among the top buyers of South African-produced cars, there are concerns about the impact of Brexit and the 2025 expiration of the African Growth & Opportunity Act, which provides Sub-Saharan African countries duty-free access to the US.

Trade and Industry Minister Ebrahim Patel told an industry meeting in August that his department would do “everything in its power” to ensure that negotiations, which have a direct impact on industrial policy, yield positive outcomes, Mabasa said. The transport industry, which accounts for 14% of South Africa’s export value, is the largest component of the country’s manufacturing sector and provides more than 100 000 skilled jobs. 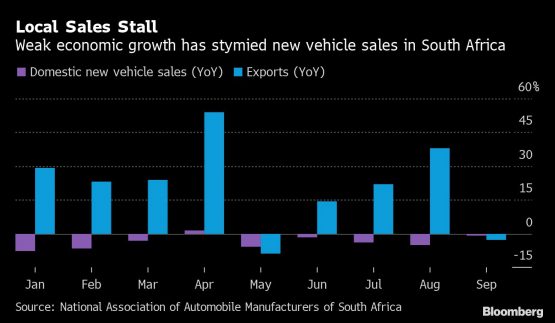 Upbeat export prospects also offer some respite as domestic sales continue to decline. The number of new cars sold locally has fallen in four of the past five years as the economy failed to expand by more 2% annually.

That pattern is likely to continue this year despite below-inflation price increases and aggressive discounting by retailers. Data from credit bureau TransUnion show price increases have remained below consumer-price growth for two years — the longest period of below-inflation increases since record keeping began almost two decades ago. A deterioration in consumer spending power has seen finance houses fund 2.16 used vehicles for every new vehicle and there’s been a marked shift to purchases below R200 000, said Kriben Reddy, head of auto at TransUnion Africa.

It is a real pity that we don’t get the relevant information in an article like this. I do realize that this is an article from Bloomberg, but Moneyweb owes us, readers, some discussion of the privileges and special treatments that enable the auto manufacturers to be competitive on the export market.

They enjoy a 30% tariff protection that will make Trump’s combover turn green with envy. They receive subsidies from the government that basically bribe automakers to employ locals. Then, as far as I know, they are exempt from BEE requirements. The most dilapidated spaza shop in the country can be internationally competitive under these circumstances.

yawn does everything has to be negative

Facts are non-emotional. Emotions are generated by a person according to his personal perceptions and world view. If you experience the statement as negative, it says everything about yourself and nothing about the statement.

The point is my post is this – If the auto industry is so successful without any BEE requirements and with the special privileges of tariff protection and subsidies, then why doesn’t the government simply implement these measures in all spheres of the economy? They can create millions of jobs overnight. Do they intentionally plan for the other industries to fail? If the recipe works, why not copy and paste it?

I will appreciate your intellectual contribution, but if you want to keep on yawning, that is also fine with me.

mentioning that this industry has the third biggest tax break after VAT exempt food and pensions is hardly a big ask.

TBOS: I much prefer to live by negative but TRUE comment than positive but UNTRUE or no comment at all. To me, the comments from readers greatly add to the good value of MONEYWEB.

Considering whether the trade barriers that artificially prop up our local auto industry at the expense of all other industries (bar the supply chain to the auto industry) is not “negative” or “disloyal”. It is an essential question to ask. The padded cost of vehicles arising from this regime is a hidden tax on every one of us, and on almost everything we buy, since everything is transported by road. Who has done the maths to understand whether the country as a whole would not be better off with cheaper vehicles all imported from countries that are efficient at their production and that can stand on their own feet without rampant protectionism? We would lose 100,000 jobs and a big industry, certainly, but who is to say that throwing off these shackles wouldn’t lead to compensatory growth elsewhere?

Yr whole argument is emotional regardless of what you state

This is possibly the weakest response I have ever seen. Embarrassing.

Which car makes/models do they export to the US and UK?

UK gets all C series Mercs on Ro Ro East london to Bristol.

USA ?? Good Question (putting steering wheels on the Left a bit beyond our unionised Labour ).

USA gets VW GOLF, and no one puts the steering wheel anywhere it is all done buy a programmed assembly line.