China’s economy continued to slow at the start of the year, with manufacturing output slipping and Covid-19 outbreaks curbing consumer spending.

The official purchasing managers’ surveys released on Sunday showed a moderation in factory production and services in January. Small businesses bore the brunt of the pain, with a separate private index dropping to its lowest in almost two years. 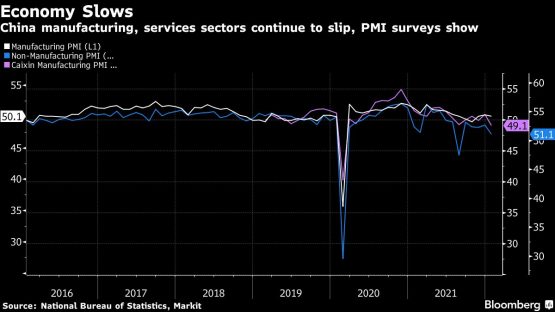 The disruptions add to the woes facing the Chinese economy, with home sales falling and consumption sluggish due to tightened restrictions to contain the spread of the highly-contagious omicron virus variant. Beijing is seeking to stabilise the economy ahead of a key political leadership meeting later this year, with the central bank already cutting interest rates and officials pledging more fiscal support.

“The weak PMI indicates the policy easing measures from the government have not yet been passed to the real economy,” Zhiwei Zhang, chief economist at Pinpoint Asset Management, wrote in a note. “We expect the government will step up policy support in coming months, particularly through more fiscal spending.”

The official manufacturing purchasing managers’ index declined to 50.1, the National Bureau of Statistics said Sunday, remaining slightly above the 50-mark that separates expansion from contraction. The non-manufacturing gauge, which measures activity in the construction and services sectors, fell to 51.1.

Looking ahead, we expect downward pressures on the economy to persist in the near term, with restrained celebrations around the Lunar New Year holiday dragging on consumption, while production remains in low gear. The authorities have made a sharp pivot to increase policy support. This should cushion the slowdown but the impact may not be discernible until late in the first quarter, after LNY-related distortions in activity have subsided. – Chang Shu, chief Asia economist

The PMI gauge of small companies dropped to 46 this month, the lowest since February 2020 and taking a contracting streak to a ninth month.

That was echoed by the Caixin Manufacturing Purchasing Managers’ Index, also released on Sunday, which fell to 49.1, the worst in almost two years. The private survey focuses on smaller, export-oriented firms compared with the official manufacturing PMI.

Chinese factories often see a production lull in January and February as workers head home for the Lunar New Year holidays. Activity has also been affected this year by the government’s orders for steel plants to trim output to reduce air pollution ahead of the Winter Olympics in Beijing which begin Friday.

Travel restrictions and lockdowns in some places are curbing spending on services, with the PMI sub-index for the sector dropping sharply to 50.3, the lowest since August. Residents in places where there have been recent Covid-19 outbreaks, including Beijing, Shanghai and the northern port city of Tianjin, have been urged to not leave the cities unless necessary.

Manufacturers were also squeezed by higher costs in January, with input prices rising at the fastest rate in three months, according to the official PMI data.

“That could drive the producer price index up and narrow the room for monetary policy,” said Bruce Pang of China Renaissance Securities Hong Kong.

Construction activity continued to cool this month, with the sub-index falling to 55.4, NBS figures show, suggesting sentiment remained subdued given the property downturn and the limited effect that government spending on infrastructure is having so far. The approaching holiday and cold winter may have also had some impact on building.

Other key highlights from the PMI data:

Sub-index for manufacturing jobs fell to 48.9; non-manufacturing employment slid to 46.9
Price pressures on manufacturers grew in the month with input and output prices higher