To aid the economy’s recovery after a sharp downturn in recent months fueled by a property slump.
By Bloomberg News 22 Nov 2021  08:46 In its latest quarterly monetary policy report published Friday, the People’s Bank of China removed from its policy outlook a few key phrases cited in previous reports, including sticking with “normal monetary policy.” 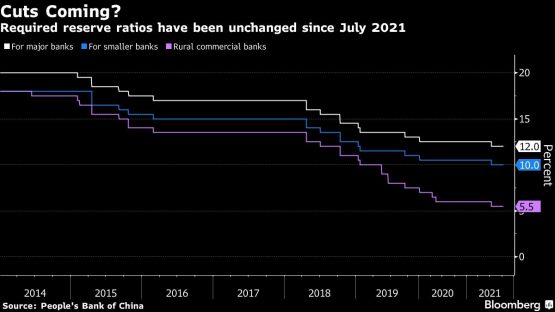 The report dropped previous phrases to “control the valve on money supply” and vowing not to “flood the economy with stimulus,” signaling more credit support in coming months.

“We expect Beijing to soon significantly step up its monetary easing and fiscal stimulus to counteract the increasing downward pressure,” Nomura’s Lu Ting wrote in a Sunday note.

The PBOC’s more dovish outlook follows growing concerns about the economy flagged by several officials recently. Premier Li Keqiang told a seminar on Friday that China still faces “many challenges” in keeping the economy stable, although this year’s goals will likely be achieved.

Liu Shijin, who sits on the central bank’s monetary policy committee, said in an online forum Sunday that the economy could enter a period of “quasi-stagflation,” which needs close attention if it happens.

“The concern for growth slowdown is clearly rising among technocrats at different government agencies,” said Macquarie Group Ltd.’s Larry Hu. “But the key is whether the top leaders share such a view.” The Politburo meeting in December and Communist Party’s Central Economic Work Conference due in the same month, will provide more clues, he said.

Growth could weaken to below 5% next year, according to some forecasts, testing authorities’ resolve to cut the economy’s reliance on the highly-leveraged property sector. In the quarterly report, the PBOC said the economic recovery faces restrictions from “temporary, structural and cyclical factors,” and it’s become more difficult to maintain a stable economy.

While investors’ expectation for near-term monetary easing is low, our view is that the People’s Bank of China needs to take action to cushion the economy’s slowdown. We maintain our call for a 50-basis-point cut in banks’ required reserve ratio in the coming months.

Any easing steps would likely be targeted toward small businesses and green finance, according to economists, similar to measures the PBOC has already taken in recent weeks, including 200 billion yuan ($31 billion) of financing for coal projects announced last week. It’s also likely to allow credit growth to accelerate next year, according to Guotai Junan Holdings Ltd. analysts led by Qin Han.

Goldman Sachs’ Hui Shan and colleagues said policy interest rates would likely remain unchanged, while Nomura’s Lu said the chance of a reduction in the reserve requirement ratio will rise in coming months.

The PBOC’s report also addressed a number of other factors:

The central bank reiterated it won’t use the property market to stimulate growth, adding that it will work with local governments to maintain the “stable and healthy development” of the market and protect consumers’ rights.

There are signs Beijing is becoming more uncomfortable with the rally in the yuan, the best performer in emerging markets this year, with warnings to banks to cap speculation in the foreign exchange market.

In its quarterly report, the PBOC said it will better manage market expectations, help small businesses improve risk management and develop the offshore yuan market. The PBOC may gradually allow a more flexible currency, Xie said in a report Monday.

The PBOC said the normalization of monetary policy in overseas countries, including the U.S., will have limited impact on China, partly because of its cross-cyclical policies and increasing flexibility in the exchange rate. The central bank will continue to base its policy on domestic conditions and strengthen its autonomy, it said.

The PBOC reiterated that inflation pressures are controllable overall. China is a major producer in the world with relatively high self-sufficiency, and this will help it cope with the global commodities surge and rising inflation overseas, according to the report.