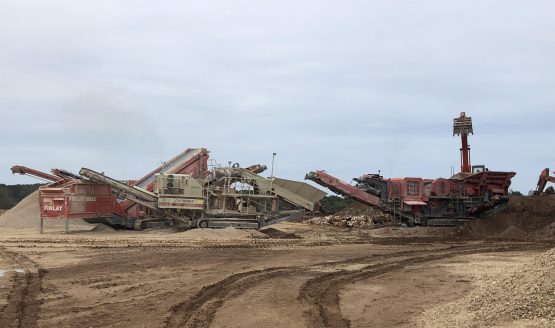 With 12.6m more people in SA than 15 years ago, construction activity should’ve seen the sector grow at least in line with GDP, but it hasn’t. Image: Supplied

The Afrimat Construction Index, a composite index of the level of activity within the building and construction sectors, plunged to a record low in the first quarter of this year despite the lockdown not yet having any impact on the industry in the quarter.

Economist Roelof Botha, who compiles the index for Afrimat, said on Thursday that it dropped below 100 for the first time since compilation of the index began – to 97.

“This is frightening, especially considering there was a 33% improvement in construction activity between the first quarter of 2011 and the fourth quarter of 2016,” he said.

Botha added there is generally always a spike in the index in the fourth quarter each year as contractors rush to complete projects before the builders’ year-end shutdown in mid-December.

However, he said the 114.3 index level in the fourth quarter of last year was even worse than the second quarter index level.

“There is a clear downward trend in activity. The fourth quarter average, which takes out all the seasonality, clearly tells you this sector is in trouble,” he said.

Botha said the value of building plans passed, which is a leading indicator, dropped by 25.9% between the first quarter of 2019 and the same quarter this year.

The lack of construction work over several years has decimated South Africa’s listed construction sector. Group Five and Esor, which are both in business rescue, had their listings removed from the JSE last month.

Group Five will cease to exist with all its assets due to be sold while Esor’s future is uncertain.

Basil Read has also been in business rescue since June 2018, Stefanutti Stocks is experiencing financial difficulty, both Aveng and Murray & Roberts sold their Southern African construction and engineering businesses, and Calgro M3 has decided to close its construction division.

Botha anticipates that the index will decline further in the second quarter this year to another record low before “taking off like a rocket” because of lower interest rates and the government’s post Covid-19 infrastructure-led economic growth recovery plan.

Andries van Heerden, CEO of JSE-listed Afrimat, said although the index results are down, he is heartened by the steps being taken by the government in terms of the proposed expenditure on infrastructure.

Van Heerden added the assurance given by Kgosientsho Ramokgopa, head of the South African Presidency’s investment and infrastructure office, that commitments of tens of billions of rands have already been received for some of these projects “is good news”.

“This bodes well for companies involved in infrastructure development and throughout the supply chain, particularly the construction sector, and our hope is that this can bring about some recovery and help reduce unemployment levels,” he said.

Ramokgopa made the comments about finance institutions having made firm commitments running into “tens of billions of rand” for a host of planned infrastructure projects in South Africa during the inaugural Sustainable Infrastructure Development Symposium of South Africa (Sidssa) on June 23.

He said this is money that will be coming into the country, which means the government is not relying on the fiscus to ensure that it’s able to get these projects going.

Ramokgopa said the commitments were made at a “pitching session” in late May, where government unveiled 93 projects to an audience of 60 financing institutions represented by more than 210 delegates.

The South African cement industry, represented by The Concrete Institute (TCI), on Wednesday welcomed the outcomes of the Sidssa and the recognition by President Cyril Ramaphosa that infrastructure build is of critical importance to South Africa’s economic recovery.

Time for words to make way for action

TCI MD Bryan Perrie said that while the cement industry is highly encouraged by the symposium and looks forward to partnering with the government, the time is now ripe to turn words and policies into actionable and investable projects as identified in the “new infrastructure pipeline”.

The government showcased 276 projects at Sidssa, 88 of which are at post-feasibility stage and ready for financial investment. It indicated the Sidssa projects that will be gazetted have been selected from an initial 177 that underwent a rigorous due diligence process.

However, SA Forum of Consulting Engineering Contractors CEO Webster Mfebe confirmed on Thursday that the gazetting of these projects has not yet happened.

Mfebe said a lot of work was done on the platform of the Public Private Growth Initiative (PPGI), with all the economic sectors submitting projects that went through a process of being selected as catalytic projects.

Protect and respect ‘spirit of cooperation’

“It will make a mockery of the PPGI if the projects that are announced are only the mundane, pedestrian government projects without the involvement of projects proposed by the private sector in order to get the economy going. It will kill the spirit of cooperation and trust established through that process,” he said.

Metelerkamp said this marks the seventh consecutive quarter of decline for the industry.

“In fact, if we excluded a 1.5% expansion in the second quarter of 2018, the construction industry would have seen a staggering 13 consecutive quarters of decline.

“This is certainly expected to continue, as our forecasts show the construction industry contracting in the region of 18-22% this year based on various scenarios.”

Well,Cyril’s brother in law Patrice owns a big share in Afrimat.Can’t help you with government contracts?

Yep, its not what u know, but who u know.I might get a job if i tjommie-up with cyril.

Government cannot get their ducks in a row for school re-opening dates. The president announces tobacco to be allowed again, gets overruled by minister. Billions of rands tax revenue shrinkage. Fiscal expenditures include numerous unforeseens e g TERS, protective materials for school, rocketing (supposed to anyway) hospital and other medical support costs… (and besides, there is an indulgence to reinstate a national airline to be funded, not to mention Eskom): infrastructure projects in itself even before lockdown long talk, no walk. Afrimat CEO does what CEO’s should do, to talk the market up, but the sceptiscism from consultants and contractors in general alike is unusual but valid. “Assurances” and “ANC government” are not compatible concepts.

South Africa has a very good Destruction industry managed superbly by the ANC .