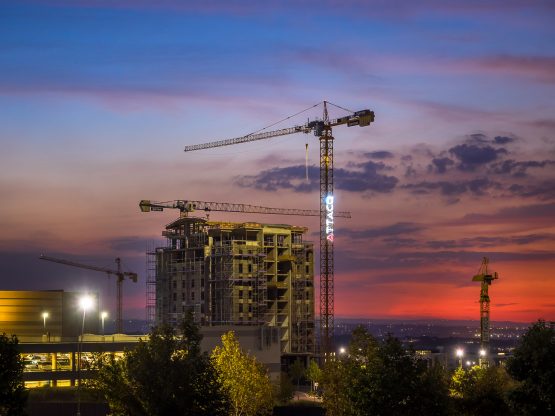 Addressing infrastructure deficiencies will remain a priority of the government for many years to come, which bodes well for the sector. Image: Supplied

The construction industry continued its slow recovery from the impact of the Covid-19 pandemic in the third quarter of 2021, according to the latest Afrimat Construction Index (ACI).

Economist Roelof Botha said on Thursday that in line with several key indicators of construction activity, the index has staged a swift recovery from the Covid-19 induced slump that occurred during the second quarter of 2020.

Botha, who compiles the index which is a composite index of the level of activity within the building and construction sectors, said the index increased by 60% in the third quarter of 2020 but progress since then has been muted, with a year-on-year improvement of 4.5%.

However, Botha stressed it is encouraging the index has managed to record a quarter-on-quarter rate of increase of 2.8% for the third quarter when several sectors of the economy were under severe pressure because of the July unrest in parts of KwaZulu-Natal and Gauteng.

Botha highlighted that only three of the nine constituent indicators that comprise the index – wholesale construction trade (-0.7%), employment in construction (-5.3%) and value of building plans passed (-7.5%) – recorded negative outcomes in the third quarter compared to the second quarter.

“The year-on-year performance was even more impressive, with eight of the nine indicators recording positive growth rates,” he said.

The latest index results are at odds with the FNB-Bureau for Economic Research (BER) civil confidence index released this week.

That index dropped by two points on a 100-point scale to 15 in the fourth quarter despite most of the underlying indicators, such as activity and profitability, improving in the quarter.

However, the FNB/BER index is more focused on sentiment.

Delays in awarding infrastructure projects are believed to be responsible for civil construction industry confidence deteriorating in the quarter.

The FNB-BER building confidence index released last week declined by one index point to 34 in the fourth quarter, with three of the six sub-sectors registering higher confidence in the quarter.

Driven by an increase in building activity and profitability, the confidence of main building contractors improved significantly in the quarter of 2021 to register the single biggest quarterly improvement since the 1980s.

Botha is confident the current momentum of recovery in construction can continue into 2022.

“Further recovery of the construction sector is on the cards for next year,” he said.

Botha based this optimism on the presence of a number of growth drivers, including:

Botha believes the decline in building plans passed is related to the disruption caused by the unrest and protests in July and expressed confidence it will increase.

“But it will have a dampening impact in future because if you don’t hand in the plans today, nothing happens tomorrow,” he said.

He does not believe Statistics South Africa is recording the significant building activity taking place in these areas.

Botha bases this on the financial performance of retail and trade sales of hardware, which was the second best performer in the third quarter.

“That gives me hope,” he said.

Increase in alterations and additions

Botha said an interesting feature of the latest building statistics is the increase in the share of alterations and additions, which had averaged 15% in 2019 but increased to more than 20% during 2021, with a new quarterly record high of almost 29% during the third quarter of 2021.

He said it was also heartening to be informed in November 2021 by new Minister of Finance Enoch Godongwana that an additional 55 projects valued at almost R600 billion had been added to the pipeline of infrastructure projects, with the telecommunication, transport and water and sanitation sectors prioritised in the short term.

Botha does not believe the government has a financing headache in regard to its infrastructure investment plan.

“In the last two fiscal years, government had a R130 billion tax revenue overrun. That is an unbelievable figure.

“I think government has enough money. For the first bunch of infrastructure projects of R340 billion, the funding is already in place.

“Construction is the most labour intensive sector of the economy. For every job you create, you immediately broaden the tax base,” he said.

In his Medium Term Budget Policy Statement (MTBPS), Godongwana referred to the 65 priority infrastructure projects valued at R340 billion that were gazetted in 2020 and the additional 55 new projects from various sectors valued at R441 billion.

However, the R441 billion cited by Godongwana in the MTBPS differs from the stated R595 billion value of these projects when the second tranche of projects was announced in October 2021.

Botha conceded there is “a huge funding gap” for these second tranche projects but is encouraged by the invitation to the private sector to “come to the party and get involved”.

“We do remain cautiously optimistic that additional momentum will come to the fore during the course of 2022, driven by the much anticipated infrastructure projects,” he said.