A question surfaced on Wednesday, following government’s new dispensation for e-tolls announced by Deputy President Cyril Ramaphosa. If you slice e-toll tariffs in half, the portion of revenue spent on collecting that revenue will surely increase and render the system even more inefficient than it already is?

She points out that service provider ETC, subsidiary of Austrian company Kapsch, does not earn a percentage of revenue, but is paid for every action it performs – be it responding to queries in its call centre, sending an invoice or letter of demand or preparing a summons.

At the moment Mulder says, the cost of collection is around 17%.

She says from a revenue point of view the revised tariffs will have a limited impact on Sanral. People who regularly pay will continue to pay the same tariffs (30c/km for light motor vehicles). The biggest impact would be the 30 free gantry passes for infrequent users and the lower monthly cap of R225 instead of R450 (light motor vehicles).

This has a total impact of R380 million per year that will be covered jointly by national and provincial government.

She says the 60% reduction in historically outstanding e-tolls will result in road users paying 70c/km, instead of the earlier R1.74. These higher amounts were however not included in expected revenue.

The scrapping of punitive alternate tariffs for late payers will reduce the amounts owed from R1.74/km to 30c/km, but after 30 days the amounts will still double to 60c/km, providing sufficiently for the higher cost of collection of amounts in arrears.

Sanral will now request a cost estimate from ETC for changes to the e-toll system to incorporate the new measures, the biggest system change being the provision for 30 free gantry passes per year for infrequent users.

She says the simplification of the system may even lead to reduced cost, as will the addition of other payment channels like the Post Office and municipal licensing offices.

Mulder explains that consumers already pay a service fee to the Post Office and licensing offices for transactions they handle. That will also be the case regarding e-toll payments. These transactions will therefore not incur charges from ETC.

The Department of Transport will embark on a Fica-like process to update vehicle and driver details in the eNatis database from October. Road users who provide e-mail addresses will thereafter receive their e-toll invoices electronically, which will further save Sanral printing and posting costs, Mulder said.

She said Sanral expects the recovery of outstanding e-tolls to take no more than two years. This is based on the assumption that it may take a year to finalise the new measures and a further year for road users to pay off their debt.

Mulder said road users who are not able to repay the outstanding amounts within the prescribed six months, will be allowed to make payment arrangements with Sanral.

She couldn’t put a total number to the arrears, since the auditors are still finalising the financial statements for 2014/15 financial year. She earlier told Moneyweb the shortfall amounted to R588 million for the financial year until the end of February (year-end March 31).

National Treasury has relaxed the annual cap on Sanral’s drawdown from its R31 billion guarantee and will provide bridging finance of R266 million to assist the agency through these two years, Mulder said.

In the meantime Sanral is crunching the new numbers in accordance with the measures that were announced, to amend its earlier application to National Treasury to lift its debt ceiling in light of the lower-than-expected e-toll revenue and failed bond auctions earlier this year.

Mulder is hopeful that Sanral will be able to roll over the short-term debt of R2 billion payable in September and R2.8 billion payable in April next year. She says indications are that investors are open to extending the loans by a further 24 months at acceptable rates.

In the long run, Sanral hopes that the new dispensation will ensure higher e-toll compliance levels and put its toll portfolio back on a sustainable track.

E-toll collections vs projections until February 2015 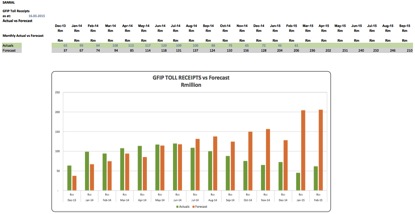 If that is the case – the customer was to be ripped off from the start !

“This has a total impact of R380 million per year that will be covered jointly by national and provincial government”.
No it won’t. It will be covered by increases in taxes on the whole population and increases in rates for property owners in Gauteng. Yet another case of one-sided income statement and balance sheet thinking.

Who would believe saral in anything it spouts?

Well if the Austrians charge for each action, and revenue drops, then collection cost as a % of revenue increases. Even the current level of 17% is outrageous.

Sanral’s plan to solve the tax-revolt is to offer a discount to the users that pay nothing. How do you discount zero? Now that is ANC logic for you!

How do you stop collecting money from licenses? Only allow people to give you license money if they have already given you toll money…………this has not been thought through properly for some reason.

The SABC stopped issuing licences years ago and now all you need is your licence number to show the inspectors if they want to know if you have paid your licence fee. If they stop issuing licence discs all a motorist will need is a reference to the payment.