Covid risk is over, says Bank of America 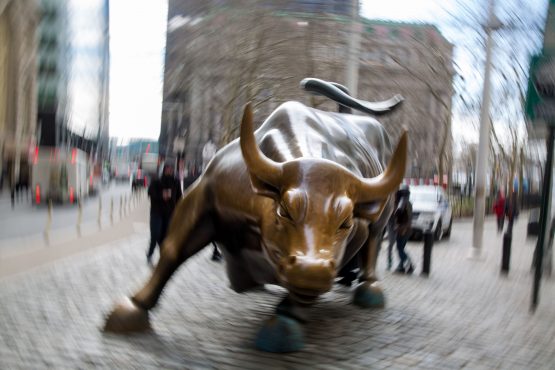 Inflation is seen as a bigger risk than the coronavirus by fund managers. Image: Michael Nagle, Bloomberg

The bulls are back and Covid is no longer the primary “tail risk” risk facing investors, says Bank of America’s latest Global Fund Manager survey.

A record 89% of fund managers surveyed expect profits to improve over the next 12 months, surpassing the levels of optimism last seen in December 2009 and February 2002.

Fund managers regard inflation a bigger risk than Covid, though the vaccine roll-out and possible disruptions in the bond market are still regarded as potential risks, but not as severe as they were a year ago.

Inflation expectations are at an all-time high, with 93% of fund managers expecting higher inflation in the next 12 months.

Investor optimism is at the highest level since February 2011 when Brent crude oil was over $100 a barrel. 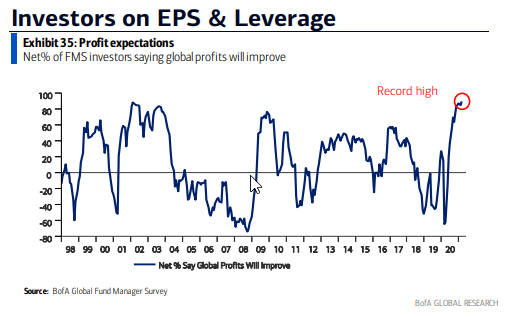 Fund managers have slightly increased cash holdings to 4%, which is high by historical levels.

Low returns on alternative investments and possible concerns about market shocks may account for this.

A year ago fund managers were piling into defensive assets such as cash, healthcare, staples and utilities, but are now rushing for cyclical assets like commodities, industrials, banks, materials and emerging markets.

There is growing pessimism over tech stocks, but rising optimism over banks for the first time in a year. Funds are cutting their allocations to tech stocks to levels last seen in 2008.

Most funds are still heavily invested in tech, deemed the most “crowded trade” among fund managers, according to Bank of America, though with declining enthusiasm.

“Long bitcoin” is creeping up on tech as a favoured trade among fund managers.

This is followed by “long ESG” (environmental, social and governance stocks) and “short US dollar”.

“Nobody believed that rates at 1.5% would cause an equity correction,” says the survey. “But the move from 1.5% to 2% is critical, as 43% of investors now think 2% is the level of reckoning in the 10-year Treasury that will cause a 10% correction in stocks.”

Yields of 2.5% on 10-year treasuries makes bonds attractive relative to stocks, though most fund managers believe the Federal Reserve will only start hiking interest rates in 2023.

A year ago chief investment officers were predominantly concerned with improving balance sheets.

Now their attention has shifted to the need to use cash for capital spending, reflecting the increasingly positive outlook in business conditions.

Expectations of a steepening yield curve in the bond market (where longer-term interest rates rise faster than short-term rates) are at near record levels, though there was a noticeable softening in these expectations over the last month, says Bank of America.

On the economic front, a record 91% of fund managers expect a stronger economy, with 63% expecting it to be a lot stronger.

At last. A positive headline about covid. Thank you Ciaran Ryan.

I would be cautious with most stock markets(with the exception of the JSE) at record highs.

America does not stop creating debt and the taxes are going up in the US.

Unfortunately Covid risk will be different in decent geographies compared to failing geographies( Brazil, Mexico , etc). Israel, the US, Chile, UAE and UK are leading the vaccination success.

Here..our dear expert, Prof Ueckerman expects millions of doses by month end. Maybe the dear had a drop or two too much of propofol when she said this.

Sadly the third world still has to suffer a lot from Covid-am I stress a lot!

It appears SA has left itself behind, SAA bailouts will forever be a scar on South Africa. We could’ve been at the same stage(s) as the leading countries on our vaccination program, yet for some reason we prefer lock downs and job losses, mind boggles

SA has always been a ‘long haul’ destination for tourism and investment. Our primary infrastructure made us relevant as such as an investment gateway into Africa. With our physical isolation, crumbling infrastructure and zero vaccine roll-out (I know medical specialists yet to be vaccinated), we have simply made ourselves literally irrelevant to the rest of the world. As far as tourism goes, crime was tolerated because of our natural beauty – but crime and the COVID disaster will close those doors. Other nations will pick up the ‘long haul’ slack. I think SA will simply never recover. Fault lines are now chasms. The only question is how to exit. Period

Great stuff ! We should benefit from this, never, at the rate SA is being looted and load shedded [and let’s not forget the bail outs and stealth taxes] I really believed that Cyril would be a breath of fresh for SA. But at the rate he’s going, we’re gonna run out of air.

We were all fooled by the frog boiler….