Emerging markets across the world have been devastated by surging commodity prices following Russia’s invasion of Ukraine.
By Elizabeth Low and Faseeh Mangi, Bloomberg 28 Jul 2022  07:37 An unprecedented energy crisis that’s gripping some of the most densely-populated and impoverished parts of South Asia may soon worsen as more fuel suppliers avoid selling oil to these nations.

Fewer companies are offering to sell fuel to state-owned Pakistan State Oil Co, while some banks have stopped financing and facilitating payments for energy imports. Sri Lanka is also struggling to secure fuel from its regular supplier India. Meanwhile, Bangladesh is having to schedule power cuts to preserve its fuel reserves.

Emerging markets across the world have been devastated by surging commodity prices following Russia’s invasion of Ukraine. In oil, though the price has come off from record highs on fears over a global economic slowdown, plummeting currencies across South Asia are keeping import costs prohibitively high. That’s pushing countries to the brink of collapse at a time when oil and energy are crucial in supporting their rebound from the crippling effects of the pandemic. 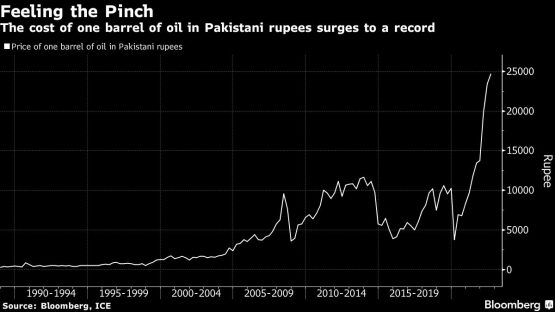 Fuel traders said they’re hesitant to supply gasoline and fuel oil to Pakistan on concerns the recent dramatic plunge in the rupee hampers the country’s ability to make payments. This is despite assurances from importing entities and an agreement by the International Monetary Fund to approve an extended funding facility. A worker onboard the Tulip Valletta fuel tanker at the UCT terminal at the Port of Colombo in Colombo, Sri Lanka.

Elsewhere, bankrupt Sri Lanka is struggling to secure fuel to alleviate shortages and control surging inflation. India, a regular supplier to Sri Lanka, began seeking upfront payment for oil, a move that sent a signal to other potential sellers that the country risks not being able to meet its liabilities. Bangladesh sought a loan from IMF, becoming the latest South Asian nation to ask for assistance.

Earlier this month, Pakistan State Oil received just one offer to sell gasoline and fuel oil. This is in stark contrast to May, when as many as eight companies participated in its gasoline tenders.

Pakistan’s imports of gasoline as well as diesel and fuel oil, which can be used as alternatives sources of energy for power generation, dipped 15% from the previous month as of July 19, according to Vortexa data. Separately, Pakistan’s request for liquefied natural gas imports were also met with a similarly lukewarm response. As well as banks curtailing financing for Pakistan’s energy imports, some have started charging higher rates as a risk premium, adding to costs and administrative hurdles to procure oil that the nation badly needs.

The rising cost of energy is placing a heavy burden on Pakistan. In June, costs surged almost 150% year-on-year and contributed to about half of the country’s overall $7.9 billion in imports, according to Pakistan Bureau of Statistics. That’s taking a toll on its power sector, where already close to a quarter of the nation’s power-generation capacity has been shut due to shortages of natural gas, fuel oil and coal, according to S&P Global Platts. The energy payments and dwindling foreign exchange reserves propelled the rupee to its worst weekly decline since 1998 last week.

In Sri Lanka, the nation’s energy woes show no signs of abating with key fuel supplier India now seeking payments in advance as credit lines get exhausted. The country’s energy ministry will launch a national program to ration and distribute fuel. Motorists line up to refuel at a gas station in Colombo, Sri Lanka, on Saturday, July 23, 2022. Supplies of petroleum reached at Port of Colombo on July 22, 2022.

Separately, Bangladesh’s government ordered an operational halt at diesel-fed power plants. The country, which has close to a month of diesel reserves, began scheduled power cuts to preserve its diesel and natural gas stockpiles to reduce the impact of costly fuel imports, according to an official of Bangladesh Petroleum Corp., who asked not to be identified as he isn’t authorised to speak publicly.

“The energy issues will create a ripple effect with prolonged power cuts and possibly hamper industrial growth in the region,” said Suleman Rafiq Maniya, head of advisory at Karachi-based Vector Securities Pvt. Affected parts of South Asia may have to learn to deal with less fuel and ration supplies, he added.