Can hurt investors’ returns as well as their ethics, according to risk-analytics firm Verisk Maplecroft.
By Greg Ritchie, Bloomberg 20 Feb 2022  00:16 Lending money to governments with questionable human rights records can hurt investors’ returns as well as their ethics, according to risk-analytics firm Verisk Maplecroft.

The best-performing countries on human and labour rights have significantly lower bond market spreads compared to the worst, even when taking into account factors such as level of income, it said in a report based on six years of its ESG data. That chimes with the benefits nations get from moving toward a low-carbon economy, with the most advanced enjoying pricing 13% lower than the worst, it said.

The findings suggest ESG risks are increasingly feeding through into sovereign bond pricing independently of credit rating scores and other factors. While the market for ESG debt has exploded, applying sustainability criteria to nation states issuing conventional bonds is still a nascent practice.

“Sovereign investors can and should explicitly take social factors into account,” Verisk Maplecroft analyst David Wille and head of markets James Lockhart Smith wrote in the report. “Many investors have doubted the materiality of the S in ESG because traditional assessments of social risks did not show an independent statistical relationship with bond pricing.” 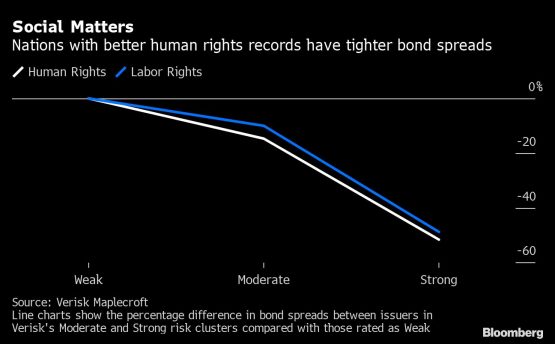 Funds under regulatory and client pressure to clean up their portfolios are pouring money into ethical debt, yet at around $4 trillion that’s still a fraction of the total government bond market. It has been slow to adapt to ESG concerns relative to stocks, since frameworks designed to evaluate corporations don’t easily translate into analysis of nation states.

ESG scores for countries, where they exist, have been criticised for being correlated to a nation’s wealth, potentially penalising poorer countries. Verisk Maplecroft on Thursday launched its own sovereign ESG ratings as well as an additional set of income-adjusted scores that aims to address this problem. The back-dated versions of these form the basis of the research.

A one-notch improvement in an issuer’s social rating is associated with bond spread tightening of nearly 4%, similar to governance ratings and more than for environment, Verisk Maplecroft found. A one-notch upgrade in its overall ESG rating is linked to a larger cut in bond spreads than “equivalent credit rating upgrades,” it said.

The integration of social and environmental issues into market pricing is a recent phenomenon. Verisk Maplecroft research from 2019 found markets were at best ignoring and at worst actively penalising governments making the most progress away from fossil fuels.

“Environmental risk is probably the least material in the shorter term but most devastating in the longer-term,” said Lockhart Smith in an interview. There is now “a value-based case” for incorporating ESG into sovereign debt, he said.

When the redistributive policies of a developmental state lead to the largest unemployment figures in the world, as it does in South Africa, it is a serious violation of human rights. These shortsighted populist policies cause mass unemployment and poverty, in what once was the wealthiest economy in Africa. To waste so much human potential in the midsts of such enormous mineral wealth and so much economic potential is the worst kind of oppression, especially when the process is geared to benefit only the political elite.

The Tripartite Alliance is the most oppressive government, with the worst human rights record on earth. Look at the squalor in the townships. Keep in mind the Life Esidimeni massacre, the atrocities committed by an incompetent police force on a daily basis, the thousands of children who are malnourished, the implosion of medical and sanitation services across the nation, and the uncontrolled rate of crime against women and children.

We have all this degradation while the members of the Alliance are BEE billionaires and the connected labor unions enjoy cozy, protected, and extractive salaries.

When lenders buy SA government bonds they support the criminality of the ANC, perpetuating the oppression of poor citizens, and they finance the political elite to plunder the resources of the nation. It is only the availability of credit that keeps Luthuli House in power. That implies that bondholders are propping up the criminal crowd in Luthuli House.

Everyone — Including overseas supproters of this government are complicit in the suffering they are causing.
The real problem is it will go to the Zimbabwe style of implosion and will never recover — See the DRC for effect !!