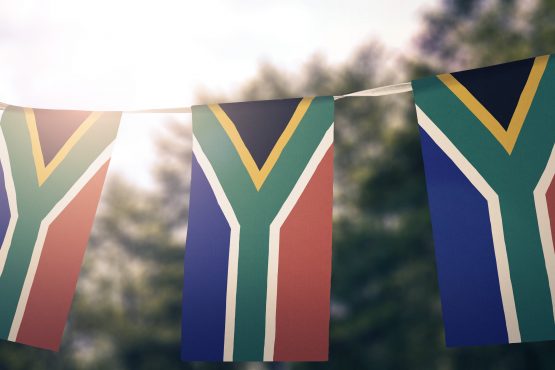 It says “energy supply constraints and other structural weaknesses” along with delays in the Covid-19 vaccine rollout, were the reasons it revised its GDP growth forecast downwards for the first half of the year.

The French bank has a dimmer economic forecast than other institutions, which also expect the country to struggle.

“We maintain our sub-consensus 2021 growth forecast of 2.5% which compares with a current Bloomberg consensus of 3.8%,” says BNP Paribas SA senior economist Jeff Schultz.

There was some good news. The ending of national lockdown has seen a pickup in the economy.

“We have, though, upgraded our estimate for last year by 0.9 percentage points to a contraction of 7.1%, reflecting a faster return to pre-pandemic activity levels for sectors such as mining,” Schultz adds.

Despite this, the country still has some difficult challenges it must deal with in order to overcome its economic difficulties.

One of the biggest drags on the economy is the unpredictability of the country’s electricity supply. The report notes that despite collapsing domestic demand and curtailing supply-side activity, Eskom implemented record load shedding in 2020, despite more than 1 600 gigawatt hours (GWh) of power generation being taken offline. 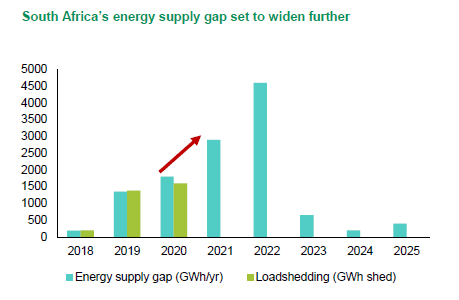 BNP Paribas says energy supply estimates from the Centre for Scientific and Industrial Research (CSIR) indicate that the supply gap could be more than 60% larger this year.

“Large swathes of load shedding, therefore, seem unavoidable this year, in the absence of a marked improvement in Eskom’s energy availability factor, which fell to just 55% in the early weeks of January.”

BNP Paribas says given the extent of the energy crisis, it’s crucial that there is a continuation of the deregulation in the power sector and Eskom’s separation into generation and transmission happens.

SA’s slowness in rolling out its Covid-19 vaccine programme is also an issue. In contrast with countries such as Russia, China, Chile, Argentina and Egypt, which expect to have 70-80% of their populations vaccinated by the end of the year, BNP Paribas does not see SA reaching ‘herd immunity’ by the end of the year.

BNP Paribas does not see the emergence of the ‘second wave’ of the Covid-19 pandemic leading to tighter restrictions – for now.

“Our base case forecasts do not assume that a ‘hard lockdown’ will be implemented because we think that economic considerations will be given more weight than in the initial wave. Should infections be seen to be spiralling out of control, however, we cannot rule out harder regulations with a greater economic impact.”

On the positive side, the weakness of the dollar to the rand and a recovery in the Chinese economy could support “key industrial and precious metal commodity exports”. This in turn could boost the contribution of exports to GDP growth.

National Treasury’s eagerness when it comes to issuing bonds has also provided it with a cash buffer, which will create a “safety cushion for possible fiscal slippages in the short run”.

This has created an opportunity for investors, as the yields on the country’s bonds are high when compared to other emerging markets.

“In our local markets model portfolio, we continue to hold South Africa rand and SAGB [South Africa Government Bond] duration as an overweight.”

Though the bond issues provide some cushion, they essentially just buy time for the government to make big cuts to its budget. With little space to raise taxes, it’s likely that the state will push through with “austere budget plans”. This, however, means getting control of the public sector wage bill.

The bank says this will be a real test for the government because the trade unions’ relationship with National Treasury has taken strain since the Labour Appeals Court ruled that the state had the right not to increases public servants’ wages.

“We see a good chance of widespread strike action as early as February, possibly tempered by Covid-19 restrictions and existing high levels of unemployment.”

On the international monetary arena, the ducks are in a row for a substantially weaker dollar over the next decade. This does not necessarily imply a stronger rand though. We have seen substantial rand weakness during periods of dollar weakness in the past. The rand may weaken against the Euro at a faster rate than the dollar. The point is this – the South African economy and especially the JSE, performs well, and may even outperform developed markets during periods of dollar weakness.

The South African economy is on the ropes, out on its feet, hoping to be saved by the bell. The weakening dollar may prove to be our saving grace. This is the only scenario that can save us from Venezualan-style hyperinflation of the currency. The rescue of the South African economy from the cliff will be the unintended consequence of loose Federal Reserve Policies in combination with rising fiscal spending in the USA. This is a very likely scenario.

Dollar weakness causes JSE strength. Especially for the Resources Sector. That will support the fiscus to support social projects to avert social unrest. We are totally dependent on the Federal Reserve Bank of New York. Contrary to what the ANC may believe, we are not an independent nation and they are not in control of the economy. The ANC is not a government. They are merely an unnecessary and debilitating nuisance that leads the nation toward catastrophe.

The oracle of RSA 1 month ago

Why would a weak dollar support recourses ??

A weak rand will support recourses as we export at a premium.

Contrary to popular belief (according to the popular media), a weak dollar supports the price of resources and the profit-margins or resource companies to a much greater extent than a weak rand during periods of dollar weakness. The dollar price has a larger effect than the rand price alone.

This is the mechanism of action.

Due to the reserve currency status of the US Dollar, most commodities, if not all, are priced in terms of the dollar. During periods of dollar strength, international buyers ultimately pay for commodities in their own currencies, so they bid the price lower in dollar terms, while the international sellers offer the price lower in dollar terms. Commodity prices decline in dollar terms when the dollar is strong. A strong dollar also drains the world of dollars in circulation, leading to a liquidity squeeze, or a shortage of dollars. This process acts like “austerity measures” or a contraction in the money supply for emerging markets who have to pay interest in dollars, on the dollar-denominated debt. A stronger dollar leads to economic contraction, or slower growth at least, in the rest of the world. This then eventually leads to slower growth in the USA.

The dollar has strengthened by 34% over the last decade and this led to financial crises in emerging markets across Africa and South America. Most are flirting with default and hyperinflation. The dollar is at the beginning of a prolonged period of weakness due to internal structural monetary and debt issues.

When the dollar moves weaker, the commodity prices rise in terms of the dollar and it becomes easier for mining companies and governments to service their dollar-denominated debt. Their profit margins increase because the “dollar inflation” increases relative to the local “cost inflation” of the mining company. The margins open up. A weaker dollar essentially drives rising inflation in the rest of the world while a stronger dollar drives deflation or economic contraction. A strong dollar is very bad for emerging market economies.

Did I answer your short question with an equally short answer?

The oracle of RSA 1 month ago

The resources sector has grown rather aggressively in the past 3 years.

At the same time the rand/dollar has weakened , which is the exact opposite of what you are saying.

Would you invest in an Anglo or kumba at this point in time ?

I agree that a weaker dollar would be very beneficial to SA. I just don’t see it on the commodity side

Nothing new, South Africans are used to “Difficult” x 10

Most Americans will jump off a tall building if they read one months’ South African news, and two weeks in the days of the Zuma era.