The euro area’s newest recruits have no regrets about joining the currency bloc but are grappling with one of its major drawbacks.
By Aaron Eglitis and Milda Seputyte, Bloomberg 15 Jan 2022  00:42 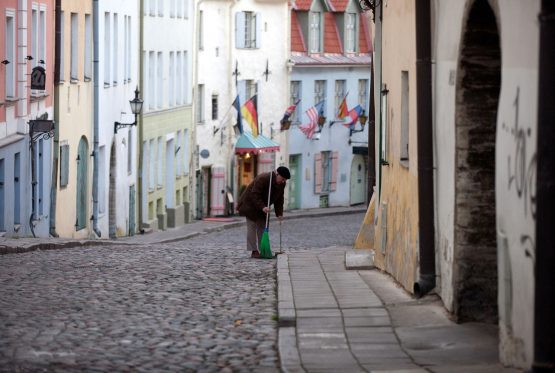 The euro area’s newest recruits have no regrets about joining the currency bloc but are grappling with one of its major drawbacks.

In the Baltic country of Estonia, inflation clocked in at a two-decade high of 12.2% in December. Nearby Lithuania didn’t fare much better, with data this week showing price growth more than double the euro area’s record 5% rate.

They shouldn’t expect monetary policy to come to the rescue any time soon: The European Central Bank’s chief economist reiterated on Tuesday that an interest-rate increase is “highly unlikely” in 2022 as forecasts suggest inflation will slow below the ECB’s 2% goal in the medium term.

That contrasts with more aggressive action in nations that aren’t part of the euro area, with central bankers from Warsaw to Budapest acting aggressively to curb the kind of price gains not seen since the aftermath of communism. If we had our own monetary policy “we’d probably be doing what Poland is doing and raising interest rates,” said Martins Abolins, an economist at Citadele Banka in Riga, the capital of Latvia, where consumer prices jumped 7.9% last month.

While borrowing costs have been “a bit too low” for the Baltic region for years without generating serious economic imbalances, the growing share of wages in gross domestic product is a cause for concern, he said by phone.

That concern is on view in Estonia, where the government is considering moves to cool inflation through the budget.

“If we have a single interest-rate policy across the euro area, then the role of national fiscal policy is to smooth over the differences,” Finance Minister Keit Pentus-Rosimannus told Bloomberg last month.

Her Lithuanian counterpart Gintare Skaiste concurs, telling a news conference Wednesday that the issue of diverging economic situations has been raised at euro-group meetings.

“Finding policies that would suit everyone is difficult,” Skaiste said. “Therefore, we should rely more on national measures that countries can take.”

Compounding the rate mismatch, there’s an acute shortage of workers in the region, while billions of euros in EU pandemic-recovery cash is set to start arriving soon. All the same, there’s no doubt the Baltic nations are happy they adopted the euro. Alongside economic and trade perks, the switch helped cement a Western orientation for the region of 6 million people, outside the orbit of Moscow.

Being part of the euro area has been a “massive benefit,” according to Latvian central bank Governor Martins Kazaks, whose country joined eight years ago.

“Take a look at the very simple example of the crisis of 2008 and the crisis of 2020,” he told an online event this week. “If at that time we had no possibility to borrow and the fiscal adjustment had to be extremely painful, now it’s a very different story.”

Unlike in places like Germany, there’s also little public grumbling over the current bout of steep price rises, with many Baltic citizens having survived the hyper-inflation triggered by the collapse of the Soviet Union.

In some ways, their current predicament is just a more extreme version of what’s happening in the euro zone’s larger members, with energy the driving force.

Half of last month’s increase in Estonian prices came from energy, with electricity and natural gas costs up more than 120% from a year earlier in December and usage higher in the colder northern temperatures.

But their plight may also ring alarm bells at the ECB, with the central bank in Tallinn speaking in more urgent terms than policy makers in Frankfurt about the danger of second-round effects.

“High energy prices mean inflation won’t come down in the near future,” Sulev Pert, an economist at Estonia’s central bank, said last week. “It’s bad for the economy if a temporary spike in inflation were to lead to higher labor costs for companies, pushing them to adjust their own prices and so causing a wage-price spiral.”