No decision has been taken on future monetary moves. A spokesman for the ECB declined to comment on its the path of interest rates.
By Carolynn Look, Bloomberg 12 May 2022  09:59 European Central Bank policy makers are increasingly embracing a scenario of taking interest rates above zero before the end of the year, according to officials familiar with the matter.

With Governing Council members already converging around a hike of a quarter point in July, at least two further moves of that size before January are becoming a plausible outcome for officials from across the decision-making spectrum, said the people, who asked not to be identified discussing private deliberations.

That would suggest ECB policy makers are starting to align with the views of money markets, which currently show investors betting on three increases in the deposit rate from the current -0.5% before the year is out.

No decision has been taken on future monetary moves. A spokesman for the ECB declined to comment on its the path of interest rates.

The euro extended gains to trade around $1.0554. Money markets brought forward bets for ECB rate hikes, pricing around 91 basis points of tightening by year-end compared to 89 basis points before the report.

Bank of France Governor Francois Villeroy de Galhau agreed publicly with that outlook last week, calling the prospect of above-zero rates this year “reasonable.” His Belgian colleague, Pierre Wunsch, said in an interview last month that such a scenario “would be a no brainer.” 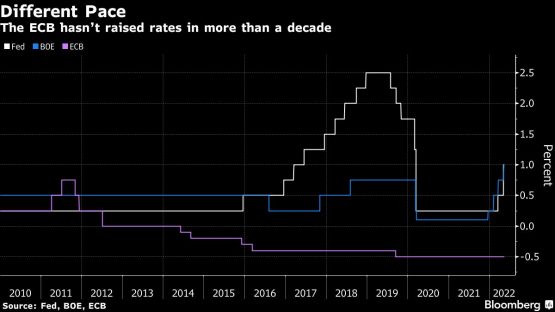 With inflation approaching four times the 2% target, officials including ECB President Christine Lagarde are now signaling readiness to enact the first rate increase since 2011 in July, following the conclusion of net asset purchases shortly before then. Speaking on Wednesday, she also stressed subsequent moves won’t be aggressive.

“After the first rate hike, the normalisation process will be gradual,” Lagarde said in a speech in Ljubljana, Slovenia.

That would continue to set the ECB apart from the likes of the Federal Reserve and the Bank of England, which are acting more forcefully to combat the steepest inflation in decades. The US central bank delivered a half-point rate increase earlier this month.

Bank of America economists reckon ECB policy makers will probably be able to make four moves in 2022, bringing the deposit rate to 0.5% by December. Policy makers will likely keep a close eye on incoming data and market reactions to ensure their normalization steps don’t hurt the region’s economic recovery.

Price growth in the 19-member euro zone has broken record after record in recent months — driven partly by Russia’s war in Ukraine but also pandemic-related supply snarls. Fears over economic growth are also mounting, however, with German Finance Minister Christian Lindner warning Wednesday of the risk of stagflation.

The ECB first took rates negative in 2014, and they have remained below zero since then. That’s been a challenge for some countries, particularly Germany, where poor returns offered to savers by banks implementing the policy sparked criticism of the Frankfurt-based central bank.

Against such a backdrop, Bundesbank President Joachim Nagel signaled how he is focused on exiting a negative stance as he too backed a first rate hike in July.

“When you’re in a territory below zero, it seems to be first of all necessary to get into positive territory back again and changing the focus away” from the ECB’s deposit rate and back to its so-called “main refinancing operations rate,” he said. “This is what I would like to achieve if we’re talking about the next steps.”