The controversy ridden Karpowership energy generation plan has been dealt another blow, with the Department of Forestry, Fisheries and the Environment deciding not to give the plan the relevant environmental authorisations.

Minister Barbara Creecy’s department confirmed the decision in a statement issued on Thursday.

Turkish-linked Karpowership SA (Pty) Ltd submitted its application for environmental authorisation for its gas-to-power “powerships” to the department in October last year.

The company was announced as one of South Africa’s new emergency IPP deals by the Department of Mineral Resources and Energy, which is headed by Minister Gwede Mantashe, earlier this year in March.

While Creecy’s department has refused environmental authorisation of Karpowership’s plan, this decision can be appealed by the company or any other interested party.

“The applicant had proposed to locate the three powership projects at the ports of Richards Bay, Ngqura and Saldanha to generate electricity from natural gas to be evacuated through transmission lines to substations linking to the national grid,” the Department of Forestry, Fisheries and the Environment noted in its statement regarding its EIA rejection of the plan.

“The powerships were to be assembled off-site and be delivered fully equipped and functional to the different ports. The above mentioned applications came as a response to the Department of Mineral Resources and Energy’s requests for emergency power supply interventions linked to the Risk Mitigation Independent Power Procurement Programme,” it added.

Creecy’s department further pointed out that “the competent authority” in the department had adjudicated these applications in terms of the National Environmental Management Act (NEMA) and specific sections of the Environmental Impact Assessment Regulations.

“The final reports were submitted to the department for decision-making on April 26, 2021. The competent authority had until June 25, 2021 to reach a decision, as the three projects were classified as strategic integrated projects, which meant the 57 day timeframe, as gazetted in the National Infrastructure Act, applied,” it said.

The department added that copies of the records of refusal are available directly from Triplo4 or the competent authority at EIAadmin@environment.gov.za.

“Should any person wish to lodge an appeal against the decision, he/she must submit the appeal to the appeal administrator,” the department noted.

Probably move to minister of health…..

The electorate needs a better selection process at the voting booth.
As long as SA is as tribally divided, and voters are easily misled, poorly informed and educated, we will have a very poor govt.
A first big step this scrapping of the power ships, now the WHOLE RMIPPPP should be cancelled as it is irrational, uneconomical, and could do without any fossil fuel powered back up.
Wind, PV- solar, combined with storage, so called BESS, battery energy storage systems, and probably CSP+TS, concentrated solar power with thermal storage can be built, and supply pure, clean power for less than R 1/kWh when
1- projects are large enough, not just restricted to less than 150 MW. Economies of scale are hugely important to bring kWh prices down.
2- All requirements for BBBEE, community participation, local content are scrapped.
3- All other licensing, red tape, bureaucratic hurdles are removed as much as possible, or at least simplified.
Prices now in the several planned RMIPPPP proposals stand at R 1.45-1.88/kWh.
Energy expert Clyde Mallinson calculated two months back that 5 GW of wind + PV solar with BESS can be built and produce at 60 cts/kWh. The next bid window 5 of REIPP projects should be 5 GW, and be adjusted as above.
Going global prices for large PV solar projects in sunny areas 15-45 cts/kWh. Wind 45-80, PV + battery storage : 45-75 Randela cts. In the last BW 4, bidwindow 4 of REIPPs in 2016 here in SA, relatively small PV solar and wind projects came in at 57-92 cts/kWh. Since then renewables have continued to drop.
From 2010-2020 prices dropped : PV 80-85%
wind 30-55%
CSP 35-50%
Battery storage 90%
Can we now finally drop the ANC and dinosaur fossil Gwede at all next elections ?
The whole energy sector has to be liberalised, deregulated and privatised as much as possible.

Good news…I rather perish in the dark than let the Gupta brotherhood provide me with electricity!

We don’t want these foreign ships… Local is lekker!

If they ran proper project management (and Corruption control) @Eskom we would not need any such ships.

But anyone stupid enough to go against Mr. Zuma would have lost their jobs.

Seriously you think ESKOM is lekker. They supply the vast majority of electricity and are renowned for high costs, inability to supply continuously , incompetent overpaid employees and corruption.

Give me o’Gwede’s head on a plate.

So the best and brightest 65 people in SA, the Cabinet, voted for a 20 year contract as a short term measure?

The contract should be scrapped on financial and economic grounds, before environmental grounds.

Yes, but what is in it for me?

Pity that it had to go all the way to the environmental department to get rejected. 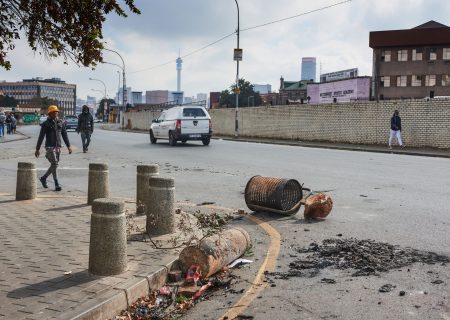