The euro’s descent this year is just one part of a global story of dollar dominance.
By Greg Ritchie, Bloomberg 13 Jul 2022  16:34 The euro has suffered a swift and brutal slump this year, and now it’s crossed a major threshold for the first time in more than two decades: parity with the dollar.

The 12% decline is the result of multiple pressures, from the war in Ukraine to an energy crisis and the growing risk that Russia cuts off gas exports and pushes the euro area into recession. Add in central banks moving at vastly different speeds and an in-demand dollar, and some analysts say parity may not be the end point, but merely a stepping stone to further weakness.

“A break of parity may have been delayed by some market participants attempting to protect a sea of options being triggered below that level, but it is not difficult to put together a case in which the euro could fall further,” said Jane Foley, head of FX strategy at Rabobank in London. “This very much depends on the gas flow from Russia into Germany and whether there will be rationing over the winter.” 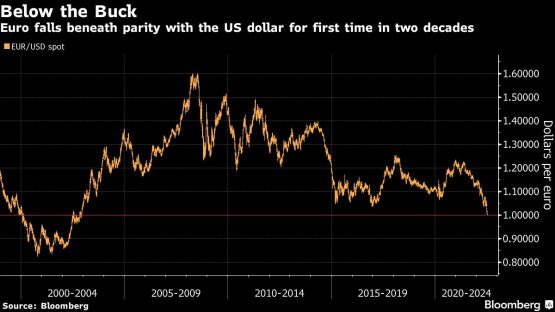 The common currency slipped as much as 0.4% Wednesday to touch a low of $0.9998. The final leg lower came after data showed US inflation accelerated by more than forecast, boosting bets on Federal Reserve rate hikes. It bounced back to trade at around $1.003 as of 2:40 p.m. in London.

The downward spiral hasn’t been accompanied by the type of existential doubts that hung over the euro when it plunged during its infancy in the early part of this century, or when the sovereign debt crisis took hold a decade ago. However, it’s still a problem for the European Central Bank.

It’s also trouble for consumers in the 12 trillion-euro economy, feeding an inflation spike that’s already out of control, with prices rising at a record pace close to 9%.

The depreciation has been incredibly rapid, given the euro was trading close to $1.15 in February. It’s all the more remarkable given that less than two years ago ECB policymakers were concerned about excessive euro strength leading to an inflation undershoot. Now they confront a different world: a dramatic plunge in their currency and consumer prices surging.

Some ECB policy makers have already signaled that the weakness is on their minds, particularly when it comes to imported inflation. Earlier Wednesday, Francois Villeroy de Galhau said the central bank is watching the euro’s drop because of its effect on consumer prices.

“The ECB does not target a particular exchange rate,” an ECB spokesperson said on Wednesday. “However, we are always attentive to the impact of the exchange rate on inflation, in line with our mandate for price stability.”

In addition to the dual inflation-recession threat, the ECB is also dealing with the risk of sovereign borrowing costs diverging too much as it reverses course on stimulus. After Italian yields spiked last month, the Frankfurt-based institution began work on a tool to prevent the eruption of another debt crisis in the region.

The euro’s descent this year is just one part of a global story of dollar dominance. The greenback has been in favor this year as a haven investment, helped by higher US interest rates, and there’s been speculation the rally could spur global policymakers to intervene to weaken it at some point.

At a meeting in Tokyo on Tuesday, US Treasury Secretary Janet Yellen and Japan’s Finance Minister Shunichi Suzuki said that volatile exchange rates pose a risk, and pledged to consult and “cooperate as appropriate on currency issues.” The yen has declined to its weakest against the dollar since 1998.

The single currency, meanwhile, has particularly suffered because of Europe’s proximity to the Ukraine war and its reliance on energy imports from Russia. Monetary policy is also a driving force, given that the ECB has been slow to join the kind of aggressive policy tightening deployed elsewhere. At the same time, increasingly-large Federal Reserve interest-rate hikes have supercharged the dollar, and created a rate differential that will keep the pressure on the common currency.

Nomura International Plc strategist Jordan Rochester is already targeting further pain with a drop to 95 US cents. Citigroup sees it sliding below that level if Russia cuts of gas exports to Europe. The euro “remains effectively unbuyable this summer,” Kit Juckes at Societe Generale SA said earlier this month.

The euro, now the currency for 19 countries and around 340 million people, has had many ups and downs since it began in 1999. A bout of weakness in its early days pushed the currency below 85 cents against the dollar and led to questions about its viability and even dire predictions of its demise.

Eventually the ECB, along with other major central banks from the Group of Seven, staged a surprise intervention to boost the euro in 2000.

Shortly after Russia invaded Ukraine, we predicted the Euro would fall through parity. The war is a body blow to the Euro zone. It undercuts Germany’s economic model, which for decades was built on cheap Russian energy. Without German growth, the Euro zone is in real trouble… pic.twitter.com/xwdwVig5qq

The euro’s initial slump gave way to a period of appreciation, with the currency at one point reaching $1.60 in 2008. That strength was seen as damaging to the economy, and euro-area politicians blamed it for hurting companies. Among those voices was France’s finance minister at the time, Christine Lagarde.

The euro weakened again as the global financial crisis took hold in 2008, and then entered a period of volatility as Europe’s sovereign-debt crisis wreaked havoc. Once again, the euro’s future was in doubt amid soaring borrowing costs, bailouts for indebted nations, a recession and record unemployment. It was at that time that then-ECB President Mario Draghi compared the euro to a bumblebee — a “mystery of nature” that shouldn’t be able to fly, but can.

Once the worst of that episode passed, the ECB continued with stimulus, limiting the currency’s upside. Then, starting in mid-2021, the euro began a steady slide downward toward parity.

While the ECB could hike more aggressively to buoy the euro now — a rationale Governing Council member Robert Holzmann has used to justify a half-point rise — its agency may be limited by the darker economic outlook. In a Bloomberg survey this month, economists put the risk of a euro-area recession at 45%, up from 30% in June.

“No doubt the ECB will be quite concerned by the move, especially if it develops into a ‘sell the eurozone’ mentality,” said ING Groep NV strategists led by Chris Turner. “Yet faced with the looming risk of recession — and the euro being a pro-cyclical currency — the ECB’s hands may be tied in its ability to threaten more aggressive rate hikes in defence of the euro.”

Surely the header should be “ Dollar rises to Euro parity”? In Rand terms the Euro has remained the same whilst the Dollar has increased in value against the Euro and we’re paying more Rands for the Dollar.