Euro Stoxx 50 futures were down 3.3% as of 4:33 a.m. in London after slumping as much as 4% earlier. In the US, futures tracking the Nasdaq 100 Index signal the equity gauge is poised to fall into a bear market on Thursday for the first time since the depths of the pandemic selloff. 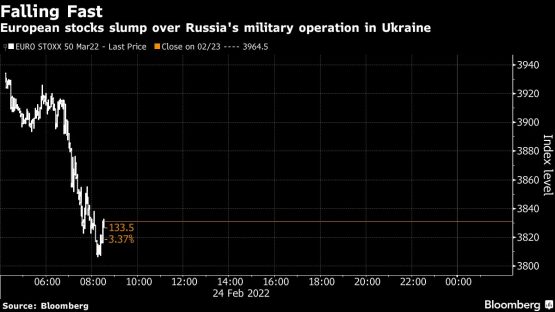 Putin said he’s ordered a “special military operation” to protect the people of the Donbas separatist region, but said Russia will “aim for demilitarisation and denazification of Ukraine.” The decision sparked a selloff of risk assets and sent investors flocking to safe havens. Brent crude hit $100 a barrel for the first time since 2014, while the euro fell 0.8% against the dollar.

The crisis in Ukraine has become the latest concern for investors in European stocks. Beyond that, traders have been concerned about increasingly hawkish central banks and the effect soaring inflation will have on growth.

“I think what we’ve seen over the last 24 hours is that everything is appearing a little bit vulnerable,” Eric Robertsen, chief strategist and global head of research at Standard Chartered Bank, said in an interview with Bloomberg Television, adding that he would wait for “dust to clear” before getting back into stocks.