But increasing activism and the growing number of ‘no’ votes on remuneration policies and their implementation by shareholders could change this.
Bryden Morton and Chris Blair  /  4 October 2019 10:01
1 The earnings gap between those at the top of an organisation and those at the lower levels has become an increasingly contentious point. Image: Shutterstock

Executive pay is a topic that regularly finds its way into the media, and often for the wrong reasons. This is not unique to South Africa; the topic is pertinent around the globe given the levels of income inequality that exist.

It has been stated that, collectively, the eight richest individuals are richer than the poorest 50% of the world population.

This shocking statistic brings to the fore how large the gap between the rich and the poor is.

This economic landscape is why the financial gap between those at the top of an organisation and those at the lower levels has become an increasingly contentious point.

The 14th edition of the 21st Century Executive Pay Barometer – which analyses executive pay within JSE-listed companies – has found that although there have been marginal changes in executive pay trends, the overall picture remains a familiar one.

The executive increases received by CEOs, CFOs and executive directors are comparable with the median increase received by general staff (which stands approximately at 6% according to the 21st Century Increase Report).

The graph above indicates that executive guaranteed pay increases would not have had a significant effect on the wage gap, as they have been in line with those received by general staff.

Current inflation forecasts from the various banks indicate that the consumer price index (CPI) in South Africa is expected to increase between 4.3% and 4.5% in 2019. This means that executive increases (as well as general staff increases) outstrip general inflation but, as we know, executives are less affected by inflation because of their spending patterns.

The wage gap remains positively correlated with the size of the company. The graph below (showing the wage gap by company size, based on guaranteed pay) illustrates this. 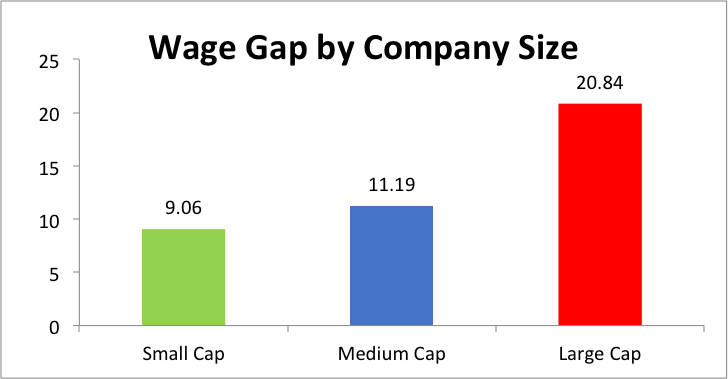 The positive correlation between the size of the company and the wage gap is a result of larger companies having their CEO at a higher grade (which attracts a larger salary) than smaller companies. The wage gap illustrated in the graph above only looks at total guaranteed pay.

The elements of an executive’s pay that are usually publicly scrutinised are the less visible, variable pay elements (short-term and long-term incentives).

Both types of incentives are viewed as significant contributors to the wage gap when total earnings (including variable pay) are analysed – it can increase the wage gap by two to three times.

The graphs below indicate the median annual variable pay percentage of total guaranteed package that each kind of executive received. The graphs above indicate how significant variable pay is in an executive’s pay mix.

In the past, executive variable pay has been scrutinised as a result of the pay and performance link. This link has not always been as transparent as the public would like and is increasing questioned.

The introduction of the King IV governance guidelines has increased the transparency of the link. King IV has also introduced two non-binding votes to shareholders on the topic of executive pay. One vote is based on the remuneration policy, the other vote is based on the implementation of the policy. This year we have seen an increase in the number of ‘no’ votes received by companies in both instances.

This increased activism has caused a number of organisations to review their remuneration policy and make decisions on whether it should be adjusted or not after stakeholder engagement.

The trends within executive pay have not changed significantly and remain an issue that finds its way into the media regularly.

The saying that the tallest trees catch the most wind rings true in this case, as it is those who earn the most who are routinely scrutinised.

As things stand, the executive pay trends observed in the past have persisted in 2019 – but it will be interesting to see whether the increased activism around executive pay votes will lead to any material changes in these trends.

Morton is data manager and Blair CEO at 21st Century.

Whilst interesting, this serve as ammunition for the likes of numsa/cosato/amco ( small caps intended)

May i be so bold to propose an article of union financials and what the ceo/hoofbek of the union earn vs his clerk ??
Increases passed year to year to all unions staff??
Are all the union members entitled to car allowance ( flashy cars their thing)?? I mean all are equal are we not ?
Do all union staff get that despicable capitalist private medical aid?
Bonus scheme for good best extortionist of the year ??
Are all union staff full time employee;s ( the list go on)

This should be compulsory reading for all union meetings….would love to place this on the table at my reception..