Fitch Ratings warned debt stabilisation in South Africa will remain a challenge as it maintained its stable outlook on the country’s sub-investment grade credit rating.

The company affirmed South Africa’s long-term foreign-currency rating at BB-, three levels into junk status, in a statement late Thursday. The decision reflected lower than previously anticipated government debt last year and improved metrics such as the current-account balance, partly due to higher prices for commodity exports, it said.

The national budget presented by Finance Minister Enoch Godongwana in February projected government debt will peak at 75.1% of gross domestic product in 2024-25 and then gradually decline. Fitch projects debt at 75.9% of GDP for that year and expects it to continue rising beyond this. 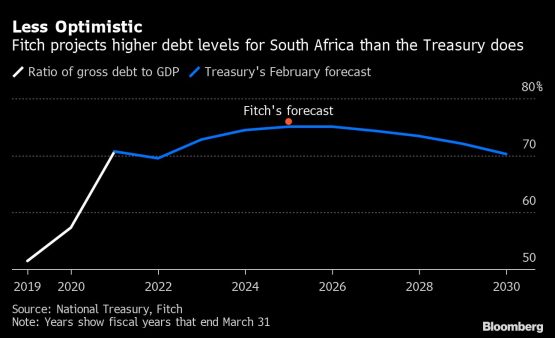 “The poor finances of many public enterprises mean they pose considerable risks to public finances,” Fitch said. State-owned power utility Eskom “is expected to require additional financial support of around R150 billion ($9 billion), which is not factored into our debt forecast due to the uncertain timing and form of support,” the ratings company said.

Assessments of South Africa’s debt from the three major firms are at the lowest levels since the country first obtained credit ratings in 1994. Moody’s Investors Service assesses it two steps below investment grade while S&P Global Ratings ranks it on the same level as Fitch.

The government will continue to demonstrate its commitment to fiscal sustainability and enable long-term growth by narrowing the budget deficit and sizable debt, the National Treasury said in a statement in response to Fitch’s announcement.