The Fed has a tough task ahead — slow the economy enough to get a handle on inflation, but not so much so that it causes a recession.
By Reade Pickert, Bloomberg 28 Apr 2022  06:53 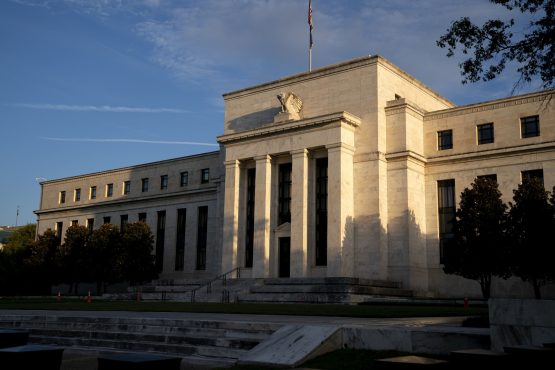 The US economy’s latest report card — featuring fresh readouts on growth, inflation, spending and wages in the first three months of the year — is set to include a mix of good and bad marks.

The headline measure of first-quarter economic growth will appear weak, perhaps even negative, as a ballooning trade deficit and slower inventory growth masked solid consumer spending. Income gains in March were likely erased by an acceleration in inflation.

Resilient consumption, robust business investment, firmer wage growth and the fastest price gains in decades lend support to a more aggressive policy response from the Federal Reserve next week, when officials are expected to raise interest rates by the most since 2000.

But ultimately, the figures are backward looking. How the economy weathers persistent inflation, dwindling fiscal support, rapid interest rate hikes and any potential shocks in the year ahead is far from certain. The Fed has a tough task ahead — slow the economy enough to get a handle on inflation, but not so much so that it causes a recession.

Here’s a look at where the economy stands — and economists’ best guesses for where it is headed.

Gross domestic product is expected to have grown at an annualised pace of just 1% in the first quarter, marking a rapid slowdown from the 6.9% pace at the end of 2021. But the deceleration will largely reflect a slower pace of inventory growth and a wider trade deficit, rather than a weakening in consumer and business demand.

“That headline is going to be misleading,” said Sarah House, senior economist at Wells Fargo & Co. “Overall the details will show it’s another strong quarter.” Data out Wednesday showed merchandise imports surged in March. The wider trade deficit is anticipated to be a larger drag on growth than originally expected. Stephen Stanley, chief economist at Amherst Pierpont Securities LLC, revised his GDP estimate lower to -0.3% after the data, noting net exports could subtract up to four percentage points from growth in the first quarter.

Looking ahead, businesses will continue to replenish their inventories, with quarter-to-quarter fluctuations. Meantime, net exports will likely continue to be a drag on growth for the rest of the year, given “the US economy is a lot stronger than what we’re seeing globally,” House said.

As for the consumer, “they’re spending with a little bit more discretion than they were — say six months ago — but they’re still spending,” said Gregory Daco, chief economist at Ernst & Young LLP.

Bolstered by a tight jobs market, solid wage gains and leftover savings from trillions of dollars in government stimulus, Americans continue to dole out cash for a variety of goods and services despite growing headwinds. Economists expect consumer spending grew at a 3.5% annualized pace in the first three months of the year, which would be the strongest pace in three quarters.

“Weak exports amid a global growth slowdown, coupled with robust imports due to strength in both domestic demand and the dollar, opened a wide trade gap. Meanwhile, excessive inventory accumulation over the turn of the year likely led to slower inventory rebuilding in the first quarter. Consumer and business spending is gaining momentum going into the second quarter, which we estimate will keep GDP growth above trend for the year.”

Pent-up demand is expected to help sustain outlays in the months ahead as households increasingly spend on services like travel and dining out. But a variety of factors, including persistent inflation, higher interest rates and a fragile global backdrop, will lead to a moderation in spending growth as the year goes on.

“It’s a robust economy today, but one in which economic momentum will be cooling as we move into 2023,” Daco said. Meantime, inflation has reached a fever pitch. The Fed’s preferred measure of inflation, out Friday, is estimated to have risen 6.7% in March from a year earlier. After adjusting for price increases, personal income and outlays likely fell last month.

And while wages are rising at a rapid pace — as the latest employment cost index figures will likely reinforce on Friday — they’re not keeping up with inflation in the aggregate. Compared to a year earlier, real average hourly earnings have declined for 12 straight months. 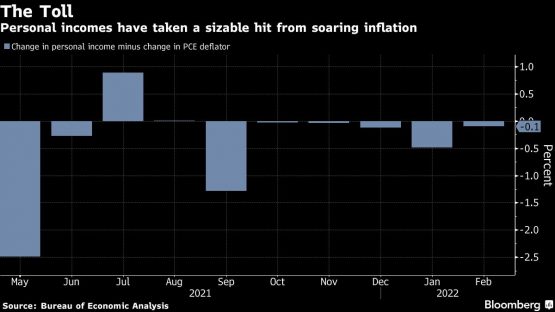 Tax refunds, which are trending about 8% higher than last year, and the remains of the expanded child tax credit should help bolster incomes. Still, households are increasingly having to lean on savings to spend at the current pace. The savings rate is just above an eight-year low.

“Even if we take out some of the gas price increases, we’re still facing an issue of our incomes not keeping up with the pace of consumption and something is going to have to give,” said Stephen Gallagher, US chief economist at Societe Generale SA.

And lower-income households will disproportionately feel the brunt of the squeeze.

But a key piece of the puzzle is what happens to the pace of wage growth. Ethan Harris, head of global economics at Bank of America Corp., expects a tight labor market to change the picture “from a world of people getting squeezed to wages outpacing prices” later this year, something that would help consumption hold up despite the cost increases.

The downside is that it would also exert persistent upward pressure on inflation and risk a heavier response from the Fed.

The ECI — a key measure of wage inflation and one of the key reasons behind the Fed’s more aggressive pivot last year — is expected to rise at a 1.1% pace in the first quarter. That’d be the third-straight increase of 1% or more, the longest such stretch since 2001.

“This is a potentially more sustainable source of inflation,” Wells Fargo’s House said. “If you get another surprise on the ECI, that could further cement the number of 50-basis-point hikes we might get and how quickly the Fed is looking to get back to neutral.”